4 And he made for the Altar a brasen grate of networke, vnder the compasse thereof, beneath vnto the midst of it.

5 And hee cast foure rings for the foure ends of the grate of brasse, to bee places for the staues.

6 And he made the staues of Shittim wood, and ouerlayed them with brasse.

7 And hee put the staues into the rings on the sides of the Altar, to beare it withall; hee made the Altar hollow with boards.

8 ¶ And hee made the Lauer of brasse, and the foot of it of brasse, of the looking glasses of the women assembling, which assembled at the doore of the Tabernacle of the Congregation.

9 ¶ And he made the Court: on the Southside Southward, the hangings of the Court were of fine twined linnen, a hundred cubits.

10 Their pillars were twenty, and their brasen sockets twentie: the hooks of the pillars, and their fillets were of siluer.

11 And for the North side, the hangings were an hundred cubites, their pillars were twentie, and their sockets of brasse twentie: the hoopes of the pillars, and their fillets of siluer.

12 And for the West side were hangings of fiftie cubites, their pillars ten, and their sockets ten: the hookes of the pillars, and their fillets of siluer.

13 And for the East side Eastward fiftie cubites.

14 The hangings of the one side of the gate were fifteene cubites, their pillars three, and their sockets three.

15 And for the other side of the court gate on this hand and that hand were hangings of fifteene cubites, their pillars three, and their sockets three.

16 All the hangings of the court round about, were of fine twined linnen.

18 And the hanging for the gate of the Court was needle worke, of blew, and purple, and scarlet, and fine twined linnen: and twentie cubites was the length, and the height in the breadth was fiue cubites, answerable to the hangings of the Court.

19 And their pillars were foure, and their sockets of brasse foure, their hookes of siluer, and the ouerlaying of their chapiters, & their fillets of siluer.

20 And all the pinnes of the Tabernacle, and of the court round about, were of brasse.

21 ¶ This is the summe of the Tabernacle, euen of the Tabernacle of Testimonie, as it was counted, according to the commaundement of Moses, for the seruice of the Leuites, by the hand of Ithamar, son to Aaron the Priest.

22 And Bezaleel the sonne of Uri, the sonne of Hur, of the tribe of Iudah, made all that the Lord commanded Moses.

23 And with him was Aholiab, sonne of Ahisamach, of the tribe of Dan, an engrauer, and a cunning workeman, and an embroiderer in blew, and in purple, and in scarlet, and fine linnen.

24 All the gold that was occupied for the worke in all the worke of the holy place, euen the gold of the offring, was twentie and nine talents, and seuen hundred and thirtie shekels, after the shekel of the Sanctuary.

25 And the siluer of them that were numbred of the Congregation, was an hundred talents, and a thousand, seuen hundred and threescore and fifteene shekels, after the shekel of the Sanctuary.

26 A Bekah for euery man, that is, halfe a shekel, after the shekel of the Sanctuary, for euery one that went to be numbred, from twentie yeeres olde and vpward, for sixe hundred thousand, and three thousand, and fiue hundred, and fiftie men.

28 And of the thousand, seuen hundred, seuentie and fiue shekels, he made hookes for the pillars, and ouerlaide their chapiters, and filleted them.

29 And the brasse of the offring was seuentie talents, and two thousand and foure hundred shekels.

30 And therewith he made the sockets to the doore of the Tabernacle of the Congregation, and the brasen Altar, and the brasen grate for it, and all the vessels of the Altar,

The brazen altar and laver. (1-8) The court. (9-20) The offerings of the people. (21-31)1-8 In all ages of the church there have been some persons more devoted to God, more constant in their attendance upon his ordinances, and more willing to part even with lawful things, for his sake, than others. Some women, devoted to God and zealous for the tabernacle worship, expressed zeal by parting with their mirrors, which were polished plates of brass. Before the invention of looking-glasses, these served the same purposes.

9-20 The walls of the court being of curtains only, intimated that the state of the Jewish church itself was movable and changeable; and in due time to be taken down and folded up, when the place of the tent should be enlarged, and its cords lengthened, to make room for the Gentile world.

21-31 The foundation of massy pieces of silver showed the solidity and purity of the truth upon which the church is founded. Let us regard the Lord Jesus Christ while reading of the furniture of the tabernacle. While looking at the altar of burnt-offering, let us see Jesus. In him, his righteousness, and salvation, is a full and sufficient offering for sin. In the laver of regeneration, by his Holy Spirit, let our souls be washed, and they shall be clean; and as the people offered willingly, so may our souls be made willing. Let us be ready to part with any thing, and count all but loss to win Christ.

View All Discussusion for Exodus Chapter 38... 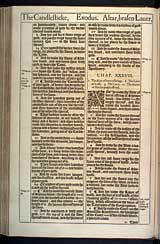