2 And he ouerlaid it with pure gold within & without, and made a crowne of gold to it round about.

4 And he made staues of Shittim wood, and ouerlaid them with gold.

5 And hee put the staues into the rings, by the sides of the Arke, to beare the Arke.

6 ¶ And he made the Mercie seat of pure gold: two cubites and an halfe was the length thereof, and one cubite and an halfe the breadth thereof.

7 And he made two Cherubims of gold, beaten out of one piece made hee them, on the two endes of the Mercie seate:

8 One Cherub on the end on this side, and another Cherub on the other end, on that side: out of the Mercie seat made hee the Cherubims on the two ends thereof.

11 And he ouerlaid it with pure gold, and made thereunto a crowne of gold round about.

12 Also he made thereunto a border of an handbreadth, round about: and made a crowne of gold for the border thereof round about.

13 And hee cast for it foure rings of gold, and put the rings vpon the foure corners that were in the foure feete thereof.

14 Ouer against the border were the rings, the places for the staues, to beare the Table.

15 And he made the staues of Shittim wood, and ouerlayed them with gold, to beare the Table.

16 And hee made the vessels which were vpon the Table, his dishes, and his spoones, and his bowles, and his couers to couer withall, of pure gold.

20 And in the candlesticke were foure bowles made like almonds, his knops, and his flowers:

22 Their knops and their branches were of the same: all of it was one beaten worke of pure gold.

24 Of a talent of pure gold made he it, and all the vessels thereof.

25 ¶ And he made the incense Altar of Shittim wood: the length of it was a cubit, and the breadth of it a cubit: it was foure square, and two cubites was the height of it; the hornes thereof were of the same.

26 And he ouerlayed it with pure gold, both the top of it and the sides thereof round about, and the hornes of it: also he made vnto it a crowne of gold round about.

27 And he made two rings of gold for it vnder the crowne thereof, by the two corners of it, vpon the two sides thereof, to bee places for the staues to beare it withall.

28 And he made the staues of Shittim wood, and ouerlayed them with gold.

29 ¶ And he made the holy anoynting oyle, and the pure incense of sweet spices, according to the worke of the Apothecary.

The making of the ark, and the furniture of the tabernacle.

- In the furniture of the tabernacle were emblems of a spiritual and acceptable service. The incense represented the prayers of the saints. The sacrifice of the alter represented the Lamb of God that taketh away the sins of the world. The golden pot with manna, or bread from heaven, the flesh of Jesus Christ, which he gave for the life of the world. The candlestick, with its lights, the teaching and enlightening of the Holy Spirit. The shew-bread represented that provision for those who hunger and thirst after righteousness, which the gospel, the ordinances and the sacraments of the house of prayer, abundantly bestow. The exactness of the workmen to their rule, should be followed by us; seeking for the influences of the Holy Spirit, that we may rejoice in and glorify God while in this world, and at length be with him for ever.

View All Discussusion for Exodus Chapter 37... 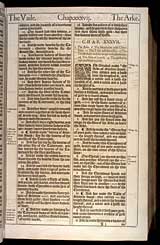