1 In the third moneth when the children of Israel were gone forth out of the land of Egypt, the same day came they into the wildernesse of Sinai.

2 For they were departed from Rephidim, and were come to the desert of Sinai, and had pitched in the wildernesse, and there Israel camped before the mount.

3 And Moses went vp vnto God: and the Lord called vnto him out of the mountaine, saying, Thus shalt thou say to the house of Iacob, and tell the children of Israel:

4 Ye haue seene what I did vnto the Egyptians, and how I bare you on Eagles wings, and brought you vnto my selfe.

5 Now therfore if ye will obey my voice indeed, and keepe my couenant, then ye shall be a peculiar treasure vnto me aboue all people: for all the earth is mine.

6 And ye shall be vnto me a kingdome of Priestes, and an holy nation. These are the wordes which thou shalt speake vnto the children of Israel.

7 ¶ And Moses came and called for the Elders of the people, and layd before their faces all these wordes which the Lord commanded him.

8 And all the people answered together, and said, All that the Lord hath spoken, we will doe. And Moses returned the wordes of the people vnto the Lord.

9 And the Lord said vnto Moses, Loe, I come vnto thee in a thicke cloud, that the people may heare when I speake with thee, and beleeue thee for euer: And Moses told the wordes of the people vnto the Lord.

10 ¶ And the Lord saide vnto Moses, Goe vnto the people, and sanctifie them to day and to morrow, and let them wash their clothes.

11 And be ready against the thirde day: for the third day the Lord will come downe in the sight of all the people, vpon mount Sinai.

12 And thou shalt set bounds vnto the people round about, saying, Take heed to your selues, that ye goe not vp into the mount, or touch the border of it: whosoeuer toucheth the mount, shall be surely put to death.

13 There shall not a hand touch it, but he shall surely be stoned or shot thorow, whether it be beast, or man, it shall not liue: when the trumpet soundeth long, they shall come vp to the mount.

14 ¶ And Moses went downe from the mount vnto the people, and sanctified the people; and they washed their clothes.

15 And hee said vnto the people, Be ready against the third day: come not at your wiues.

16 ¶ And it came to passe on the third day in the morning, that there were thunders and lightnings, and a thicke cloud vpon the mount, and the voyce of the trumpet exceeding lowd, so that all the people that was in the campe, trembled.

17 And Moses brought foorth the people out of the campe to meete with God, and they stood at the nether part of the mount.

18 And mount Sinai was altogether on a smoke, because the Lord descended vpon it in fire: and the smoke thereof ascended as the smoke of a furnace, and the whole mount quaked greatly.

19 And when the voyce of the trumpet sounded long, and waxed lowder and lowder, Moses spake, and God answered him by a voyce.

21 And the Lord said vnto Moses, Goe downe, charge the people, lest they breake thorow vnto the Lord to gaze, and many of them perish.

22 And let the Priestes also which come neere to the Lord, sanctifie themselues, lest the Lord breake foorth vpon them.

23 And Moses said vnto the Lord, The people cannot come vp to mount Sinai: for thou chargedst vs, saying, Set bounds about the mount, and sanctifie it.

24 And the Lord said vnto him, Away, get thee downe, and thou shalt come vp, thou, and Aaron with thee: but let not the Priestes and the people breake through, to come vp vnto the Lord, lest hee breake foorth vpon them.

25 So Moses went downe vnto the people, and spake vnto them.

The people come to Sinai, God's message to them, and their answer. (1-8) The people directed to prepare to hear the law. (9-15) The presence of God on Sinai. (16-25)1-8 Moses was called up the mountain, and was employed as the messenger of this covenant. The Maker and first Mover of the covenant, is God himself. This blessed charter was granted out of God's own free grace. The covenant here mentioned was the national covenant, by which the Israelites were a people under the government of Jehovah. It was a type of the new covenant made with true believers in Christ Jesus; but, like other types, it was only a shadow of good things to come. As a nation they broke this covenant; therefore the Lord declared that he would make a new covenant with Israel, writing his law, not upon tables of stone, but in their hearts, #Jer 31:33; Heb 8:7-10|. The covenant spoken of in these places as ready to vanish away, is the national covenant with Israel, which they forfeited by their sins. Unless we carefully attend to this, we shall fall into mistakes while reading the Old Testament. We must not suppose that the nation of the Jews were under the covenant of works, which knows nothing of repentance, faith in a Mediator, forgiveness of sins, or grace; nor yet that the whole nation of Israel bore the character, and possessed the privileges of true believers, as being actually sharers in the covenant of grace. They were all under a dispensation of mercy; they had outward privileges and advantages for salvation; but, like professing Christians, most rested therein, and went no further. Israel consented to the conditions. They answered as one man, All that the Lord hath spoken we will do. Oh that there had been such a heart in them! Moses, as a mediator, returned the words of the people to God. Thus Christ, the Mediator, as a Prophet, reveals God's will to us, his precepts and promises; and then, as a Priest, offers up to God our spiritual sacrifices, not only of prayer and praise, but of devout affections, and pious resolutions, the work of his own Spirit in us.

9-15 The solemn manner in which the law was delivered, was to impress the people with a right sense of the Divine majesty. Also to convince them of their own guilt, and to show that they could not stand in judgment before God by their own obedience. In the law, the sinner discovers what he ought to be, what he is, and what he wants. There he learns the nature, necessity, and glory of redemption, and of being made holy. Having been taught to flee to Christ, and to love him, the law is the rule of his obedience and faith.

16-25 Never was there such a sermon preached, before or since, as this which was preached to the church in the wilderness. It might be supposed that the terrors would have checked presumption and curiosity in the people; but the hard heart of an unawakened sinner can trifle with the most terrible threatenings and judgments. In drawing near to God, we must never forget his holiness and greatness, nor our own meanness and pollution. We cannot stand in judgment before him according to his righteous law. The convinced transgressor asks, What must I do to be saved? and he hears the voice, Believe in the Lord Jesus Christ, and thou shalt be saved. The Holy Ghost, who made the law to convince of sin, now takes of the things of Christ, and shows them to us. In the gospel we read, Christ hath redeemed us from the curse of the law, being made a curse for us. We have redemption through his blood, even the forgiveness of sins. Through him we are justified from all things, from which we could not be justified by the law of Moses. But the Divine law is binding as a rule of life. The Son of God came down from heaven, and suffered poverty, shame, agony, and death, not only to redeem us from its curse, but to bind us more closely to keep its commands.

View All Discussusion for Exodus Chapter 19... 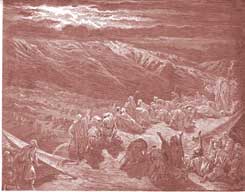 The Giving of the Law on Mount Sinai 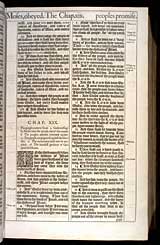