1 Nowe these are the names of the children of Israel, which came into Egypt, euery man & his household, came with Iacob.

5 And all the soules that came out of the loynes of Iacob, were seuentie soules: for Ioseph was in Egypt already.

6 And Ioseph died, and all his brethren, and all that generation.

7 ¶ And the children of Israel were fruitfull, and increased aboundantly, and multiplied, and waxed exceeding mighty, and the land was filled with them.

8 Now there arose vp a new King ouer Egypt, which knew not Ioseph.

9 And he said vnto his people, Behold, the people of the children of Israel are moe and mightier then we.

10 Come on, let vs deale wisely with them, lest they multiply, and it come to passe that when there falleth out any warre, they ioyne also vnto our enemies, and fight against vs, and so get them vp out of the land.

11 Therefore they did set ouer them task-masters, to afflict them with their burdens: And they built for Pharaoh treasure-cities, Pithom and Raamses.

13 And the Egyptians made the children of Israel to serue with rigour.

14 And they made their liues bitter, with hard bondage, in morter and in bricke, and in all maner of seruice in the fielde: all their seruice wherein they made them serue, was with rigour.

15 ¶ And the King of Egypt spake to the Hebrew midwiues, (of which the name of one was Shiphrah, and the name of the other Puah.)

16 And he said, When ye do the office of a midwife to the Hebrew-women, and see them vpon the stooles, if it be a sonne, then ye shall kill him: but if it be a daughter, then shee shall liue.

17 But the midwiues feared God, and did not as the King of Egypt commanded them, but saued the men children aliue.

18 And the King of Egypt called for the midwiues, & said vnto them, Why haue ye done this thing, and haue saued the men children aliue?

19 And the midwiues said vnto Pharaoh, Because the Hebrew women are not as the Egyptian women: for they are liuely, and are deliuered ere the midwiues come in vnto them.

20 Therefore God dealt well with the midwiues: and the people multiplied and waxed very mighty.

21 And it came to passe, because the midwiues feared God, that hee made them houses.

22 And Pharaoh charged all his people, saying, Euery sonne that is borne, yee shall cast into the riuer, and euery daughter ye shall saue aliue.

The Book of Exodus relates the forming of the children of Israel into a church and a nation. We have hitherto seen true religion shown in domestic life, now, we begin to trace its effects upon the concerns of kingdoms and nations. Exodus signifies "the departure;" the chief event therein recorded is the departure of Israel from Egypt and Egyptian bondage; it plainly points out the fulfilling of several promises and prophecies to Abraham respecting his seed, and shadows forth the state of the church, in the wilderness of this world, until her arrival at the heavenly Canaan, an eternal rest.The children of Israel increase in Egypt after the death of Joseph. (8-14) They are oppressed, but multiply exceedingly. (1-7) The men-children destroyed. (15-22)1-7 During more than 200 years, while Abraham, Isaac, and Jacob lived at liberty, the Hebrews increased slowly; only about seventy persons went down into Egypt. There, in about the same number of years, though under cruel bondage, they became a large nation. This wonderful increase was according to the promise long before made unto the fathers. Though the performance of God's promises is sometimes slow, it is always sure.

8-14 The land of Egypt became to Israel a house of bondage. The place where we have been happy, may soon become the place of our affliction; and that may prove the greatest cross to us, of which we said, This same shall comfort us. Cease from man, and say not of any place on this side heaven, This is my rest. All that knew Joseph, loved him, and were kind to his brethren for his sake; but the best and most useful services a man does to others, are soon forgotten after his death. Our great care should be, to serve God, and to please him who is not unrighteous, whatever men are, to forget our work and labour of love. The offence of Israel is, that he prospers. There is no sight more hateful to a wicked man than the prosperity of the righteous. The Egyptians feared lest the children of Israel should join their enemies, and get them up out of the land. Wickedness is ever cowardly and unjust; it makes a man fear, where no fear is, and flee, when no one pursues him. And human wisdom often is foolishness, and very sinful. God's people had task-masters set over them, not only to burden them, but to afflict them with their burdens. They not only made them serve for Pharaoh's profit, but so that their lives became bitter. The Israelites wonderfully increased. Christianity spread most when it was persecuted: the blood of the martyrs was the seed of the church. They that take counsel against the Lord and his Israel, do but imagine a vain thing, and create greater vexation to themselves.

15-22 The Egyptians tried to destroy Israel by the murder of their children. The enmity that is in the seed of the serpent, against the Seed of the woman, makes men forget all pity. It is plain that the Hebrews were now under an uncommon blessing. And we see that the services done for God's Israel are often repaid in kind. Pharaoh gave orders to drown all the male children of the Hebrews. The enemy who, by Pharaoh, attempted to destroy the church in this its infant state, is busy to stifle the rise of serious reflections in the heart of man. Let those who would escape, be afraid of sinning, and cry directly and fervently to the Lord for assistance.

View All Discussusion for Exodus Chapter 1... 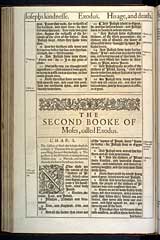