1 On that day did the King Ahasuerus giue the house of Haman, the Iewes enemy, vnto Esther the Queene; and Mordecai came before the King; for Esther hade told what he was vnto her.

2 And the king tooke off his Ring which he had taken from Haman, and gaue it vnto Mordecai. And Esther set Mordecai ouer the house of Haman.

3 ¶ And Esther spake yet againe before the king, and fell downe at his feet, and besought him with teares, to put away the mischiefe of Haman the Agagite, and his deuice, that he had deuised against the Iewes.

4 Then the king helde out the golden scepter toward Esther. So Esther arose, and stood before the king,

5 And said, If it please the king, and if I haue found fauour in his sight, and the thing seeme right before the king, and I bee pleasing in his eyes, let it be written to reuerse the letters deuised by Haman the sonne of Hammedatha the Agagite, which hee wrote to destroy the Iewes, which are in all the kings prouinces.

7 ¶ Then the king Ahasuerus said vnto Esther the Queene, and to Mordecai the Iewe, Behold, I haue giuen Esther the house of Haman, and him they haue hanged vpon the gallowes, because hee layde his hand vpon the Iewes.

10 And he wrote in the king Ahasuerus name, and sealed it with the kings Ring, and sent letters by Postes, on horsebacke, and riders on mules, camels, and yong dromedaries:

11 Wherein the King granted the Iewes, which were in euery citie, to gather themselues together, and to stand for their life, to destroy, to slay, and to cause to perish all the power of the people and prouince that would assault them, both little ones, and women, and to take the spoile of them for a pray:

12 Upon one day, in all the prouinces of king Ahasuerus, namely vpon the thirteenth day of the twelfth moneth, which is the moneth Adar.

13 The copy of the writing, for a commandement to bee giuen in euery prouince, was published vnto all people, and that the Iewes should be readie against that day, to auenge themselues on their enemies.

14 So the posts that rode vpon mules and camels went out, being hastened, and pressed on by the kings commandement, and the decree was giuen at Shushan the palace.

15 ¶ And Mordecai went out from the presence of the king, in royall apparell, of blew and white, and with a great crowne of gold, and with a garment of fine linnen, and purple, and the citie of Shushan reioyced, and was glad:

16 The Iewes had light and gladnesse, and ioy and honour.

17 And in euery prouince, and in euery city, whithersoeuer the kings commandement, and his decree came, the Iewes had ioy and gladnes, a feast and a good day: And many of the people of the land became Iewes; for the feare of the Iewes fell vpon them.

1,2 What Haman would have done mischief with, Esther will do good with. All the trust the king had reposed in Haman, he now placed in Mordecai: a happy change. See the vanity of laying up treasure upon earth; he that heapeth up riches, knoweth not who shall gather them. With what little pleasure, nay, with what constant vexation, would Haman have looked upon his estate, if he could have foreseen that Mordecai, the man he hated above all men in the world, should have rule over all that wherein he had laboured! It is our interest to make sure of those riches which will not be left behind, but which will go with us to another world.

3-14 It was time to be earnest, when the church of God was at stake. Esther, though safe herself, fell down and begged for the deliverance of her people. We read of no tears when she begged for her own life, but although she was sure of that, she wept for her people. Tears of pity and tenderness are the most Christ-like. According to the constitution of the Persian government, no law or decree could be repealed or recalled. This is so far from speaking to the wisdom and honour of the Medes and Persians, that it clearly shows their pride and folly. This savours of that old presumption which ruined all, We will be as gods! It is God's prerogative not to repent, or to say what can never be altered or unsaid. Yet a way was found, by another decree, to authorize the Jews to stand upon their defence. The decree was published in the languages of all the provinces. Shall all the subjects of an earthly prince have his decrees in languages they understand, and shall God's oracles and laws be locked up from any of his servants in an unknown tongue?

15-17 Mordecai's robes now were rich. These things are not worth notice, but as marks of the king's favour, and the fruit of God's favour to his church. It is well with a land, when ensigns of dignity are made the ornaments of serious piety. When the church prospers, many will join it, who will be shy of it when in trouble. When believers have rest, and walk in the fear of the Lord, and the comfort of the Holy Ghost, they will be multiplied. And the attempts of Satan to destroy the church, always tend to increase the number of true Christians.

View All Discussusion for Esther Chapter 8... 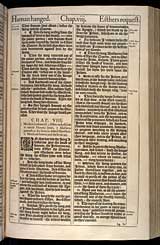