2 And it was so, when the king saw Esther the Queene standing in the court, that shee obtained fauour in his sight: and the king helde out to Esther the golden scepter that was in his hand: So Esther drew neere, and touched the top of the scepter.

3 Then sayd the King vnto her, What wilt thou, Queene Esther? and what is thy request? it shall bee euen giuen thee to the halfe of the kingdome.

4 And Esther answered, If it seeme good vnto the King, let the King and Haman come this day vnto the banquet that I haue prepared for him.

5 Then the King sayd, Cause Haman to make haste, that he may doe as Esther hath said: So the king and Haman came to the banquet that Esther had prepared.

6 ¶ And the king said vnto Esther at the banquet of wine, What is thy petition, and it shall be granted thee? and what is thy request? euen to the halfe of the kingdome it shall be performed.

7 Then answered Esther, and said, My petition, and my request is,

8 If I haue found fauour in the sight of the king, and if it please the king to grant my petition, and to performe my request, let the king, and Haman, come to the banquet that I shall prepare for them, and I wil do to morow, as the king hath said.

9 ¶ Then went Haman foorth that day, ioyfull, and with a glad heart: but when Haman saw Mordecai in the kings gate, that hee stood not vp, nor mooued for him, hee was full of indignation against Mordecai.

10 Neuerthelesse Haman refrained himselfe, and when he came home, hee sent and called for his friends, and Zeresh his wife.

11 And Haman told them of the glory of his riches, and the multitude of his children, and all the things wherein the king had promoted him, and how he had aduanced him aboue the Princes, and seruants of the king.

12 Haman said moreouer, Yea Esther the Queene did let no man come in with the king vnto the banquet that she had prepared, but my selfe; and to morrow am I inuited vnto her also with the king.

13 Yet all this auaileth me nothing, so long as I see Mordecai the Iew sitting at the kings gate.

14 ¶ Then saide Zeresh his wife, and all his friends vnto him, Let a gallous be made of fifty cubits hie, and to morrow speake thou vnto the king, that Mordecai may be hanged thereon: then goe thou in merily with the king vnto the banquet. And the thing pleased Haman, and hee caused the gallous to be made.

1-8 Esther having had power with God, and prevailing, like Jacob, had power with men too. He that will lose his life for God, shall save it, or find it in a better life. The king encouraged her. Let us from this be encouraged to pray always to our God, and not to faint. Esther came to a proud, imperious man; but we come to the God of love and grace. She was not called, but we are; the Spirit says, Come, and the Bride says, Come. She had a law against her, we have a promise, many a promise, in favour of us; Ask, and it shall be given you. She had no friend to go with her, or to plead for her; on the contrary, he that was then the king's favourite, was her enemy; but we have an Advocate with the Father, in whom he is well pleased. Let us therefore come boldly to the throne of grace. God put it into Esther's heart to delay her petition a day longer; she knew not, but God did, what was to happen in that very night.

9-14 This account of Haman is a comment upon #Pr 21:24|. Self-admirers and self-flatterers are really self-deceivers. Haman, the higher he is lifted up, the more impatient he is of contempt, and the more enraged at it. The affront from Mordecai spoiled all. A slight affront, which a humble man would scarcely notice, will torment a proud man, even to madness, and will mar all his comforts. Those disposed to be uneasy, will never want something to be uneasy at. Such are proud men; though they have much to their mind, if they have not all to their mind, it is as nothing to them. Many call the proud happy, who display pomp and make a show; but this is a mistaken thought. Many poor cottagers feel far less uneasiness than the rich, with all their fancied advantages around them. The man who knows not Christ, is poor though he be rich, because he is utterly destitute of that which alone is true riches.

View All Discussusion for Esther Chapter 5... 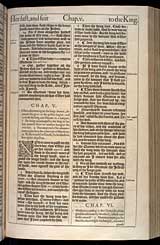