1 After these things did king Ahasuerus promote Haman, the sonne of Amedatha the Agagite, and aduanced him, and set his seate aboue all the princes that were with him.

2 And all the kings seruants, that were in the kings gate, bowed, and reuerenced Haman, for the king had so commanded concerning him: but Mordecai bowed not, nor did him reuerence.

3 Then the kings seruants, which were in the kings gate, sayd vnto Mordecai, Why transgressest thou the kings commandement?

4 Now it came to passe, when they spake daily vnto him, and he hearkened not vnto them; that they told Haman, to see whether Mordecai his matters would stand, for he had told them that he was a Iewe.

5 And when Haman saw that Mordecai bowed not, nor did him reuerence, then was Haman full of wrath.

8 ¶ And Haman saide vnto king Ahasuerus: There is a certaine people scattered abroad, and dispersed among the people, in all the prouinces of thy kingdome, and their lawes are diuerse from all people, neither keepe they the kings lawes; therefore it is not for the kings profit to suffer them.

9 If it please the king, let it be written, that they may be destroyed: and I will pay ten thousand talents of siluer to the handes of those that haue the charge of the businesse, to bring it into the kings treasuries.

10 And the king tooke his ring from his hand, and gaue it vnto Haman the sonne of Ammedatha the Agagite, the Iewes enemie.

11 And the king saide vnto Haman, The siluer is giuen to thee, the people also, to doe with them, as it seemeth good to thee.

12 Then were the kings scribes called on the thirteenth day of the first moneth, and there was written, according to all that Haman had commanded, vnto the kings Lieutenants, and to the gouernours, that were ouer euery prouince, and to the rulers of euery people of euery prouince, according to the writing thereof, and to euery people, after their language, in the name of king Ahasuerus was it written, and sealed with the kings ring.

13 And the letters were sent by posts into all the kings prouinces, to destroy, to kill, and to cause to perish all Iewes, both yong and olde, litle children and women, in one day, euen vpon the thirteenth day of the twelfth moneth (which is the moneth Adar) and to take the spoile of them for a pray.

14 The copie of the writing for a commandement to bee giuen in euery prouince, was published vnto all people, that they should bee ready against that day.

15 The postes went out, being hastened by the kings commandement, and the decree was giuen in Shushan the palace: and the king and Haman sate downe to drinke, but the citie Shushan was perplexed.

1-6 Mordecai refused to reverence Haman. The religion of a Jew forbade him to give honours to any mortal man which savoured of idolatry, especially to so wicked a man as Haman. By nature all are idolaters; self is our favourite idol, we are pleased to be treated as if every thing were at our disposal. Though religion by no means destroys good manners, but teaches us to render honour to whom honour is due, yet by a citizen of Zion, not only in his heart, but in his eyes, such a vile person as Haman was, is contemned, #Ps 15:4|. The true believer cannot obey edicts, or conform to fashions, which break the law of God. He must obey God rather than man, and leave the consequences to him. Haman was full of wrath. His device was inspired by that wicked spirit, who has been a murderer from the beginning; whose enmity to Christ and his church, governs all his children.

7-15 Without some acquaintance with the human heart, and the history of mankind, we should not think that any prince could consent to a dreadful proposal, so hurtful to himself. Let us be thankful for mild and just government. Haman inquires, according to his own superstitions, how to find a lucky day for the designed massacre! God's wisdom serves its own purposes by men's folly. Haman has appealed to the lot, and the lot, by delaying the execution, gives judgment against him. The event explains the doctrine of a particular providence over all the affairs of men, and the care of God over his church. Haman was afraid lest the king's conscience should smite him for what he had done; to prevent which, he kept him drinking. This cursed method many often take to drown convictions, and to harden their own hearts, and the hearts of others, in sin. All appeared in a favourable train to accomplish the project. But though sinners are permitted to proceed to the point they aim at, an unseen but almighty Power turns them back. How vain and contemptible are the strongest assaults against Jehovah! Had Haman obtained his wish, and the Jewish nation perished, what must have become of all the promises? How could the prophecies concerning the great Redeemer of the world have been fulfilled? Thus the everlasting covenant itself must have failed, before this diabolical project could take place.

View All Discussusion for Esther Chapter 3... 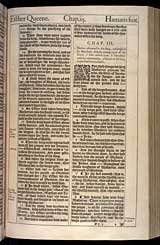