1 There shall no euill happen vnto him that feareth the Lord, but in temptation euen againe he will deliuer him.

2 A wise man hateth not the Law, but he that is an hypocrite therein, is as a ship in a storme.

3 A man of vnderstanding trusteth in the Law, and the Law is faithfull vnto him, as an oracle.

4 Prepare what to say, and so thou shalt be heard, and binde vp instruction, and then make answere.

5 The heart of the foolish is like a cartwheele: and his thoughts are like a rolling axeltree.

6 A stallion horse is as a mocking friend, hee neigheth vnder euery one that sitteth vpon him.

7 Why doth one day excell another? when as all the light of euery day in the yeere is of the Sunne.

8 By the knowledge of the Lord they were distinguished: and he altered seasons and feasts.

10 And all men are from the ground, and Adam was created of earth.

11 In much knowledge the Lord hath diuided them, and made their wayes diuers.

13 As the clay is in the potters hand to fashion it at his pleasure: so man is in the hand of him that made him, to render to them as liketh him best.

15 So looke vpon all the workes of the most High, and there are two and two, one against another.

16 I awaked vp last of all, as one that gathereth after the grape-gatherers: by the blessing of the Lord I profited, and filled my wine-presse, like a gatherer of grapes.

17 Consider that I laboured not for my selfe onely, but for all them that seeke learning;

18 Heare me, O ye great men of the people, and hearken with your eares ye rulers of the Congregation:

19 Giue not thy sonne, and wife, thy brother and friend power ouer thee while thou liuest, and giue not thy goods to another, lest it repent thee: and thou intreat for the same againe.

20 As long as thou liuest and hast breath in thee, giue not thy selfe ouer to any.

21 For better it is that thy children should seeke to thee, then that thou shouldst stand to their courtesie.

22 In all thy workes keepe to thy selfe the preheminence, leaue not a staine in thine honour.

23 At the time when thou shalt end thy dayes, and finish thy life, distribute thine inheritance.

24 Fodder, a wand, and burdens, are for the asse: and bread, correction, and worke for a seruant.

25 If thou set thy seruant to labour, thou shalt finde rest: but if thou let him goe idle, he shall seeke libertie.

26 A yoke and a collar doe bow the necke: so are tortures and torments for an euill seruant.

27 Sende him to labour that hee be not idle: for idlenesse teacheth much euill.

28 Set him to worke, as is fit for him; if he be not obedient, put on more heauy fetters.

29 But be not excessiue toward any, and without discretion doe nothing.

30 If thou haue a seruant, let him bee vnto thee as thy selfe, because thou hast bought him with a price.

31 If thou haue a seruant, intreate him as a brother: for thou hast neede of him, as of thine owne soule: if thou intreate him euill, and he runne from thee, which way wilt thou goe to seeke him?

View All Discussusion for Ecclesiasticus Chapter 33... 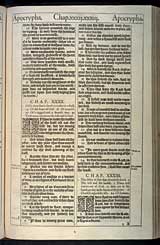