1 The Lord created man of the earth, and turned him into it againe.

2 He gaue them few dayes, and a short time, and power also ouer the things therein.

3 He endued them with strength by themselues, and made them according to his image,

4 And put the feare of man vpon all flesh, and gaue him dominion ouer beasts and foules.

5 They receiued the vse of the fiue operations of the Lord, and in the sixt place he imparted them vnderstanding, and in the seuenth, speech, an interpreter of the cogitations thereof.

6 Counsell, and a tongue, and eyes, eares, and a heart, gaue he them to vnderstand.

7 Withall, hee filled them with the knowledge of vnderstanding, & shewed them good and euill.

8 Hee set his eye vpon their hearts, that he might shew them the greatnesse of his workes.

9 He gaue them to glory in his marueilous actes for euer, that they might declare his works with vnderstanding.

10 And the elect shall praise his holy Name.

11 Beside this he gaue them knowledge, and the law of life for an heritage.

12 He made an euerlasting couenant with them, and shewed them his iudgements.

13 Their eyes saw the maiestie of his glory, and their eares heard his glorious voyce.

14 And he said vnto them, Beware of all vnrighteousnes, and he gaue euery man commandement concerning his neighbour,

15 Their wayes are euer before him, and shall not be hid from his eyes.

16 Euery man from his youth is giuen to euil, neither could they make to themselues fleshie hearts for stonie.

17 For in the diuision of the nations of the whole earth, he set a ruler ouer euery people, but Israel is the Lords portion.

18 Whom being his first borne, hee nourisheth with discipline, and giuing him the light of his loue, doth not forsake him.

19 Therefore all their workes are as the Sunne before him, and his eyes are continually vpon their wayes.

20 None of their vnrighteous deeds are hid from him, but all their sinnes are before the Lord:

21 But the Lord being gracious, and knowing his workemanship, neither left nor forsooke them, but spared them.

22 The almes of a man is as a signet with him, and he will keep the good deedes of man, as the apple of the eye, and giue repentance to his sonnes and daughters.

23 Afterward he will rise vp and reward them, and render their recompense vpon their heads.

24 But vnto them that repent, he granted them returne, and comforted those that faile in patience.

25 Returne vnto the Lord, and forsake thy sinnes, make thy prayer before his face, and offend lesse.

26 Turne againe to the most High, and turne away from iniquitie: for he will leade thee out of darkenesse into the light of health, and hate thou abomination vehemently.

27 Who shall praise the most High in the graue, in stead of them which liue and giue thanks?

28 Thankesgiuing perisheth from the dead, as from one that is not: the liuing and sound in heart, shall praise the Lord.

29 How great is the louing kindnes of the Lord our God, and his compassion vnto such as turne vnto him in holinesse?

30 For all things cannot bee in men, because þe sonne of man is not immortal.

31 What is brighter then the Sun? yet the light thereof faileth: and flesh and blood will imagine euill.

32 Hee vieweth the power of the height of heauen, and all men are but earth and ashes.

View All Discussusion for Ecclesiasticus Chapter 17... 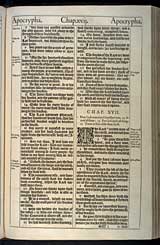