1 Desire not a multitude of vnprofitable children, neither delight in vngodly sonnes.

2 Though they multiply, reioyce not in them, except the feare of the Lord be with them.

3 Trust not thou in their life, neither respect their multitude: for one that is iust, is better then a thousand, and better it is to die without children, then to haue them that are vngodly.

4 For by one that hath vnderstanding, shall the city be replenished, but the kindred of the wicked, shall speedily become desolate.

5 Many such things haue I seene with mine eyes, and mine eare hath heard greater things then these.

6 In the congregation of the vngodly, shall a fire be kindled, and in a rebellious nation, wrath is set on fire.

7 Hee was not pacified towards the olde giants, who fell away in the strength of their foolishnesse.

8 Neither spared he the place where Lot soiourned, but abhorred them for their pride.

9 Hee pitied not the people of perdition, who were taken away in their sinnes.

10 Nor the sixe hundreth thousand footmen, who were gathered together in the hardnesse of their hearts.

11 And if there be one stiffe-necked among the people, it is marueile, if he escape vnpunished; for mercy and wrath are with him, hee is mighty to forgiue, and to powre out displeasure.

12 As his mercy is great, so is his correction also: he iudgeth a man according to his workes.

13 The sinner shall not escape with his spoiles, and the patience of the godly shall not be frustrate.

14 Make way for euery worke of mercy: for euery man shall finde according to his workes.

15 The Lord hardened Pharaoh, that hee should not know him, that his powerfull workes might be knowen to the world.

16 His mercy is manifest to euery creature, and hee hath separated his light from the darkenesse with an Adamant.

17 Say not thou, I will hide my selfe from the Lord: shall any remember me from aboue? I shall not be remembred among so many people: for what is my soule among such an infinite number of creatures?

18 Behold, the heauen, and the heauen of heauens, the deepe and the earth, and all that therein is, shall be mooued when he shall visit.

19 The mountaines also, and foundations of the earth shall bee shaken with trembling, when the Lord looketh vpon them.

20 No heart can thinke vpon these things worthily: and who is able to conceiue his wayes?

21 It is a tempest, which no man can see: for the most part of his workes are hidde.

22 Who can declare the workes of his iustice? or who can endure them? for his Couenant is afarre off, and the triall of all things is in the ende.

23 He that wanteth vnderstanding, will thinke vpon vaine things: and a foolish man erring, imagineth follies.

24 My sonne, hearken vnto mee, and learne knowledge, and marke my words with thy heart.

25 I will shewe foorth doctrine in weight, and declare his knowledge exactly.

26 The works of the Lord are done in iudgement from the beginning: and from the time he made them, hee disposed the parts thereof.

27 Hee garnished his workes for euer, and in his hand are the chiefe of them vnto all generations: they neither labour, nor are weary, nor cease from their workes.

28 None of them hindreth another, and they shall neuer disobey his word.

29 After this, the Lord looked vpon the earth, and filled it with his blessings.

30 With all maner of liuing things hath hee couered the face thereof, and they shall returne into it againe.

View All Discussusion for Ecclesiasticus Chapter 16... 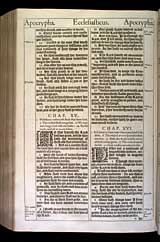