1 Who is as the Wise man? and who knoweth the interpretation of a thing? a mans wisedome maketh his face to shine, and the boldnes of his face shalbe changed.

2 I counsell thee, to keepe the kings commandement, and that in regard of the oath of God.

3 Bee not hastie to goe out of his sight: stand not in an euill thing, for he doeth whatsoeuer pleaseth him.

4 Where the word of a king is, there is power: and who may say vnto him, What doest thou?

5 Whoso keepeth the commandement, shall feele no euill thing: and a wise mans heart discerneth both time and iudgement.

6 ¶ Because to euery purpose there is time, and iudgement; therefore the misery of man is great vpon him.

7 For hee knoweth not that which shall be: for who can tell him, when it shall be?

8 There is no man that hath power ouer the spirit to retaine the spirit; neither hath he power in the day of death: and there is no discharge in that warre, neither shall wickednesse deliuer those that are giuen to it.

9 All this haue I seene, and applied my heart vnto euery worke that is done vnder the Sunne: there is a time wherein one man ruleth ouer another to his owne hurt.

10 And so I saw the wicked buried, who had come, and gone from the place of the Holy, and they were forgotten in the city, where they had so done: this is also vanitie.

11 Because sentence against an euill worke is not executed speedily; therefore the heart of the sonnes of men is fully set in them to doe euill.

12 ¶ Though a sinner doe euill an hundred times, and his dayes be prolonged; yet surely I know that it shall be well with them that feare God, which feare before him.

13 But it shall not be well with the wicked, neither shall hee prolong his dayes which are as a shadow; because he feareth not before God.

15 Then I commended mirth, because a man hath no better thing vnder the Sunne, then to eate and to drinke, and to be merrie: for that shall abide with him of his labour, the dayes of his life, which God giueth him vnder the Sunne.

16 ¶ When I applied mine heart to know wisedome, and to see the busines that is done vpon the earth: (for also there is that neither day nor night seeth sleepe with his eyes.)

17 Then I behelde all the worke of God, that a man cannot finde out the worke that is done vnder the Sunne: because though a man labour to seeke it out, yea further though a wise man thinke to know it, yet shall hee not be able to finde it.

Commendations of wisdom. (1-5) To prepare for sudden evils and death. (6-8) It shall be well with the righteous, and ill with the wicked. (9-13) Mysteries of Providence. (14-17)1-5 None of the rich, the powerful, the honourable, or the accomplished of the sons of men, are so excellent, useful, or happy, as the wise man. Who else can interpret the words of God, or teach aright from his truths and dispensations? What madness must it be for weak and dependent creatures to rebel against the Almighty! What numbers form wrong judgments, and bring misery on themselves, in this life and that to come!

6-8 God has, in wisdom, kept away from us the knowledge of future events, that we may be always ready for changes. We must all die, no flight or hiding-place can save us, nor are there any weapons of effectual resistance. Ninety thousand die every day, upwards of sixty every minute, and one every moment. How solemn the thought! Oh that men were wise, that they understood these things, that they would consider their latter end! The believer alone is prepared to meet the solemn summons. Wickedness, by which men often escape human justice, cannot secure from death.

9-13 Solomon observed, that many a time one man rules over another to his hurt, and that prosperity hardens them in their wickedness. Sinners herein deceive themselves. Vengeance comes slowly, but it comes surely. A good man's days have some substance; he lives to a good purpose: a wicked man's days are all as a shadow, empty and worthless. Let us pray that we may view eternal things as near, real, and all-important.

14-17 Faith alone can establish the heart in this mixed scene, where the righteous often suffer, and the wicked prosper. Solomon commended joy, and holy security of mind, arising from confidence in God, because a man has no better thing under the sun, though a good man has much better things above the sun, than soberly and thankfully to use the things of this life according to his rank. He would not have us try to give a reason for what God does. But, leaving the Lord to clear up all difficulties in his own time, we may cheerfully enjoy the comforts, and bear up under the trials of life; while peace of conscience and joy in the Holy Ghost will abide in us through all outward changes, and when flesh and heart shall fail.

View All Discussusion for Ecclesiastes Chapter 8... 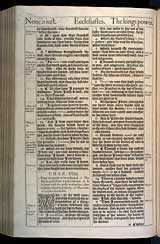