3 Then I lifted vp mine eyes, and saw, and behold, there stood before the riuer, a ramme which had two hornes, and the two hornes were high: but one was higher then the other, and the higher came vp last.

4 I saw the ramme pushing Westward, & Northward, and Southward: so that no beasts might stand before him, neither was there any that could deliuer out of his hand, but he did according to his will, and became great.

5 And as I was considering, behold, an he goat came frō the west on the face of the whole earth, & touched not the ground: and the goate had a notable horne betweene his eyes.

6 And he came to the ramme that had two hornes, which I had seene standing before the riuer, and ranne vnto him in the furie of his power.

8 Therefore the hee goate waxed very great, and when he was strong, the great horne was broken: and for it came vp foure notable ones, toward the foure windes of heauen.

10 And it waxed great euen to the hoste of heauen, and it cast downe some of the hoste, and of the starres to the ground, and stamped vpon them.

11 Yea he magnified himselfe euen to the prince of the hoste, and by him the dayly sacrifice was taken away, and the place of his Sanctuary was cast down.

12 And an hoste was giuen him against the daily sacrifice by reason of transgression, and it cast downe the trueth to the ground, and it practised, and prospered.

13 ¶ Then I heard one Saint speaking, and another Saint saide vnto that certaine Saint which spake, How long shall bee the vision concerning the daily sacrifice, and the transgression of desolation, to giue both the Sanctuary, and the hoste to be troden vnder foot?

14 And he said vnto me, Unto two thousand and three hundred dayes: then shall the Sanctuary be clensed.

15 ¶ And it came to passe, when I, euen I Daniel had seene the vision, and sought for the meaning, then beholde, there stood before me as the appearance of a man.

16 And I heard a mans voyce betweene the bankes of Ulai, which called and said, Gabriel, make this man to vnderstand the vision.

17 So he came neere where I stood: and when he came, I was afraid, and fell vpon my face: but he said vnto mee, Understand, O sonne of man: for at the time of the end shalbe the vision.

18 Now as he was speaking with me, I was in a deepe sleepe on my face toward the ground: but he touched me, and set me vpright.

19 And he said, Behold, I wil make thee know what shall be in the last end of the indignation: for at the time appointed the end shalbe.

20 The ramme which thou sawest hauing two hornes, are the kings of Media, and Persia.

21 And the rough goat is the king of Grecia, and the great horne that is betweene his eyes, is the first king.

22 Now that being broken, whereas foure stood vp for it, foure kingdomes shall stand vp out of the nation, but not in his power.

23 And in the latter time of their kingdome, when the transgressours are come to the full, a king of fierce countenance, and vnderstanding darke sentences, shall stand vp.

25 And through his policie also hee shall cause craft to prosper in his hand, and hee shall magnifie himselfe in his heart, and by peace shal destroy many: he shall also stand vp against the prince of princes, but he shalbe broken without hand.

26 And the vision of the euening, and the morning, which was tolde, is true: wherfore shut thou vp the vision, for it shalbe for many dayes.

27 And I Daniel fainted and was sicke certaine dayes: afterward I rose vp and did the kings businesse, and I was astonished at the vision, but none vnderstood it.

Daniel's vision of the ram and the he-goat. (1-14) The interpretation of it. (15-27)1-14 God gives Daniel a foresight of the destruction of other kingdoms, which in their day were as powerful as that of Babylon. Could we foresee the changes that shall be when we are gone, we should be less affected with changes in our own day. The ram with two horns was the second empire, that of Media and Persia. He saw this ram overcome by a he-goat. This was Alexander the Great. Alexander, when about thirty-three years of age, and in his full strength, died, and showed the vanity of worldly pomp and power, and that they cannot make a man happy. While men dispute, as in the case of Alexander, respecting the death of some prosperous warrior, it is plain that the great First Cause of all had no more of his plan for him to execute, and therefore cut him off. Instead of that one great horn, there came up four notable ones, Alexander's four chief captains. A little horn became a great persecutor of the church and people of God. It seems that the Mohammedan delusion is here pointed out. It prospered, and at one time nearly destroyed the holy religion God's right hand had planted. It is just with God to deprive those of the privileges of his house who despise and profane them; and to make those know the worth of ordinances by the want of them, who would not know it by the enjoyment of them. Daniel heard the time of this calamity limited and determined; but not the time when it should come. If we would know the mind of God, we must apply to Christ, in whom are hid all the treasures of wisdom and knowledge; not hid from us, but hid for us. There is much difficulty as to the precise time here stated, but the end of it cannot be very distant. God will, for his own glory, see to the cleansing of the church in due time. Christ died to cleanse his church; and he will so cleanse it as to present it blameless to himself.

15-27 The eternal Son of God stood before the prophet in the appearance of a man, and directed the angel Gabriel to explain the vision. Daniel's fainting and astonishment at the prospect of evils he saw coming on his people and the church, confirm the opinion that long-continued calamities were foretold. The vision being ended, a charge was given to Daniel to keep it private for the present. He kept it to himself, and went on to do the duty of his place. As long as we live in this world we must have something to do in it; and even those whom God has most honoured, must not think themselves above their business. Nor must the pleasure of communion with God take us from the duties of our callings, but we must in them abide with God. All who are intrusted with public business must discharge their trust uprightly; and, amidst all doubts and discouragements, they may, if true believers, look forward to a happy issue. Thus should we endeavour to compose our minds for attending to the duties to which each is appointed, in the church and in the world.

View All Discussusion for Daniel Chapter 8... 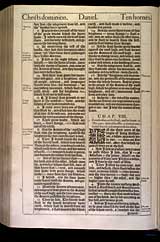