1 In the first yeere of Belshazzar king of Babylon, Daniel had a dreame, and visions of his head vpon his bed: then he wrote the dreame, and tolde the summe of the matters.

2 Daniel spake, and said, I saw in my vision by night, & behold, the foure windes of the heauen stroue vpon the great Sea.

3 And foure great beastes came vp from the sea, diuers one from another.

4 The first was like a Lyon, and had Eagles wings: I beheld till the wings thereof were pluckt, and it was lifted vp from the earth, and made stand vpon the feete as a man, and a mans heart was giuen to it.

5 And behold, another beast, a second, like to a Beare, and it raised vp it selfe on one side, and it had three ribbes in the mouth of it betweene the teeth of it, and they said thus vnto it, Arise, deuoure much flesh.

6 After this I beheld, and loe, another like a Leopard, which had vpon the backe of it foure wings of a foule, the beast had also foure heads, and dominion was giuen to it.

7 After this I saw in the night visions, and behold, a fourth beast, dreadfull and terrible, and strong exceedingly; and it had great yron teeth: it deuoured and brake in pieces, and stamped the residue with the feete of it, and it was diuers from all the beasts that were before it, and it had ten hornes.

8 I considered the hornes, and behold, there came vp among them another little horne, before whom there were three of the first hornes pluckt vp by the roots: and behold, in this horne were eyes like the eyes of man, and a mouth speaking great things.

9 ¶ I beheld till the thrones were cast downe, and the Ancient of dayes did sit, whose garment was white as snow, and the haire of his head like the pure wooll: his throne was like the fierie flame, and his wheeles as burning fire.

11 I beheld then, because of the voice of the great words which the horne spake: I beheld euen till the beast was slaine, and his body destroyed, and giuen to the burning flame.

12 As concerning the rest of the beasts, they had their dominion taken away: yet their liues were prolonged for a season and time.

13 I saw in the night visions, and behold, one like the sonne of man, came with the clouds of heauen, and came to the Ancient of daies, and they brought him neere before him.

14 And there was giuen him dominion and glory, and a kingdome, that all people, nations, and languages should serue him: his dominion is an euerlasting dominion, which shall not passe away; and his kingdome that, which shall not be destroyed.

15 ¶ I Daniel was grieued in my spirit in the midst of my body, and the visions of my head troubled me.

16 I came neere vnto one of them that stood by, and asked him the truth of all this: so he told mee, and made me know the interpretation of the things.

17 These great beasts, which are foure, are foure Kings, which shall arise out of the earth.

18 But the Saints of the most high shall take the kingdome, & possesse the kingdome for euer, euen for euer & euer.

19 Then I would know the truth of the fourth beast, which was diuerse from al the others, exceeding dreadful, whose teeth were of yron, and his nailes of brasse, which deuoured, brake in pieces, and stamped the residue with his feete,

20 And of the ten hornes that were in his head, and of the other, which came vp, and before whom three fell, euen of that horne that had eyes, and a mouth that spake very great things, whose looke was more stout then his fellowes.

21 I beheld, and the same horne made warre with the Saints, and preuailed against them;

22 Untill the Ancient of daies came, and iudgment was giuen to the Saints of the most high: and the time came that the Saints possessed the kingdome.

23 Thus he said, The fourth beast shall be the fourth kingdome vpon earth, which shall be diuerse from all kingdomes, & shall deuoure the whole earth, and shall tread it downe, and breake it in pieces.

24 And the tenne hornes out of this kingdome are tenne Kings that shall arise: and an other shall rise after them, and he shall be diuerse from the first, and he shall subdue three Kings.

25 And he shall speake great words against the most high, and shall weare out the Saints of the most high, and thinke to change times, and lawes: and they shall be giuen into his hand, vntill a time and times, & the diuiding of time.

26 But the iudgement shall sit, and they shall take away his dominion, to consume, and to destroy it vnto the end.

27 And the kingdome and dominion, and the greatnesse of the kingdome vnder the whole heauen, shall be giuen to the people of the Saints of the most high, whose kingdome is an euerlasting kingdome, and all dominions shall serue and obey him.

28 Hitherto is the end of the matter. As for me Daniel, my cogitations much troubled me, and my countenance changed in me: but I kept the matter in my heart.

Daniel's vision of the four beasts. (1-8) and of Christ's kingdom. (9-14) The interpretation. (15-28)1-8 This vision contains the same prophetic representations with Nebuchadnezzar's dream. The great sea agitated by the winds, represented the earth and the dwellers on it troubled by ambitious princes and conquerors. The four beasts signified the same four empires, as the four parts of Nebuchadnezzar's image. Mighty conquerors are but instruments of God's vengeance on a guilty world. The savage beast represents the hateful features of their characters. But the dominion given to each has a limit; their wrath shall be made to praise the Lord, and the remainder of it he will restrain.

9-14 These verses are for the comfort and support of the people of God, in reference to the persecutions that would come upon them. Many New Testament predictions of the judgment to come, have plain allusion to this vision; especially #Re 20:11,12|. The Messiah is here called the Son of man; he was made in the likeness of sinful flesh, and was found in fashion as a man, but he is the Son of God. The great event foretold in this passage, is Christ's glorious coming, to destroy every antichristian power, and to render his own kingdom universal upon earth. But ere the solemn time arrives, for manifesting the glory of God to all worlds in his dealings with his creatures, we may expect that the doom of each of us will be determined at the hour of our death; and before the end shall come, the Father will openly give to his incarnate Son, our Mediator and Judge, the inheritance of the nations as his willing subjects.

15-28 It is desirable to obtain the right and full sense of what we see and hear from God; and those that would know, must ask by faithful and fervent prayer. The angel told Daniel plainly. He especially desired to know respecting the little horn, which made war with the saints, and prevailed against them. Here is foretold the rage of papal Rome against true Christians. St. John, in his visions and prophecies, which point in the first place at Rome, has plain reference to these visions. Daniel had a joyful prospect of the prevalence of God's kingdom among men. This refers to the second coming of our blessed Lord, when the saints shall triumph in the complete fall of Satan's kingdom. The saints of the Most High shall possess the kingdom for ever. Far be it from us to infer from hence, that dominion is founded on grace. It promises that the gospel kingdom shall be set up; a kingdom of light, holiness, and love; a kingdom of grace, the privileges and comforts of which shall be the earnest and first-fruits of the kingdom of glory. But the full accomplishment will be in the everlasting happiness of the saints, the kingdom that cannot be moved. The gathering together the whole family of God will be a blessedness of Christ's coming.

View All Discussusion for Daniel Chapter 7... 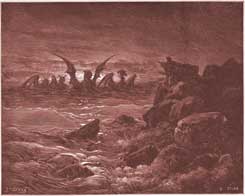 Daniel's Vision of the Four Beasts 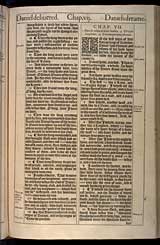