1 Nebuchad-nezzar the king, vnto all people, nations, and languages that dwell in all the earth, Peace be multiplied vnto you.

2 I thought it good to shew the signes, and wonders, that the high God hath wrought toward me.

3 How great are his signes? and how mighty are his wonders? his kingdome is an euerlasting kingdome, and his dominion is frō generation to generation.

4 ¶ I Nebuchadnezzar was at rest in mine house, and flourishing in my palace.

5 I saw a dreame which made me afraid, and the thoughts vpon my bed, and the visions of my head troubled me.

6 Therefore made I a decree, to bring in all the wise men of Babylon before mee, that they might make knowen vnto me the interpretation of the dreame.

7 Then came in the Magicians, the Astrologers, the Caldeans, and the Southsayers: and I tolde the dreame before them; but they did not make knowen vnto mee the interpretation thereof.

8 ¶ But at the last Daniel came in before me, (whose name was Belteshazzar, according to the name of my God, and in whom is the spirit of the holy Gods) & before him I told the dreame, saying,

9 O Belteshazzar, master of the Magicians, because I know that the spirit of the holy Gods is in thee, and no secret troubleth thee, tell me the visions of my dreame that I haue seene, and the interpretation thereof.

10 Thus were the visions of mine head in my bed: I saw, and behold, a tree in the middest of the earth, and the height thereof was great.

11 The tree grew, and was strong, and the height thereof reached vnto heauen, and the sight thereof to the end of all the earth.

12 The leaues thereof were faire, and the fruite thereof much, and in it was meate for all: the beasts of the field had shadow vnder it, and the foules of the heauen dwelt in the boughes thereof, and all flesh was fed of it.

13 I sawe in the visions of my head vpon my bed, & behold, a watcher and an holy one came downe from heauen.

14 He cryed aloude, and said thus; Hew downe the tree, and cut off his branches; shake off his leaues, and scatter his fruite; let the beasts get away from vnder it, and the foules from his branches.

15 Neuerthelesse leaue the stumpe of his rootes in the earth, euen with a band of yron and brasse, in the tender grasse of the field, and let it be wet with the dew of heauen, and let his portion be with the beastes in the grasse of the earth.

16 Let his heart bee changed from mans, and let a beasts heart be giuen vnto him, and let seuen times passe ouer him.

17 This matter is by the decree of the watchers, and the demaund by the word of the Holy ones: to the intent that the liuing may know, that the most High ruleth in the kingdome of men, and giueth it to whomsoeuer hee will, and setteth vp ouer it the basest of men.

18 This dreame, I king Nebuchadnezzar haue seene: Now thou, O Belteshazzar, declare the interpretation thereof, forasmuch as all the Wise men of my kingdome are not able to make knowen vnto mee the interpretation: but thou art able, for the spirit of the holy Gods is in thee.

20 The tree that thou sawest, which grew, and was strong, whose height reached vnto the heauen, and the sight thereof to all the earth:

21 Whose leaues were faire, and the fruit thereof much, and in it was meate for all, vnder which the beasts of the field dwelt, and vpon whose branches the foules of the heauen had their habitation:

22 It is thou, O King, that art growen and become strong: for thy greatnesse is growen and reacheth vnto heauen, and thy dominion to the end of the earth.

23 And whereas the King saw a watcher, and an holy one comming downe from heauen, and saying, Hew the tree downe, and destroy it, yet leaue the stumpe of the rootes thereof in the earth, euen with a band of yron and brasse in the tender grasse of the field, and let it be wet with the dewe of heauen, and let his portion be with the beasts of the field, till seuen times passe ouer him:

24 This is the interpretation, O king, & this is the decree of the most Hie, which is come vpon my lord the king:

25 That they shall driue thee from men, and thy dwelling shall be with the beasts of the field, and they shall make thee to eate grasse as oxen, and they shall wet thee with the dew of heauen, and seuen times shall passe ouer thee, till thou know that the most high ruleth in the kingdome of men, and giueth it to whomsoeuer he will.

26 And whereas they commanded to leaue the stumpe of the tree rootes; thy kingdome shall be sure vnto thee, after that thou shalt haue knowen that the heauens doe rule.

27 Wherefore, O King, let my counsell be acceptable vnto thee, and breake off thy sinnes by righteousnesse, and thine iniquities by shewing mercy to the poore; if it may be a lengthening of thy tranquillitie.

28 ¶ All this came vpon the King Nebuchad-nezzar.

29 At the end of twelue moneths he walked in the palace of the kingdome of Babylon.

30 The King spake, and said, Is not this great Babylon, that I haue built for the house of the kingdome, by the might of my power, and for the honour of my maiestie?

31 While the word was in the Kings mouth, there fell a voice from heauen, saying, O King Nebuchad-nezzar, to thee it is spoken; The kingdome is departed from thee.

32 And they shall driue thee from men, and thy dwelling shall be with the beasts of the field; they shall make thee to eate grasse as oxen, and seuen times shall passe ouer thee, vntill thou know that the most high ruleth in the kingdome of men, and giueth it to whomsoeuer he will.

33 The same houre was the thing fulfilled vpon Nebuchad-nezzar, and he was driuen from men, and did eate grasse as oxen, and his body was wet with the dew of heauen, till his haires were growen like Egles feathers, and his nailes like birds clawes.

34 And at the end of the dayes, I Nebuchad-nezzar lift vp mine eyes vnto heauen, and mine vnderstanding returned vnto me, and I blessed the most high, and I praised, and honoured him that liueth for euer, whose dominion is an euerlasting dominion, and his kingdome is from generation to generation.

37 Now I Nebuchad-nezzar praise, and extoll and honour the King of heauen, all whose workes are truth, and his waies iudgement, and those that walke in pride he is able to abase.

Nebuchadnezzar acknowledges the power of Jehovah. (1-18) Daniel interprets his dream. (19-27) The fulfilment of it. (28-37)1-18 The beginning and end of this chapter lead us to hope, that Nebuchadnezzar was a monument of the power of Divine grace, and of the riches of Divine mercy. After he was recovered from his madness, he told to distant places, and wrote down for future ages, how God had justly humbled and graciously restored him. When a sinner comes to himself, he will promote the welfare of others, by making known the wondrous mercy of God. Nebuchadnezzar, before he related the Divine judgments upon him for his pride, told the warnings he had in a dream or vision. The meaning was explained to him. The person signified, was to be put down from honour, and to be deprived of the use of his reason seven years. This is surely the sorest of all temporal judgments. Whatever outward affliction God is pleased to lay upon us, we have cause to bear it patiently, and to be thankful that he continues the use of our reason, and the peace of our consciences. Yet if the Lord should see fit by such means to keep a sinner from multiplying crimes, or a believer from dishonouring his name, even the dreadful prevention would be far preferable to the evil conduct. God has determined it, as a righteous Judge, and the angels in heaven applaud. Not that the great God needs the counsel or concurrence of the angels, but it denotes the solemnity of this sentence. The demand is by the word of the holy ones, God's suffering people: when the oppressed cry to God, he will hear. Let us diligently seek blessings which can never be taken from us, and especially beware of pride and forgetfulness of God.

19-27 Daniel was struck with amazement and terror at so heavy a judgment coming upon so great a prince, and gives advice with tenderness and respect. It is necessary, in repentance, that we not only cease to do evil, but learn to do good. Though it might not wholly prevent the judgment, yet the trouble may be longer before it comes, or shorter when it does come. And everlasting misery will be escaped by all who repent and turn to God.

28-37 Pride and self-conceit are sins that beset great men. They are apt to take that glory to themselves which is due to God only. While the proud word was in the king's mouth, the powerful word came from God. His understanding and his memory were gone, and all the powers of the rational soul were broken. How careful we ought to be, not to do any thing which may provoke God to put us out of our senses! God resists the proud. Nebuchadnezzar would be more than a man, but God justly makes him less than a man. We may learn to believe concerning God, that the most high God lives for ever, and that his kingdom is like himself, everlasting, and universal. His power cannot be resisted. When men are brought to honour God, by confession of sin and acknowledging his sovereignty, then, and not till then, they may expect that God will honour them; not only restore them to the dignity they lost by the sin of the first Adam, but add excellent majesty to them, from the righteousness and grace of the Second Adam. Afflictions shall last no longer than till they have done the work for which they were sent. There can be no reasonable doubt that Nebuchadnezzar was a true penitent, and an accepted believer. It is thought that he did not live more than a year after his restoration. Thus the Lord knows how to abase those that walk in pride, but gives grace and consolation to the humble, broken-hearted sinner who calls upon Him.

View All Discussusion for Daniel Chapter 4... 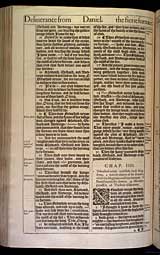