1 In the third yere of Cyrus King of Persia, a thing was reuealed vnto Daniel (whose name was called Belteshazzar) and the thing was true, but the time appointed was long, and he vnderstood the thing, and had vnderstanding of the vision.

2 In those dayes, I Daniel was mourning three full weekes.

3 I ate no pleasant bread, neither came flesh, nor wine in my mouth, neither did I anoynt my selfe at all, till three whole weekes were fulfilled.

4 And in the foure and twentieth day of the first moneth, as I was by the side of the great riuer, which is Hiddekel:

5 Then I lift vp mine eyes and looked, and behold, a certaine man clothed in linen, whose loynes were girded with fine gold of Uphaz.

6 His body also was like the Berill, and his face as the appearance of lightning, and his eyes as lampes of fire, and his armes, and his feete like in colour to polished brasse, and the voice of his words like the voice of a multitude.

7 And I Daniel alone saw the vision: for the men that were with mee saw not the vision: but a great quaking fell vpon them, so that they fled to hide themselues.

8 Therefore I was left alone, and saw this great vision, and there remained no strength in me: for my comelinesse was turned in me into corruption, and I retained no strength.

10 ¶ And behold, an hand touched me, which set me vpon my knees, and vpon the palmes of my hands.

11 And hee said vnto me, O Daniel, a man greatly beloued, vnderstand the wordes that I speake vnto thee, and stand vpright: for vnto thee am I now sent; and when he had spoken this word vnto me, I stood trembling.

12 Then sayd hee vnto me; Feare not, Daniel: for from the first day that thou diddest set thine heart to vnderstand, and to chasten thy selfe before thy God, thy wordes were heard, and I am come for thy words.

13 But the prince of the kingdome of Persia withstood mee one and twentie dayes: but loe, Michael one of the chiefe Princes came to helpe mee, and I remained there with the Kings of Persia.

14 Now I am come to make thee vnderstand what shall befall thy people, in the latter dayes: for yet the vision is for many dayes.

15 And when hee had spoken such words vnto me, I set my face toward the ground, and I became dumbe.

16 And behold, one like the similitude of the sonnes of men touched my lippes: then I opened my mouth, and spake, and sayd vnto him that stoode before me; O my Lord, by the vision my sorrowes are turned vpon me, and I haue retained no strength.

17 For how can the seruant of this my Lord, talke with this my Lord? for as for me, straightway there remained no strength in mee, neither is there breath left in me.

18 Then there came againe and touched me one like the appearance of a man, and he strengthned me,

19 And said; O man greatly beloued, feare not: peace be vnto thee, be strong, yea be strong; and when he had spoken vnto me, I was strengthened, and said; Let my Lord speake; for thou hast strengthened me.

20 Then said hee, Knowest thou wherefore I come vnto thee? and now will I returne to fight with the prince of Persia: and when I am gone forth, loe, the prince of Grecia shall come.

21 But I will shew thee that which is noted in the Scripture of trueth: and there is none that holdeth with me in these things, but Michael your prince.

Daniel's vision near the river Hiddekel. (1-9) He is to expect a discovery of future events. (10-21)1-9. This chapter relates the beginning of Daniel's last vision, which is continued to the end of the book. The time would be long before all would be accomplished; and much of it is not yet fulfilled. Christ appeared to Daniel in a glorious form, and it should engage us to think highly and honourably of him. Let us admire his condescension for us and our salvation. There remained no strength in Daniel. The greatest and best of men cannot bear the full discoveries of the Divine glory; for no man can see it, and live; but glorified saints see Christ as he is, and can bear the sight. How dreadful soever Christ may appear to those under convictions of sin, there is enough in his word to quiet their spirits.

10-21 Whenever we enter into communion with God, it becomes us to have a due sense of the infinite distance between us and the holy God. How shall we, that are dust and ashes, speak to the Lord of glory? Nothing is more likely, nothing more effectual to revive the drooping spirits of the saints, than to be assured of God's love to them. From the very first day we begin to look toward God in a way of duty, he is ready to meet us in the way of mercy. Thus ready is God to hear prayer. When the angel had told the prophet of the things to come, he was to return, and oppose the decrees of the Persian kings against the Jews. The angels are employed as God's ministering servants, #Heb 1:14|. Though much was done against the Jews by the kings of Persia, God permitting it, much more mischief would have been done if God had not prevented it. He would now more fully show what were God's purposes, of which the prophecies form an outline; and we are concerned to study what is written in these Scriptures of truth, for they belong to our everlasting peace. While Satan and his angels, and evil counsellors, excite princes to mischief against the church, we may rejoice that Christ our Prince, and all his mighty angels, act against our enemies; but we ought not to expect many to favour us in this evil world. Yet the whole counsel of God shall be established; and let each one pray, Lord Jesus, be our righteousness now, and thou wilt be our everlasting confidence, through life, in death, at the day of judgment, and for evermore.

View All Discussusion for Daniel Chapter 10... 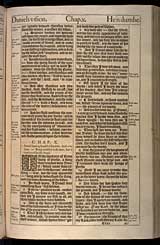