1 In the thirde yere of the reigne of Iehoiakim King of Iudah, came Nebuchad-nezzar King of Babylon, vnto Ierusalem, and besieged it.

3 ¶ And the king spake vnto Ashpenaz the master of his Eunuches, that he should bring certaine of the children of Israel, and of the kings seed, and of the Princes:

4 Children in whom was no blemish, but well fauoured, and skilfull in all wisedome, and cunning in knowledge, and vnderstanding science, and such as had abilitie in them to stand in the Kings palace, and whom they might teach the learning, and the tongue of the Caldeans.

5 And the King appointed them a daily prouision of the kings meat, and of the wine which he dranke: so nourishing them three yeeres, that at the ende thereof they might stand before the king.

6 Now among these were of the children of Iudah, Daniel, Hananiah, Mishael, and Azariah:

7 Unto whom the Prince of the Eunuches gaue names: for he gaue vnto Daniel the name of Belteshazzar; and to Hananiah, of Shadrach; and to Mishael, of Meshach; and to Azariah of Abednego.

9 Now God had brought Daniel into fauour and tender loue with the Prince of the Eunuches.

10 And the Prince of the Eunuches said vnto Daniel, I feare my lord the king, who hath appointed your meat, and your drinke: for why should he see your faces worse liking then the children which are of your sort? then shall yee make mee indanger my head to the King.

11 Then said Daniel to Melzar, whom the Prince of the Eunuches had set ouer Daniel, Hananiah, Mishael, and Azariah,

12 Proue thy seruants, I beseech thee, ten dayes, and let them giue pulse to eat, and water to drinke.

13 Then let our countenances be looked vpon before thee, and the countenance of the children that eat of the portion of the Kings meate: and as thou seest, deale with thy seruants.

14 So hee consented to them in this matter, and proued them ten dayes.

15 And at the end often dayes, their countenances appeared fairer, and fatter in flesh, then all the children, which did eate the portion of the kings meat.

16 Thus Melzar tooke away the portion of their meat, and the wine that they should drink: and gaue them pulse.

17 ¶ As for these foure children, God gaue them knowledge, and skil in all learning and wisedome, and Daniel had vnderstanding in all visions and dreames.

18 Now at the end of the dayes that the King had said he should bring them in, then the Prince of the Eunuches brought them in before Nebuchadnezzar.

19 And the King communed with them: and among them all was found none like Daniel, Hananiah, Mishael, and Azariah: therefore stood they before the King.

20 And in all matters of wisedome and vnderstanding that the king enquired of them, hee found them ten times better then all the Magicians and Astrologers that were in all his Realme.

Daniel was of noble birth, if not one of the royal family of Judah. He was carried captive to Babylon in the fourth year of Jehoiachin, B. C. 606, when a youth. He was there taught the learning of the Chaldeans, and held high offices, both under the Babylonian and Persian empires. He was persecuted for his religion, but was miraculously delivered; and lived to a great age, as he must have been about ninety-four years old at the time of the last of his visions. The book of Daniel is partly historical, relating various circumstances which befel himself and the Jews, at Babylon; but is chiefly prophetical, detailing visions and prophecies which foretell numerous important events relative to the four great empires of the world, the coming and death of the Messiah, the restoration of the Jews, and the conversion of the Gentiles. Though there are considerable difficulties in explaining the prophetical meaning of some passages in this book, we always find encouragement to faith and hope, examples worthy of imitation, and something to direct our thoughts to Christ Jesus upon the cross and on his glorious throne.The captivity of Daniel and his companions. (1-7) Their refusal to eat the king's meat. (8-16) Their improvement in wisdom. (17-21)1-7 Nebuchadnezzar, king of Babylon, in the first year of his reign, took Jerusalem, and carried whom and what he pleased away. From this first captivity, most think the seventy years are to be dated. It is the interest of princes to employ wise men; and it is their wisdom to find out and train up such. Nebuchadnezzar ordered that these chosen youths should be taught. All their Hebrew names had something of God in them; but to make them forget the God of their fathers, the Guide of their youth, the heathen gave them names that savoured of idolatry. It is painful to reflect how often public education tends to corrupt the principles and morals.

8-16 The interest we think we make for ourselves, we must acknowledge to be God's gift. Daniel was still firm to his religion. Whatever they called him, he still held fast the spirit of an Israelite. These youths scrupled concerning the meat, lest it should be sinful. When God's people are in Babylon they need take special care that they partake not of her sins. It is much to the praise of young people, not to covet or seek the delights of sense. Those who would excel in wisdom and piety, must learn betimes to keep the body under. Daniel avoided defiling himself with sin; and we should more fear that than any outward trouble. It is easier to keep temptation at a distance, than to resist it when near. And we cannot better improve our interest in any with whom we have found favour, than to use it to keep us from sin. People will not believe the benefit of avoiding excess, and of a spare diet, nor how much they contribute to the health of the body, unless they try. Conscientious temperance will always do more, even for the comfort of this life, than sinful indulgence.

17-21 Daniel and his fellows kept to their religion; and God rewarded them with eminence in learning. Pious young persons should endeavour to do better than their fellows in useful things; not for the praise of man, but for the honour of the gospel, and that they may be qualified for usefulness. And it is well for a country, and for the honour of a prince, when he is able to judge who are best fitted to serve him, and prefers them on that account. Let young men steadily attend to this chapter; and let all remember that God will honour those who honour him, but those who despise him shall be lightly esteemed.

View All Discussusion for Daniel Chapter 1... 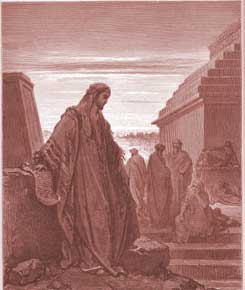 Daniel among the Exiles 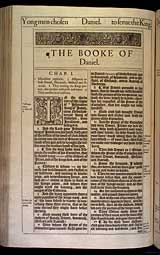