1 For I would that ye knew what great conflict I haue for you, and for them at Laodicea, and for as many as haue not seene my face in the flesh:

2 That their hearts might be comforted, being knit together in loue, and vnto all riches of the full assurance of vnderstanding, to the acknowledgement of the mysterie of God, and of the Father, and of Christ,

3 In whom are hid all the treasures of wisedome, and knowledge.

4 And this I say, lest any man should beguile you with entising words.

5 For though I bee absent in the flesh, yet am I with you in the spirit, ioying and beholding your order, and the stedfastnesse of your faith in Christ.

6 As yee haue therefore receiued Christ Iesus the Lord, so walke yee in him:

7 Rooted and built vp in him, and stablished in the faith, as yee haue bene taught, abounding therein with thankesgiuing.

8 Beware lest any man spoile you through Philosophie and vaine deceit, after the tradition of men, after the rudiments of the world, and not after Christ:

9 For in him dwelleth all the fulnesse of the Godhead bodily.

10 And ye are complete in him, which is the head of all principalitie, & power.

12 Buried with him in Baptisme, wherein also you are risen with him through the faith of the operation of God, who hath raised him from the dead.

13 And you being dead in your sinnes, and the vncircumcision of your flesh, hath hee quickened together with him, hauing forgiuen you all trespasses,

14 Blotting out the handwriting of ordinances, that was against vs, which was contrary to vs, and tooke it out of the way, nayling it to his Crosse:

15 And hauing spoyled principalities and powers, he made a shew of them openly, triumphing ouer them in it.

16 Let no man therefore iudge you in meat, or in drinke, or in respect of an Holy day, or of the New moone, or of the Sabbath dayes:

17 Which are a shadow of things to come, but the body is of Christ.

18 Let no man beguile you of your reward, in a voluntary humilitie, and worshipping of Angels, intruding into those things which hee hath not seene, vainely puft vp by his fleshly minde:

19 And not holding the head, from which all the body by ioynts and bands hauing nourishment ministred, and knit together, increaseth with the increase of God.

20 Wherefore if yee bee dead with Christ frō the rudiments of the world: why, as though liuing in the world, are ye subiect to ordinances?

22 Which all are to perish with the vsing) after the commandements and doctrines of men:

23 Which things haue in deed a shew of wisedome in will-worship and humilitie, and neglecting of the body, not in any honour to the satisfying of the flesh.

The apostle expresses his love to, and joy in believers. (1-7) He cautions against the errors of heathen philosophy; also against Jewish traditions, and rites which had been fulfilled in Christ. (8-17) Against worshipping angels; and against legal ordinances. (18-23)1-7 The soul prospers when we have clear knowledge of the truth as it is in Jesus. When we not only believe with the heart, but are ready, when called, to make confession with the mouth. Knowledge and faith make a soul rich. The stronger our faith, and the warmer our love, the more will our comfort be. The treasures of wisdom are hid, not from us, but for us, in Christ. These were hid from proud unbelievers, but displayed in the person and redemption of Christ. See the danger of enticing words; how many are ruined by the false disguises and fair appearances of evil principles and wicked practices! Be aware and afraid of those who would entice to any evil; for they aim to spoil you. All Christians have, in profession at least, received Jesus Christ the Lord, consented to him, and taken him for theirs. We cannot be built up in Christ, or grow in him, unless we are first rooted in him, or founded upon him. Being established in the faith, we must abound therein, and improve in it more and more. God justly withdraws this benefit from those who do not receive it with thanksgiving; and gratitude for his mercies is justly required by God.

8-17 There is a philosophy which rightly exercises our reasonable faculties; a study of the works of God, which leads us to the knowledge of God, and confirms our faith in him. But there is a philosophy which is vain and deceitful; and while it pleases men's fancies, hinders their faith: such are curious speculations about things above us, or no concern to us. Those who walk in the way of the world, are turned from following Christ. We have in Him the substance of all the shadows of the ceremonial law. All the defects of it are made up in the gospel of Christ, by his complete sacrifice for sin, and by the revelation of the will of God. To be complete, is to be furnished with all things necessary for salvation. By this one word "complete," is shown that we have in Christ whatever is required. "In him," not when we look to Christ, as though he were distant from us, but we are in him, when, by the power of the Spirit, we have faith wrought in our hearts by the Spirit, and we are united to our Head. The circumcision of the heart, the crucifixion of the flesh, the death and burial to sin and to the world, and the resurrection to newness of life, set forth in baptism, and by faith wrought in our hearts, prove that our sins are forgiven, and that we are fully delivered from the curse of the law. Through Christ, we, who were dead in sins, are quickened. Christ's death was the death of our sins; Christ's resurrection is the quickening of our souls. The law of ordinances, which was a yoke to the Jews, and a partition-wall to the Gentiles, the Lord Jesus took out of the way. When the substance was come, the shadows fled. Since every mortal man is, through the hand-writing of the law, guilty of death, how very dreadful is the condition of the ungodly and unholy, who trample under foot that blood of the Son of God, whereby alone this deadly hand-writing can be blotted out! Let not any be troubled about bigoted judgments which related to meats, or the Jewish solemnities. The setting apart a portion of our time for the worship and service of God, is a moral and unchangeable duty, but had no necessary dependence upon the seventh day of the week, the sabbath of the Jews. The first day of the week, or the Lord's day, is the time kept holy by Christians, in remembrance of Christ's resurrection. All the Jewish rites were shadows of gospel blessings.

18-23 It looked like humility to apply to angels, as if men were conscious of their unworthiness to speak directly to God. But it is not warrantable; it is taking that honour which is due to Christ only, and giving it to a creature. There really was pride in this seeming humility. Those who worship angels, disclaim Christ, who is the only Mediator between God and man. It is an insult to Christ, who is the Head of the church, to use any intercessors but him. When men let go their hold of Christ, they catch at what will stand them in no stead. The body of Christ is a growing body. And true believers cannot live in the fashions of the world. True wisdom is, to keep close to the appointments of the gospel; in entire subjection to Christ, who is the only Head of his church. Self-imposed sufferings and fastings, might have a show of uncommon spirituality and willingness for suffering, but this was not "in any honour" to God. The whole tended, in a wrong manner, to satisfy the carnal mind, by gratifying self-will, self-wisdom, self-righteousness, and contempt of others. The things being such as carry not with them so much as the show of wisdom; or so faint a show that they do the soul no good, and provide not for the satisfying of the flesh. What the Lord has left indifferent, let us regard as such, and leave others to the like freedom; and remembering the passing nature of earthly things, let us seek to glorify God in the use of them.

View All Discussusion for Colossians Chapter 2... 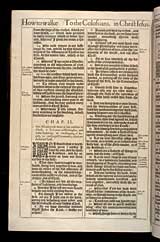