Why is Additions to Esther shown with the King James Bible?

5 For I remember a dreame, which I sawe concerning these matters, and nothing thereof hath failed.

6 A little fountaine became a riuer, and there was light, & the Sunne, and much water: this riuer is Esther, whō the King married and made Queene.

7 And the two Dragons are I, and Aman.

8 And the nations were those that were assembled, to destroy the name of the Iewes.

9 And my nation is this Israel, which cryed to God and were saued: for the Lord hath saued his people, and the Lord hath deliuered vs from all those euils, and God hath wrought signes, and great wonders, which haue not bin done among the Gentiles.

10 Therefore hath hee made two lots, one for the people of God, and another for all the Gentiles.

11 And these two lots came at the houre, and time, and day of iudgement before God amongst all nations.

12 So God remembred his people, and iustified his inheritance.

13 Therefore those dayes shall be vnto them in the moneth Adar, the foureteenth and fifteenth day of the same moneth, with an assembly, and ioy, and with gladnesse, before God, according to the generations for euer among his people.

View All Discussusion for Additions to Esther Chapter 10... 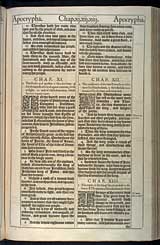