1 And in those dayes when the number of the Disciples was multiplied, there arose a murmuring of the Grecians against the Hebrewes, because their widowes were neglected in the daily ministration.

2 Then the twelue called the multitude of the disciples vnto them, and said, It is not reason that we should leaue the word of God, and serue tables.

3 Wherefore brethren, looke ye out among you seuen men of honest report, full of the holy Ghost, and wisedome, whom we may appoint ouer this businesse.

4 But we will giue our selues continually to prayer, and to the ministerie of the word.

5 ¶ And the saying pleased the whole multitude: and they chose Steuen, a man full of faith and of the holy Ghost, and Philip, and Prochorus, and Nicanor, and Timon, and Permenas, and Nicolas a proselyte of Antioch.

6 Whom they set before the Apostles: and when they had praied, they layd their hands on them.

7 And the word of God encreased, and the number of the Disciples multiplied in Hierusalem greatly, and a great company of the Priests were obedient to the faith.

8 And Steuen full of faith and power, did great wonders and miracles among the people.

9 ¶ Then there arose certaine of the Synagogue, which is called the Synagogue of the Libertines, and Cyrenians, and Alexandrians, and of them of Cilicia, and of Asia, disputing with Steuen.

10 And they were not able to resist the wisedome and the spirit by which he spake.

11 Then they suborned men which said, We haue heard him speake blasphemous words against Moses, and against God.

12 And they stirred vp the people, and the Elders, and the Scribes, and came vpon him, and caught him, and brought him to the Councell,

13 And set vp false witnesses, which said, This man ceaseth not to speake blasphemous words against this holy place, and the Law.

14 For we haue heard him say, that this Iesus of Nazareth shall destroy this place, & shall change the Customes which Moses deliuered vs.

15 And all that sate in the Councell, looking stedfastly on him, saw his face as it had bene the face of an Angel.

The appointment of deacons. (1-7) Stephen falsely accused of blasphemy. (8-15)1-7 Hitherto the disciples had been of one accord; this often had been noticed to their honour; but now they were multiplied, they began to murmur. The word of God was enough to take up all the thoughts, cares, and time of the apostles. The persons chosen to serve tables must be duly qualified. They must be filled with gifts and graces of the Holy Ghost, necessary to rightly managing this trust; men of truth, and hating covetousness. All who are employed in the service of the church, ought to be commended to the Divine grace by the prayers of the church. They blessed them in the name of the Lord. The word and grace of God are greatly magnified, when those are wrought upon by it, who were least likely.

8-15 When they could not answer Stephen's arguments as a disputant, they prosecuted him as a criminal, and brought false witnesses against him. And it is next to a miracle of providence, that no greater number of religious persons have been murdered in the world, by the way of perjury and pretence of law, when so many thousands hate them, who make no conscience of false oaths. Wisdom and holiness make a man's face to shine, yet will not secure men from being treated badly. What shall we say of man, a rational being, yet attempting to uphold a religious system by false witness and murder! And this has been done in numberless instances. But the blame rests not so much upon the understanding, as upon the heart of a fallen creature, which is deceitful above all things and desperately wicked. Yet the servant of the Lord, possessing a clear conscience, cheerful hope, and Divine consolations, may smile in the midst of danger and death.

View All Discussusion for Acts Chapter 6... 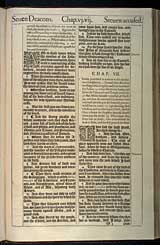