1 And as they spake vnto the people, the Priests and the captaine of the Temple, and the Sadduces came vpon them,

2 Being grieued that they taught the people, and preached through Iesus the resurrection from the dead.

3 And they laid hands on them, and put them in hold vnto the next day: for it was now euentide.

4 Howbeit, many of them which heard the word, beleeued, and the number of the men was about fiue thousand.

5 ¶ And it came to passe on the morow, that their rulers, and Elders, and Scribes,

7 And when they had set them in the middest, they asked, By what power, or by what name haue ye done this?

8 Then Peter filled with the holy Ghost, said vnto them, Ye rulers of the people, and Elders of Israel,

9 If we this day be examined of the good deed done to the impotent man, by what meanes he is made whole,

10 Be it knowen vnto you all, and to all the people of Israel, that by the Name of Iesus Christ of Nazareth, whom ye crucified, whome God raised from the dead, euen by him, doeth this man stand here before you, whole.

11 This is the stone which was set at nought of you builders, which is become the head of the corner.

12 Neither is there saluation in any other: for there is none other name vnder heauen giuen among men whereby we must be saued.

13 ¶ Now when they sawe the boldnesse of Peter and Iohn, and perceiued that they were vnlearned and ignorant men, they marueiled, and they tooke knowledge of them, that they had bene with Iesus.

14 And beholding the man which was healed, standing with them, they could say nothing against it.

15 But when they had commanded them to go aside out of the Council, they conferred among themselues,

16 Saying, What shall we do to these men? for that indeed a notable miracle hath bene done by them, is manifest to all them that dwell in Hierusalem, and we cannot denie it.

17 But that it spread no farther among the people, let vs straitly threaten them, that they speake henceforth to no man in this Name.

18 And they called them, and commanded them, not to speake at all, nor teach in the Name of Iesus.

19 But Peter and Iohn answered, and said vnto them, Whether it be right in the sight of God, to hearken vnto you more then vnto God, iudge ye.

20 For wee cannot but speake the things which we haue seene and heard.

21 So when they had further threatned them, they let them goe, finding nothing how they might punish them, because of the people: for all men glorified God for that which was done.

22 For the man was aboue fourtie yeeres olde, on whome this miracle of healing was shewed.

23 ¶ And being let goe, they went to their owne company, and reported all that the chiefe Priests and Elders had said vnto them.

24 And when they heard that, they lift vp their voyce to God with one accord, & said, Lord, thou art God which hast made heauen and earth, and the sea, and all that in them is,

25 Who by the mouth of thy seruant Dauid hast saide, Why did the heathen rage, and the people imagine vaine things?

26 The Kings of the earth stood vp, and the rulers were gathered together against the Lord, & against his Christ.

27 For of a trueth against thy holy child Iesus, whom thou hast anointed, both Herod, and Pontius Pilate, with the Gentiles, and the people of Israel were gathered together,

28 For to doe whatsoeuer thy hand and thy counsell determined before to be done.

29 And now Lord, behold their threatnings, and graunt vnto thy seruants, that with all boldnesse they may speake thy word,

30 By stretching foorth thine hand to heale: and that signes and wonders may be done by the Name of thy holy child Iesus.

31 ¶ And when they had prayed, the place was shaken where they were assembled together, and they were all filled with the holy Ghost, and they spake the word of God with boldnesse.

32 And the multitude of them that beleeued, were of one heart, and of one soule: Neither said any of them, that ought of the things which he possessed, was his owne, but they had all things common.

33 And with great power gaue the Apostles witnesse of the resurrection of the Lord Iesus, and great grace was vpon them all.

34 Neither was there any among them that lacked: For as many as were possessors of lands, or houses, sold them, and brought the prices of the things that were solde,

35 And laide them downe at the Apostles feete: And distribution was made vnto euery man according as hee had neede.

36 And Ioses, who by the Apostles was surnamed Barnabas (which is, being interpreted, The sonne of consolation) a Leuite, and of the Countrey of Cyprus,

37 Hauing land, sold it, and brought the money, & laid it at the Apostles feet.

Peter and John imprisoned. (1-4) The apostles boldly testify to Christ. (5-14) Peter and John refuse to be silenced. (15-22) The believers unite in prayer and praise. (23-31) The holy charity of the Christians. (32-37)1-4 The apostles preached through Jesus the resurrection from the dead. It includes all the happiness of the future state; this they preached through Jesus Christ, to be had through him only. Miserable is their case, to whom the glory of Christ's kingdom is a grief; for since the glory of that kingdom is everlasting, their grief will be everlasting also. The harmless and useful servants of Christ, like the apostles, have often been troubled for their work of faith and labour of love, when wicked men have escaped. And to this day instances are not wanting, in which reading the Scriptures, social prayer, and religious conversation meet with frowns and checks. But if we obey the precepts of Christ, he will support us.

5-14 Peter being filled with the Holy Ghost, would have all to understand, that the miracle had been wrought by the name, or power, of Jesus of Nazareth, the Messiah, whom they had crucified; and this confirmed their testimony to his resurrection from the dead, which proved him to be the Messiah. These rulers must either be saved by that Jesus whom they had crucified, or they must perish for ever. The name of Jesus is given to men of every age and nation, as that whereby alone believers are saved from the wrath to come. But when covetousness, pride, or any corrupt passion, rules within, men shut their eyes, and close their hearts, in enmity against the light; considering all as ignorant and unlearned, who desire to know nothing in comparison with Christ crucified. And the followers of Christ should act so that all who converse with them, may take knowledge that they have been with Jesus. That makes them holy, heavenly, spiritual, and cheerful, and raises them above this world.

15-22 All the care of the rulers is, that the doctrine of Christ spread not among the people, yet they cannot say it is false or dangerous, or of any ill tendency; and they are ashamed to own the true reason; that it testifies against their hypocrisy, wickedness, and tyranny. Those who know how to put a just value upon Christ's promises, know how to put just contempt upon the world's threatenings. The apostles look with concern on perishing souls, and know they cannot escape eternal ruin but by Jesus Christ, therefore they are faithful in warning, and showing the right way. None will enjoy peace of mind, nor act uprightly, till they have learned to guide their conduct by the fixed standard of truth, and not by the shifting opinions and fancies of men. Especially beware of a vain attempt to serve two masters, God and the world; the end will be, you can serve neither fully.

23-31 Christ's followers do best in company, provided it is their own company. It encourages God's servants, both in doing work, and suffering work, that they serve the God who made all things, and therefore has the disposal of all events; and the Scriptures must be fulfilled. Jesus was anointed to be a Saviour, therefore it was determined he should be a sacrifice, to make atonement for sin. But sin is not the less evil for God's bringing good out of it. In threatening times, our care should not be so much that troubles may be prevented, as that we may go on with cheerfulness and courage in our work and duty. They do not pray, Lord let us go away from our work, now that it is become dangerous, but, Lord, give us thy grace to go on stedfastly in our work, and not to fear the face of man. Those who desire Divine aid and encouragement, may depend upon having them, and they ought to go forth, and go on, in the strength of the Lord God. God gave a sign of acceptance of their prayers. The place was shaken, that their faith might be established and unshaken. God gave them greater degrees of his Spirit; and they were all filled with the Holy Ghost, more than ever; by which they were not only encouraged, but enabled to speak the word of God with boldness. When they find the Lord God help them by his Spirit, they know they shall not be confounded, #Isa 1.7|.

32-37 The disciples loved one another. This was the blessed fruit of Christ's dying precept to his disciples, and his dying prayer for them. Thus it was then, and it will be so again, when the Spirit shall be poured upon us from on high. The doctrine preached was the resurrection of Christ; a matter of fact, which being duly explained, was a summary of all the duties, privileges, and comforts of Christians. There were evident fruits of Christ's grace in all they said and did. They were dead to this world. This was a great evidence of the grace of God in them. They did not take away others' property, but they were indifferent to it. They did not call it their own; because they had, in affection, forsaken all for Christ, and were expecting to be stripped of all for cleaving to him. No marvel that they were of one heart and soul, when they sat so loose to the wealth of this world. In effect, they had all things common; for there was not any among them who lacked, care was taken for their supply. The money was laid at the apostles' feet. Great care ought to be taken in the distribution of public charity, that it be given to such as have need, such as are not able to procure a maintenance for themselves; those who are reduced to want for well-doing, and for the testimony of a good conscience, ought to be provided for. Here is one in particular mentioned, remarkable for this generous charity; it was Barnabas. As one designed to be a preacher of the gospel, he disentangled himself from the affairs of this life. When such dispositions prevail, and are exercised according to the circumstances of the times, the testimony will have very great power upon others.

View All Discussusion for Acts Chapter 4... 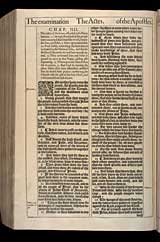