1 Nowe Peter and Iohn went vp together into the Temple at the houre of prayer, beeing the ninth houre.

2 And a certaine man lame from his mothers womb was caried, whom they laide daily at the gate of the Temple which is called Beautifull, to aske almes of them that entred into the Temple.

3 Who seeing Peter & Iohn about to go into the Temple, asked an almes.

4 And Peter fastening his eyes vpon him, with Iohn, said, Looke on vs.

5 And he gaue heede vnto them, expecting to receiue something of them.

6 Then Peter said, Siluer and gold haue I none, but such as I haue, giue I thee: In the Name of Iesus Christ of Nazareth, rise vp and walke.

7 And hee tooke him by the right hand, & lift him vp: aud immediatly his feete and ancle bones receiued strength.

8 And hee leaping vp, stood, and walked, and entred with them into the Temple, walking, and leaping, and praising God.

9 And all the people saw him walking, and praising God.

10 And they knew that it was hee which sate for almes at the beautifull gate of the Temple: and they were filled with wonder and amazement at that which had happened vnto him.

11 And as the lame man which was healed, helde Peter and Iohn, all the people ranne together vnto them in the porch, that is called Solomons, greatly wondring.

12 ¶ And when Peter sawe it, hee answered vnto the people, Yee men of Israel, why marueile ye at this? or why looke yee so earnestly on vs, as though by our owne power or holinesse we had made this man to walke?

13 The God of Abraham, and of Isaac, and of Iacob, the God of our fathers hath glorified his sonne Iesus, whom ye deliuered vp, and denied him in the presence of Pilate, when hee was determined to let him goe.

14 But ye denied the Holy one, and the Iust, and desired a murderer to be granted vnto you,

15 And killed the Prince of life, whom God hath raised from the dead, whereof we are witnesses.

16 And his Name through faith in his Name hath made this man strong, whom ye see and know: yea, the faith which is by him, hath giuen him this perfect soundnesse in the presence of you all.

17 And now brethren, I wote that through ignorance yee did it, as did also your rulers.

18 But those things which God before had shewed by the mouth of all his Prophets, that Christ should suffer, hee hath so fulfilled.

19 ¶ Repent yee therefore, and bee conuerted, that your sins may be blotted out, when the times of refreshing shal come from the presence of the Lord.

20 And hee shall send Iesus Christ, which before was preached vnto you.

21 Whom the heauen must receiue, vntill the times of restitution of all things, which God hath spoken by the mouth of all his holy Prophets since the world began.

22 For Moses truely said vnto the fathers, A Prophet shall the Lord your God raise vp vnto you of your brethren, like vnto me; him shall yee heare in all things whatsoeuer he shal say vnto you.

23 And it shall come to passe, that euery soule which will not heare that Prophet, shalbe destroyed from among the people.

24 Yea and all the Prophets from Samuel, and those that follow after, as many as haue spoken, haue likewise foretold of these dayes.

25 Yee are the children of the Prophets, and of the couenant which God made with our fathers, saying vnto Abraham, And in thy seed shall all the kinreds of the earth be blessed.

26 Unto you first, God hauing raised vp his Sonne Iesus, sent him to blesse you, in turning away euery one of you from his iniquities.

A lame man healed by Peter and John. (1-11) Peter's address to the Jews. (12-26)1-11 The apostles and the first believers attended the temple worship at the hours of prayer. Peter and John seem to have been led by a Divine direction, to work a miracle on a man above forty years old, who had been a cripple from his birth. Peter, in the name of Jesus of Nazareth, bade him rise up and walk. Thus, if we would attempt to good purpose the healing of men's souls, we must go forth in the name and power of Jesus Christ, calling on helpless sinners to arise and walk in the way of holiness, by faith in Him. How sweet the thought to our souls, that in respect to all the crippled faculties of our fallen nature, the name of Jesus Christ of Nazareth can make us whole! With what holy joy and rapture shall we tread the holy courts, when God the Spirit causes us to enter therein by his strength!

12-18 Observe the difference in the manner of working the miracles. Our Lord always spoke as having Almighty power, never hesitated to receive the greatest honour that was given to him on account of his Divine miracles. But the apostles referred all to their Lord, and refused to receive any honour, except as his undeserving instruments. This shows that Jesus was one with the Father, and co-equal with Him; while the apostles knew that they were weak, sinful men, and dependent for every thing on Jesus, whose power effected the cure. Useful men must be very humble. Not unto us, O Lord, not unto us, but to thy name, give glory. Every crown must be cast at the feet of Christ. The apostle showed the Jews the greatness of their crime, but would not anger or drive them to despair. Assuredly, those who reject, refuse, or deny Christ, do it through ignorance; but this can in no case be an excuse.

19-21 The absolute necessity of repentance is to be solemnly charged upon the consciences of all who desire that their sins may be blotted out, and that they may share in the refreshment which nothing but a sense of Christ's pardoning love can afford. Blessed are those who have felt this. It was not needful for the Holy Spirit to make known the times and seasons of these dispensations. These subjects are still left obscure. But when sinners are convinced of their sins, they will cry to the Lord for pardon; and to the penitent, converted, and believing, times of refreshment will come from the presence of the Lord. In a state of trial and probation, the glorified Redeemer will be out of sight, because we must live by faith in him.

22-26 Here is a powerful address to warn the Jews of the dreadful consequences of their unbelief, in the very words of Moses, their favourite prophet, out of pretended zeal for whom they were ready to reject Christianity, and to try to destroy it. Christ came into the world to bring a blessing with him. And he sent his Spirit to be the great blessing. Christ came to bless us, by turning us from our iniquities, and saving us from our sins. We, by nature cleave to sin; the design of Divine grace is to turn us from it, that we may not only forsake, but hate it. Let none think that they can be happy by continuing in sin, when God declares that the blessing is in being turned from all iniquity. Let none think that they understand or believe the gospel, who only seek deliverance from the punishment of sin, but do not expect happiness in being delivered from sin itself. And let none expect to be turned from their sin, except by believing in, and receiving Christ the Son of God, as their wisdom, righteousness, sanctification, and redemption.

View All Discussusion for Acts Chapter 3... 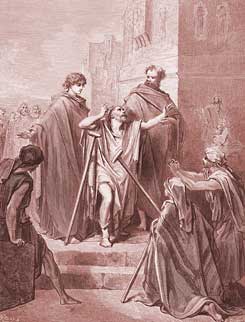 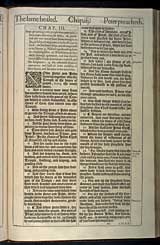