1 Now when they had passed thorow Amphipolis, and Apollonia, they came to Thessalonica, where was a synagogue of the Iewes.

2 And Paul, as his maner was, went in vnto them, and three Sabbath dayes reasoned with them out of the Scriptures,

3 Opening and alleadging, that Christ must needs haue suffered and risen againe from the dead: and that this Iesus whom I preach vnto you, is Christ.

4 And some of them beleeued, and consorted with Paul and Silas: and of the deuout Greekes a great multitude, and of the chiefe women not a few.

5 ¶ But the Iewes which beleeued not, mooued with enuie, tooke vnto them certaine lewd fellowes of the baser sort, and gathered a company, and set all the citie on an vprore, and assaulted the house of Iason, and sought to bring them out to the people.

6 And when they found them not, they drew Iason, and certaine brethren vnto the rulers of the citie, crying, These that haue turned the world vpside downe, are come hither also,

7 Whom Iason hath receiued: and these all doe contrary to the decrees of Cesar, saying, that there is another King, one Iesus.

8 And they troubled the people, and the rulers of the citie, when they heard these things.

9 And when they had taken securitie of Iason, and of the other, they let them goe.

10 ¶ And the brethren immediatly sent away Paul and Silas by night vnto Berea: who comming thither, went into the Synagogue of the Iewes.

11 These were more noble then those in Thessalonica, in that they receiued the word with all readinesse of minde, and searched the Scriptures dayly, whether those things were so.

12 Therefore many of them beleeued: also of honourable women which were Greekes, and of men not a few.

13 But when the Iewes of Thessalonica had knowledge that the word of God was preached of Paul at Berea, they came thither also, and stirred vp the people.

14 And then immediatly the brethren sent away Paul, to goe as it were to the sea: but Silas and Timotheus abode there still.

15 And they that conducted Paul, brought him vnto Athens, and receiuing a commaundement vnto Silas and Timotheus, for to come to him with all speed, they departed.

16 ¶ Now while Paul waited for them at Athens, his spirit was stirred in him, when hee saw the city wholy giuen to idolatrie.

17 Therefore disputed he in the Synagogue with the Iewes, and with the deuout persons, and in the market dayly with them that met with him.

18 Then certaine Philosophers of the Epicureans, and of the Stoikes, encountred him: and some said, What will this babbler say? Othersome, He seemeth to be a setter foorth of strange gods: because hee preached vnto them Iesus, and the resurrection.

19 And they tooke him, and brought him vnto Areopagus, saying, May we know what this new doctrine, whereof thou speakest, is?

20 For thou bringest certaine strange things to our eares: we would know therefore what these things meane.

21 (For all the Athenians and strangers which were there, spent their time in nothing else, but either to tell or to heare some new thing.)

22 ¶ Then Paul stood in the mids of Mars-hill, and said, Yee men of Athens, I perceiue that in all things yee are too superstitious.

23 For as I passed by, and beheld your deuotions, I found an Altar with this inscription, TO THE VNKNOWEN GOD. Whom therefore yee ignorantly worship, him declare I vnto you.

24 God that made the world, and all things therein, seeing that hee is Lord of heauen and earth, dwelleth not in Temples made with hands:

25 Neither is worshipped with mens hands as though he needed any thing, seeing hee giueth to all, life and breath, and all things,

26 And hath made of one blood all nations of men, for to dwell on all the face of the earth, and hath determined the times before appointed, and the bounds of their habitation:

27 That they should seeke the Lord, if haply they might feele after him and finde him, though he be not farre from euery one of vs.

28 For in him we liue, and mooue, and haue our being, as certaine also of your owne Poets haue said, For we are also his offspring.

29 Forasmuch then as wee are the offspring of God, wee ought not to thinke that the Godhead is like vnto golde, or siluer, or stone grauen by arte, and mans deuice.

30 And the times of this ignorance God winked at, but now commandeth all men euery where to repent:

31 Because hee hath appointed a day in the which he will iudge the world in righteousnesse, by that man whom hee hath ordeined, whereof he hath giuen assurance vnto all men, in that he hath raised him from the dead.

32 ¶ And when they heard of the resurrection of the dead, some mocked: and others said, Wee will heare thee againe of this matter.

33 So Paul departed from among them.

34 Howbeit, certaine men claue vnto him, and beleeued: among the which was Dionysius the Areopagite, and a woman named Damaris, and others with them.

Paul at Thessalonica. (1-9) The noble conduct of the Bereans. (10-15) Paul at Athens. (16-21) He preaches there. (22-31) The scornful conduct of the Athenians. (32-34)1-9 The drift and scope of Paul's preaching and arguing, was to prove that Jesus is the Christ. He must needs suffer for us, because he could not otherwise purchase our redemption for us; and he must needs have risen again, because he could not otherwise apply the redemption to us. We are to preach concerning Jesus that he is Christ; therefore we may hope to be saved by him, and are bound to be ruled by him. The unbelieving Jews were angry, because the apostles preached to the Gentiles, that they might be saved. How strange it is, that men should grudge others the privileges they will not themselves accept! Neither rulers nor people need be troubled at the increase of real Christians, even though turbulent spirits should make religion the pretext for evil designs. Of such let us beware, from such let us withdraw, that we may show a desire to act aright in society, while we claim our right to worship God according to our consciences.

10-15 The Jews in Berea applied seriously to the study of the word preached unto them. They not only heard Paul preach on the sabbath, but daily searched the Scriptures, and compared what they read with the facts related to them. The doctrine of Christ does not fear inquiry; advocates for his cause desire no more than that people will fully and fairly examine whether things are so or not. Those are truly noble, and likely to be more and more so, who make the Scriptures their rule, and consult them accordingly. May all the hearers of the gospel become like those of Berea, receiving the word with readiness of mind, and searching the Scriptures daily, whether the things preached to them are so.

16-21 Athens was then famed for polite learning, philosophy, and the fine arts; but none are more childish and superstitious, more impious, or more credulous, than some persons, deemed eminent for learning and ability. It was wholly given to idolatry. The zealous advocate for the cause of Christ will be ready to plead for it in all companies, as occasion offers. Most of these learned men took no notice of Paul; but some, whose principles were the most directly contrary to Christianity, made remarks upon him. The apostle ever dwelt upon two points, which are indeed the principal doctrines of Christianity, Christ and a future state; Christ our way, and heaven our end. They looked on this as very different from the knowledge for many ages taught and professed at Athens; they desire to know more of it, but only because it was new and strange. They led him to the place where judges sat who inquired into such matters. They asked about Paul's doctrine, not because it was good, but because it was new. Great talkers are always busy-bodies. They spend their time in nothing else, and a very uncomfortable account they have to give of their time who thus spend it. Time is precious, and we are concerned to employ it well, because eternity depends upon it, but much is wasted in unprofitable conversation.

22-31 Here we have a sermon to heathens, who worshipped false gods, and were without the true God in the world; and to them the scope of the discourse was different from what the apostle preached to the Jews. In the latter case, his business was to lead his hearers by prophecies and miracles to the knowledge of the Redeemer, and faith in him; in the former, it was to lead them, by the common works of providence, to know the Creator, and worship Him. The apostle spoke of an altar he had seen, with the inscription, "TO THE UNKNOWN GOD." This fact is stated by many writers. After multiplying their idols to the utmost, some at Athens thought there was another god of whom they had no knowledge. And are there not many now called Christians, who are zealous in their devotions, yet the great object of their worship is to them an unknown God? Observe what glorious things Paul here says of that God whom he served, and would have them to serve. The Lord had long borne with idolatry, but the times of this ignorance were now ending, and by his servants he now commanded all men every where to repent of their idolatry. Each sect of the learned men would feel themselves powerfully affected by the apostle's discourse, which tended to show the emptiness or falsity of their doctrines.

32-34 The apostle was treated with more outward civility at Athens than in some other places; but none more despised his doctrine, or treated it with more indifference. Of all subjects, that which deserves the most attention gains the least. But those who scorn, will have to bear the consequences, and the word will never be useless. Some will be found, who cleave to the Lord, and listen to his faithful servants. Considering the judgement to come, and Christ as our Judge, should urge all to repent of sin, and turn to Him. Whatever matter is used, all discourses must lead to Him, and show his authority; our salvation, and resurrection, come from and by Him.

View All Discussusion for Acts Chapter 17... 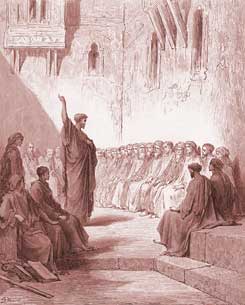 Paul Preaches to the Thessalonians 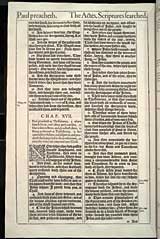