1 Then came he to Derbe, and Lystra: and behold, a certaine disciple was there, named Timotheus, the son of a certaine woman which was a Iewesse, and beleeued: but his father was a Greeke:

2 Which was well reported of by the brethren that were at Lystra and Iconium.

3 Him would Paul haue to go forth with him, and tooke, and circumcised him, because of the Iewes which were in those quarters: for they knew all, that his father was a Greeke.

4 And as they went through the cities, they deliuered them the decrees for to keepe, that were ordeined of the Apostles and Elders, which were at Hierusalem.

5 And so were the Churches established in the faith, and increased in number dayly.

6 Now when they had gone thorowout Phrygia, and the region of Galatia, and were forbidden of the holy Ghost to preach the word in Asia,

7 After they were come to Mysia, they assayed to goe into Bithynia: but the Spirit suffered them not.

8 And they passing by Mysia, came downe to Troas.

10 And after he had seene the vision, immediatly we endeuoured to goe into Macedonia, assuredly gathering, that the Lord had called vs for to preach the Gospel vnto them.

11 Therfore loosing from Troas, we came with a straight course to Samothracia, and the next day to Neapolis:

12 And from thence to Philippi, which is the chiefe citie of that part of Macedonia, and a Colonie: and we were in that citie abiding certaine dayes.

13 And on the Sabboth we went out of the citie by a riuer side, where prayer was wont to be made, & we sate downe, and spake vnto the women which resorted thither.

14 ¶ And a certaine woman named Lydia, a seller of purple, of the citie of Thyatira, which worshipped God, heard vs: whose heart the Lord opened, that she attended vnto the things which were spoken of Paul.

15 And when she was baptized, and her houshold, she besought vs, saying, If ye haue iudged me to bee faithfull to the Lord, come into my house, and abide there. And she constrained vs.

16 ¶ And it came to passe, as we went to prayer, a certaine Damosell possessed with a spirit of diuination, met vs: which brought her masters much gaine by soothsaying.

17 The same followed Paul and vs, and cried, saying, These men are the seruants of the most hie God, which shew vnto vs the way of saluation.

18 And this did she many dayes: but Paul being grieued, turned and said to the spirit, I command thee in the Name of Iesus Christ, to come out of her. And he came out the same houre.

19 ¶ And when her Masters saw that the hope of their gaines was gone, they caught Paul and Silas, and drew them into the market place, vnto the rulers,

20 And brought them to the Magistrates, saying, These men being Iewes, do exceedingly trouble our city,

21 And teach customes which are not lawfull for vs to receiue, neither to obserue, being Romanes.

22 And the multitude rose vp together against them, and the Magistrates rent off their clothes, and commanded to beate them.

23 And when they had layed many stripes vpon them, they cast them into prison, charging the Iaylour to keepe them safely.

24 Who hauing receiued such a charge, thrust them into the inner prison, & made their feet fast in the stockes.

25 ¶ And at midnight, Paul and Silas prayed, and sang praises vnto God: and the prisoners heard them.

26 And suddenly there was a great earthquake, so that the foundations of the prison were shaken: and immediately all the doores were opened, and euery ones bands were loosed.

27 And the keeper of the prison awaking out of his sleepe, and seeing the prison doores open, he drew out his sword, and would haue killed himselfe, supposing that the prisoners had beene fled.

28 But Paul cried with a loud voice, saying, Doe thy selfe no harme, for we are all heere.

29 Then hee called for a light, and sprang in, and came trembling, and fell downe before Paul and Silas,

30 And brought them out, and said, Sirs, what must I doe to be saued?

31 And they saide, Beleeue on the Lord Iesus Christ, and thou shalt be saued, and thy house.

32 And they spake vnto him the word of the Lord, and to all that were in his house.

33 And hee tooke them the same houre of the night, and washed their stripes, and was baptized, hee and all his, straightway.

34 And when he had brought them into his house, hee set meat before them, and reioyced, beleeuing in God with all his house.

35 And when it was day, the Magistrates sent the Sergeants, saying, Let those men goe.

36 And the keeper of the prison told this saying to Paul, The Magistrates haue sent to let you goe: Now therefore depart, and goe in peace.

37 But Paul said vnto them, They haue beaten vs openly vncondemned, being Romanes, and haue cast vs into prison, and now doe they thrust vs out priuily? Nay verily, but let them come themselues, and fetch vs out.

38 And the Sergeants tolde these words vnto the Magistrates: and they feared when they heard that they were Romanes.

39 And they came and besought them, and brought them out, and desired them to depart out of the citie.

40 And they went out of the prison, and entred into the house of Lydia, and when they had seene the brethren, they comforted them, and departed.

Paul takes Timothy to be his assistant. (1-5) Paul proceeds to Macedonia, The conversion of Lydia. (6-15) An evil spirit cast out, Paul and Silas scourged and imprisoned. (16-24) The conversion of the jailer at Philippi. (25-34) Paul and Silas released. (35-40)1-5 Well may the church look for much service from youthful ministers who set out in the same spirit as Timothy. But when men will submit in nothing, and oblige in nothing, the first elements of the Christian temper seem to be wanting; and there is great reason to believe that the doctrines and precepts of the gospel will not be successfully taught. The design of the decree being to set aside the ceremonial law, and its carnal ordinances, believers were confirmed in the Christian faith, because it set up a spiritual way of serving God, as suited to the nature both of God and man. Thus the church increased in numbers daily.

6-15 The removals of ministers, and the dispensing the means of grace by them, are in particular under Divine conduct and direction. We must follow Providence: and whatever we seek to do, if that suffer us not, we ought to submit and believe to be for the best. People greatly need help for their souls, it is their duty to look out for it, and to invite those among them who can help them. And God's calls must be complied with readily. A solemn assembly the worshippers of God must have, if possible, upon the sabbath day. If we have not synagogues, we must be thankful for more private places, and resort to them; not forsaking the assembling together, as our opportunities are. Among the hearers of Paul was a woman, named Lydia. She had an honest calling, which the historian notices to her praise. Yet though she had a calling to mind, she found time to improve advantages for her soul. It will not excuse us from religious duties, to say, We have a trade to mind; for have not we also a God to serve, and souls to look after? Religion does not call us from our business in the world, but directs us in it. Pride, prejudice, and sin shut out the truths of God, till his grace makes way for them into the understanding and affections; and the Lord alone can open the heart to receive and believe his word. We must believe in Jesus Christ; there is no coming to God as a Father, but by the Son as Mediator.

16-24 Satan, though the father of lies, will declare the most important truths, when he can thereby serve his purposes. But much mischief is done to the real servants of Christ, by unholy and false preachers of the gospel, who are confounded with them by careless observers. Those who do good by drawing men from sin, may expect to be reviled as troublers of the city. While they teach men to fear God, to believe in Christ, to forsake sin, and to live godly lives, they will be accused of teaching bad customs.

25-34 The consolations of God to his suffering servants are neither few nor small. How much more happy are true Christians than their prosperous enemies! As in the dark, so out of the depths, we may cry unto God. No place, no time is amiss for prayer, if the heart be lifted up to God. No trouble, however grievous, should hinder us from praise. Christianity proves itself to be of God, in that it obliges us to be just to our own lives. Paul cried aloud to make the jailer hear, and to make him heed, saying, Do thyself no harm. All the cautions of the word of God against sin, and all appearances of it, and approaches to it, have this tendency. Man, woman, do not ruin thyself; hurt not thyself, and then none else can hurt thee; do not sin, for nothing but that can hurt thee. Even as to the body, we are cautioned against the sins which do harm to that. Converting grace changes people's language of and to good people and good ministers. How serious the jailer's inquiry! His salvation becomes his great concern; that lies nearest his heart, which before was furthest from his thoughts. It is his own precious soul that he is concerned about. Those who are thoroughly convinced of sin, and truly concerned about their salvation, will give themselves up to Christ. Here is the sum of the whole gospel, the covenant of grace in a few words; Believe in the Lord Jesus Christ, and thou shalt be saved, and thy house. The Lord so blessed the word, that the jailer was at once softened and humbled. He treated them with kindness and compassion, and, professing faith in Christ, was baptized in that name, with his family. The Spirit of grace worked such a strong faith in them, as did away further doubt; and Paul and Silas knew by the Spirit, that a work of God was wrought in them. When sinners are thus converted, they will love and honour those whom they before despised and hated, and will seek to lessen the suffering they before desired to increase. When the fruits of faith begin to appear, terrors will be followed by confidence and joy in God.

35-40 Paul, though willing to suffer for the cause of Christ, and without any desire to avenge himself, did not choose to depart under the charge of having deserved wrongful punishment, and therefore required to be dismissed in an honourable manner. It was not a mere point of honour that the apostle stood upon, but justice, and not to himself so much as to his cause. And when proper apology is made, Christians should never express personal anger, nor insist too strictly upon personal amends. The Lord will make them more than conquerors in every conflict; instead of being cast down by their sufferings, they will become comforters of their brethren.

View All Discussusion for Acts Chapter 16... 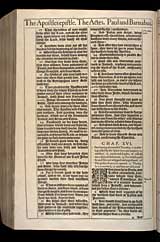