1 And certaine men which came downe from Iudea, taught the brethren, and said, Except ye be circumcised after the manner of Moses, ye cannot be saued.

2 When therefore Paul and Barnabas had no small dissention and disputation with them, they determined that Paul and Barnabas, and certeine other of them, should goe vp to Hierusalem vnto the Apostles and Elders about this question.

3 And being brought on their way by the Church, they passed thorow Phenice and Samaria, declaring the conuersion of the Gentiles: and they caused great ioy vnto all the brethren.

4 And when they were come to Hierusalem, they were receiued of the Church, and of the Apostles, and Elders, and they declared all things that God had done with them.

5 But there rose vp certaine of the sect of the Pharisees which beleeued, saying, that it was needfull to circumcise them, and to cōmand them to keepe the Law of Moses.

6 ¶ And the Apostles & Elders came together for to consider of this matter.

7 And when there had bene much disputing, Peter rose vp, and said vnto them, Men and brethren, ye know how that a good while agoe, God made choise among vs, that the Gentiles by my mouth should heare the worde of the Gospel, and beleeue.

8 And God which knoweth the hearts, bare them witnes, giuing them the holy Ghost, euen as he did vnto vs,

9 And put no difference between vs & them, purifying their hearts by faith.

10 Now therfore why tempt ye God, to put a yoke vpon the necke of the disciples, which neither our fathers nor we were able to beare?

11 But we beleeue that through the grace of the Lord Iesus Christ, we shal be saued euen as they.

12 ¶ Then all the multitude kept silence, and gaue audience to Barnabas and Paul, declaring what miracles and wonders God had wrought among the Gentiles by them.

13 ¶ And after they had helde their peace, Iames answered, saying, Men and brethren, hearken vnto me.

14 Simeon hath declared how God at the first did visite the Gentiles to take out of them a people for his Name.

15 And to this agree the words of the Prophets, as it is written,

17 That the residue of men might seeke after the Lord, and all the Gentiles, vpon whom my Name is called, sayth the Lord, who doeth all these things.

18 Knowen vnto God are all his workes frō the beginning of the world.

19 Wherefore my sentence is, that we trouble not them, which from among the Gentiles are turned to God:

20 But that wee write vnto them, that they abstaine from pollutions of Idoles, and from fornication, and from things strangled, and from blood.

21 For Moses of olde time hath in euery citie them that preach him, being read in the Synagogues euery Sabbath day.

22 Then pleased it the Apostles and Elders with the whole Church, to send chosen men of their owne company to Antioch, with Paul and Barnabas: namely, Iudas surnamed Barsabas, & Silas, chiefe men among the brethren,

23 And wrote letters by them after this maner, The Apostles and Elders, and brethren, send greeting vnto the brethren, which are of the Gentiles in Antioch, and Syria, and Cilicia.

24 Forasmuch as we haue heard, that certaine which went out from vs, haue troubled you with words, subuerting your soules, saying, Ye must be circumcised, and keepe the Law, to whom we gaue no such commandement:

25 It seemed good vnto vs, being assembled with one accord, to send chosen men vnto you, with our beloued Barnabas and Paul,

26 Men that haue hazarded their liues for the Name of our Lord Iesus Christ.

27 Wee haue sent therefore Iudas and Silas, who shall also tell you the same things by mouth.

28 For it seemed good to the holy Ghost, and to vs, to lay vpon you no greater burden then these necessarie things;

29 That ye abstaine from meates offered to idoles, and from blood, & from things strangled, and from fornication: from which if ye keepe your selues, yee shall doe well. Fare ye well.

30 So when they were dismissed, they came to Antioch: and when they had gathered the multitude together, they deliuered the Epistle.

31 Which when they had read, they reioyced for the consolation.

32 And Iudas and Silas, being Prophets also themselues, exhorted the brethren with many words, and confirmed them:

33 And after they had taried there a space, they were let goe in peace from the breehren vnto the Apostles.

34 Notwithstanding it pleased Silas to abide there still.

35 Paul also and Barnabas continued in Antioch, teaching and preaching the word of the Lord, with many others also.

36 ¶ And some dayes after, Paul said vnto Barnabas, Let vs go againe and visit our brethren, in euery city where we haue preached the word of the Lord, and see how they doe.

37 And Barnabas determined to take with them Iohn, whose surname was Marke.

38 But Paul thought not good to take him with them; who departed from them from Pamphylia, and went not with them to the worke.

39 And the contention was so sharpe betweene them, that they departed asunder one from the other: & so Barnabas tooke Marke, & sailed vnto Cyprus.

40 And Paul chose Silas, and departed, being recommended by the brethren vnto the grace of God.

41 And he went thorow Syria and Cilicia, confirming the Churches.

The dispute raised by Judaizing teachers. (1-6) The council at Jerusalem. (7-21) The letter from the council. (22-35) Paul and Barnabas separate. (36-41)1-6 Some from Judea taught the Gentile converts at Antioch, that they could not be saved, unless they observed the whole ceremonial law as given by Moses; and thus they sought to destroy Christian liberty. There is a strange proneness in us to think that all do wrong who do not just as we do. Their doctrine was very discouraging. Wise and good men desire to avoid contests and disputes as far as they can; yet when false teachers oppose the main truths of the gospel, or bring in hurtful doctrines, we must not decline to oppose them.

7-21 We see from the words "purifying their hearts by faith," and the address of St. Peter, that justification by faith, and sanctification by the Holy Ghost, cannot be separated; and that both are the gift of God. We have great cause to bless God that we have heard the gospel. May we have that faith which the great Searcher of hearts approves, and attests by the seal of the Holy Spirit. Then our hearts and consciences will be purified from the guilt of sin, and we shall be freed from the burdens some try to lay upon the disciples of Christ. Paul and Barnabas showed by plain matters of fact, that God owned the preaching of the pure gospel to the Gentiles without the law of Moses; therefore to press that law upon them, was to undo what God had done. The opinion of James was, that the Gentile converts ought not to be troubled about Jewish rites, but that they should abstain from meats offered to idols, so that they might show their hatred of idolatry. Also, that they should be cautioned against fornication, which was not abhorred by the Gentiles as it should be, and even formed a part of some of their rites. They were counselled to abstain from things strangled, and from eating blood; this was forbidden by the law of Moses, and also here, from reverence to the blood of the sacrifices, which being then still offered, it would needlessly grieve the Jewish converts, and further prejudice the unconverted Jews. But as the reason has long ceased, we are left free in this, as in the like matters. Let converts be warned to avoid all appearances of the evils which they formerly practised, or are likely to be tempted to; and caution them to use Christian liberty with moderation and prudence.

22-35 Being warranted to declare themselves directed by the immediate influence of the Holy Ghost, the apostles and disciples were assured that it seemed good unto God the Holy Spirit, as well as to them, to lay upon the converts no other burden than the things before mentioned, which were necessary, either on their own account, or from present circumstances. It was a comfort to hear that carnal ordinances were no longer imposed on them, which perplexed the conscience, but could not purify or pacify it; and that those who troubled their minds were silenced, so that the peace of the church was restored, and that which threatened division was removed. All this was consolation for which they blessed God. Many others were at Antioch. Where many labour in the word and doctrine, yet there may be opportunity for us: the zeal and usefulness of others should stir us up, not lay us asleep.

36-41 Here we have a private quarrel between two ministers, no less than Paul and Barnabas, yet made to end well. Barnabas wished his nephew John Mark to go with them. We should suspect ourselves of being partial, and guard against this in putting our relations forward. Paul did not think him worthy of the honour, nor fit for the service, who had departed from them without their knowledge, or without their consent: see ch. 13:13|. Neither would yield, therefore there was no remedy but they must part. We see that the best of men are but men, subject to like passions as we are. Perhaps there were faults on both sides, as usual in such contentions. Christ's example alone, is a copy without a blot. Yet we are not to think it strange, if there are differences among wise and good men. It will be so while we are in this imperfect state; we shall never be all of one mind till we come to heaven. But what mischief the remainders of pride and passion which are found even in good men, do in the world, and do in the church! Many who dwelt at Antioch, who had heard but little of the devotedness and piety of Paul and Barnabas, heard of their dispute and separation; and thus it will be with ourselves, if we give way to contention. Believers must be constant in prayer, that they may never be led by the allowance of unholy tempers, to hurt the cause they really desire to serve. Paul speaks with esteem and affection both of Barnabas and Mark, in his epistles, written after this event. May all who profess thy name, O loving Saviour, be thoroughly reconciled by that love derived from thee which is not easily provoked, and which soon forgets and buries injuries.

View All Discussusion for Acts Chapter 15... 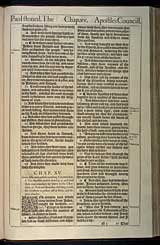