1 The former treatise haue I made, O Theophilus, of al that Iesus began both to doe and teach,

2 Untill the day in which hee was taken vp, after that he through the holy Ghost had giuen commaundements vnto the Apostles, whom he had chosen.

3 To whom also he shewed himselfe aliue after his passion, by many infallible proofes, being seene of them fourty dayes, and speaking of the things perteining to the kingdome of God:

4 And being assembled together with them, commanded them that they should not depart from Hierusalem, but wait for the promise of the Father, which, saith he, ye haue heard of me.

6 When they therefore were come together, they asked of him, saying, Lord, wilt thou at this time restore againe the kingdome to Israel?

7 And he said vnto them, It is not for you to knowe the times or the seasons, which the Father hath put in his owne power.

8 But ye shall receiue power after that the holy Ghost is come vpon you, and ye shall be witnesses vnto me, both in Hierusalem, and in all Iudea, and in Samaria, and vnto the vttermost part of the earth.

9 And when hee had spoken these things, while they beheld, hee was taken vp, and a cloud receiued him out of their sight.

10 And while they looked stedfastly toward heauen, as he went vp, behold, two men stood by them in white apparell,

11 Which also said, Yee men of Galililee, why stand yee gazing vp into heauen? This same Iesus, which is taken vp from you into heauen, shall so come, in like maner as yee haue seene him goe into heauen.

12 Then returned they vnto Hierusalem, from the mount called Oliuet, which is from Hierusalem a Sabbath dayes iourney.

13 And when they were come in, they went vp into an vpper roome, where abode both Peter & Iames, & Iohn, and Andrew, Philip, and Thomas, Bartholomew, and Matthew, Iames the sonne of Alpheus, and Simon Zelotes, and Iudas the brother of Iames.

14 These all continued with one accord in prayer and supplication, with the women, and Mary the mother of Iesus, and with his brethen.

15 ¶ And in those dayes Peter stood vp in the mids of the disciples, and said, (The number of names together were about an hundred and twentie)

16 Men and brethren, This Scripture must needs haue beene fulfilled, which the holy Ghost by the mouth of Dauid spake before concerning Iudas, which was guide to them þt took Iesus.

17 For hee was numbred with vs, and had obtained part of this ministerie.

18 Now this man purchased a field with the reward of iniquity, and falling headlong, he burst asunder in the mids, and all his bowels gushed out.

19 And it was knowen vnto all the dwellers at Hierusalem, insomuch as that field is called in their proper tongue, Aceldama, that is to say, The field of blood.

20 For it is written in the booke of Psalmes, Let his habitation be desolate, and let no man dwell therein: And his Bishopricke let another take.

21 Wherefore of these men which haue companied with vs all the time that the Lord Iesus went in and out among vs,

22 Beginning from the baptisme of Iohn, vnto that same day that he was taken vp from vs, must one be ordained to be a witnesse with vs of his resurrection.

23 And they appointed two, Ioseph called Barsabas, who was surnamed Iustus, and Matthias.

24 And they prayed, and said, Thou Lord, which knowest the hearts of all men, shew whether of these two thou hast chosen,

25 That hee may take part of this ministerie and Apostleship, from which Iudas by transgression fell, that hee might goe to his owne place.

26 And they gaue foorth their lots, and the lot fell vpon Matthias, and hee was numbred with the eleuen Apostles.

This book unites the Gospels to the Epistles. It contains many particulars concerning the apostles Peter and Paul, and of the Christian church from the ascension of our Saviour to the arrival of St. Paul at Rome, a space of about thirty years. St. Luke was the writer of this book; he was present at many of the events he relates, and attended Paul to Rome. But the narrative does not afford a complete history of the church during the time to which it refers, nor even of St. Paul's life. The object of the book has been considered to be, 1. To relate in what manner the gifts of the Holy Spirit were communicated on the day of Pentecost, and the miracles performed by the apostles, to confirm the truth of Christianity, as showing that Christ's declarations were really fulfilled. 2. To prove the claim of the Gentiles to be admitted into the church of Christ. This is shown by much of the contents of the book. A large portion of the Acts is occupied by the discourses or sermons of various persons, the language and manner of which differ, and all of which will be found according to the persons by whom they were delivered, and the occasions on which they were spoken. It seems that most of these discourses are only the substance of what was actually delivered. They relate nevertheless fully to Jesus as the Christ, the anointed Messiah.Proofs of Christ's resurrection. (1-5) Christ's ascension. (6-11) The apostles unite in prayer. (12-14) Matthias chosen in the place of Judas. (15-26)1-5 Our Lord told the disciples the work they were to do. The apostles met together at Jerusalem; Christ having ordered them not to depart thence, but to wait for the pouring out of the Holy Spirit. This would be a baptism by the Holy Ghost, giving them power to work miracles, and enlightening and sanctifying their souls. This confirms the Divine promise, and encourages us to depend upon it, that we have heard it from Christ; for in Him all the promises of God are yea and amen.

6-11 They were earnest in asking about that which their Master never had directed or encouraged them to seek. Our Lord knew that his ascension and the teaching of the Holy Spirit would soon end these expectations, and therefore only gave them a rebuke; but it is a caution to his church in all ages, to take heed of a desire of forbidden knowledge. He had given his disciples instructions for the discharge of their duty, both before his death and since his resurrection, and this knowledge is enough for a Christian. It is enough that He has engaged to give believers strength equal to their trials and services; that under the influence of the Holy Spirit they may, in one way or other, be witnesses for Christ on earth, while in heaven he manages their concerns with perfect wisdom, truth, and love. When we stand gazing and trifling, the thoughts of our Master's second coming should quicken and awaken us: when we stand gazing and trembling, they should comfort and encourage us. May our expectation of it be stedfast and joyful, giving diligence to be found of him blameless.

12-14 God can find hiding-places for his people. They made supplication. All God's people are praying people. It was now a time of trouble and danger with the disciples of Christ; but if any is afflicted, let him pray; that will silence cares and fears. They had now a great work to do, and before they entered upon it, they were earnest in prayer to God for his presence. They were waiting for the descent of the Spirit, and abounded in prayer. Those are in the best frame to receive spiritual blessings, who are in a praying frame. Christ had promised shortly to send the Holy Ghost; that promise was not to do away prayer, but to quicken and encourage it. A little company united in love, exemplary in their conduct, fervent in prayer, and wisely zealous to promote the cause of Christ, are likely to increase rapidly.

15-26 The great thing the apostles were to attest to the world, was, Christ's resurrection; for that was the great proof of his being the Messiah, and the foundation of our hope in him. The apostles were ordained, not to wordly dignity and dominion, but to preach Christ, and the power of his resurrection. An appeal was made to God; "Thou, Lord, who knowest the hearts of all men," which we do not; and better than they know their own. It is fit that God should choose his own servants; and so far as he, by the disposals of his providence, or the gifts of his Spirit, shows whom he was chosen, or what he has chosen for us, we ought to fall in with his will. Let us own his hand in the determining everything which befalls us, especially in those by which any trust may be committed to us.

View All Discussusion for Acts Chapter 1... 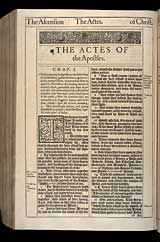