1 Againe, Dauid gathered together all the chosen men of Israel, thirtie thousand:

2 And Dauid arose and went with all the people that were with him, from Baale of Iudah, to bring vp from thence the Arke of God, whose Name is called by the Name of the Lord of hostes, that dwelleth betweene the Cherubims.

3 And they set the Arke of God vpon a new cart, and brought it out of the house of Abinadab that was in Gibeah: and Uzzah and Ahio the sonnes of Abinadab, draue the new cart.

4 And they brought it out of the house of Abinadab which was at Gibeah, accompanying the Arke of God; and Ahio went before the Arke.

5 And Dauid and all the house of Israel played before the Lord on all manner of instruments made of Firrewood, euen on harpes, and on Psalteries, and on timbrels, and on cornets, and on cimbals.

6 ¶ And when they came to Nachons threshing floore, Uzzah put forth his hand to the Arke of God, and tooke hold of it, for the oxen shooke it.

7 And the anger of the Lord was kindled against Uzzah, and God smote him there for his errour, and there he died by the Arke of God.

8 And Dauid was displeased, because the Lord had made a breach vpon Uzzah: And hee called the name of the place, Perez-Uzzah to this day.

10 So Dauid would not remoue the Arke of the Lord vnto him into the citie of Dauid: but Dauid caried it aside into the house of Obed Edom, the Gittite.

11 And the Arke of the Lord continued in the house of Obed Edom the Gittite, three moneths: and the Lord blessed Obed Edom, and all his household.

13 And it was so, that when they that bare the Arke of the Lord, had gone sixe paces, hee sacrificed oxen and fatlings.

14 And Dauid daunced before the Lord with all his might, and Dauid was girded with a linnen Ephod.

15 So Dauid and all the house of Israel brought vp the Arke of the Lord with shouting, and with the sound of the trumpet.

16 And as the Arke of the Lord came into the citie of Dauid, Michal Sauls daughter looked through a window, and saw king Dauid leaping and dauncing before the Lord, and she despised him in her heart.

17 ¶ And they brought in the Arke of the Lord, and set it in his place, in the midst of the Tabernacle that Dauid had pitched for it: and Dauid offered burnt offerings, and peace offrings before the Lord.

18 And assoone as Dauid had made an end of offering burnt offerings and peace offerings, hee blessed the people in the Name of the Lord of hostes.

19 And hee dealt among all the people, euen among the whole multitude of Israel, as well to the women as men, to euery one a cake of bread, and a good piece of flesh, and a flagon of wine: so all the people departed euery one to his house.

20 ¶ Then Dauid returned to blesse his houshold: and Michal the daughter of Saul came out to meete Dauid, and said, How glorious was the King of Israel to day, who vncouered himselfe to day in the eyes of the handmaids of his seruants, as one of the vaine fellowes shamelessely vncouereth himselfe!

21 And Dauid said vnto Michal, It was before the Lord, which chose me before thy father, & before all his house, to appoint me ruler ouer the people of the Lord, ouer Israel: therefore will I play before the Lord.

22 And I will yet be more vile then thus, and will be base in mine owne sight: and of the maid seruants which thou hast spoken of, of them shall I be had in honour.

23 Therefore Michal the daughter of Saul had no childe vnto the day of her death.

The ark removed from Kirjath-jearim. (1-5) Uzzah smitten for touching the ark, Obed-edom blessed. (6-11) David brings the ark to Zion. (12-19) Michal's ill conduct. (20-23)1-5 God is present with the souls of his people, when they want the outward tokens of his presence; but now David is settled in the throne, the honour of the ark begins to revive. Let us learn hence, to think and to speak highly of God; and to think and speak honourably of holy ordinances, which are to us as the ark was unto Israel, the tokens of God's presence, #Mt 28:20|. Christ is our Ark; in and by him God manifests his favour, and accepts our prayers and praises. The ark especially typified Christ and his mediation, in which the name of Jehovah and all his glories are displayed. The priests should have carried the ark upon their shoulders. Philistines may carry the ark in a cart without suffering for it; but if Israelites do so, it is at their peril, because this was not what God appointed.

6-11 Uzzah was struck dead for touching the ark. God saw presumption and irreverence in Uzzah's heart. Familiarity, even with that which is most awful, is apt to breed contempt. If it were so great a crime for one to lay hold on the ark of the covenant who had no right to do so, what is it for those to lay claim to the privileges of the covenant that come not up to the terms of it? Obed-edom opened his doors without fear, knowing the ark was a savour of death unto death to those only who treated it wrong. The same hand that punished Uzzah's proud presumption, rewarded Obed-edom's humble boldness. Let none think the worse of the gospel for the judgments on those that reject it, but consider the blessings it brings to all who receive it. Let masters of families be encouraged to keep up religion in their families. It is good to live in a family that entertains the ark, for all about it will fare the better.

12-19 It became evident, that happy was the man who had the ark near him. Christ is indeed a Stone of stumbling, and a Rock of offence, to those that are disobedient; but to those that believe, he is a Corner-stone, elect, precious, #1Pe 2:6-8|. Let us be religious. Is the ark a blessing to others' houses? We may have it, and the blessing of it, without fetching it away from our neighbours. David, at first setting out, offered sacrifices to God. We are likely to speed in our enterprises, when we begin with God, and give diligence to seek peace with him. And we are so unworthy, and our services are so defiled, that all our joy in God must be connected with repentance and faith in the Redeemer's atoning blood. David attended with high expressions of joy. We ought to serve God with our whole body and soul, and with every endowment and power we possess. On this occasion David laid aside his royal robes, and put on a plain linen dress. David prayed with and for the people, and as a prophet, solemnly blessed them in the name of the Lord.

20-23 David returned to bless his household, to pray with them, and for them, and to offer up family thanksgiving for this national mercy. It is angels' work to worship God, surely that cannot lower the greatest of men. But even the palaces of princes are not free from family troubles. Exercises of religion appear mean in the eyes of those who have little or no religion themselves. If we can approve ourselves to God in what we do in religion, and do it as before the Lord, we need not heed reproach. Piety will have its praise: let us not be indifferent in it, nor afraid or ashamed to own it. David was contented to justify himself, and he did not further reprove or blame Michal's insolence; but God punished her. Those that honour God, he will honour; but those that despise him, and his servants and service, shall be lightly esteemed.

View All Discussusion for 2 Samuel Chapter 6... 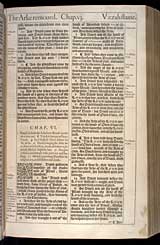