1 Then came all the tribes of Israel to Dauid vnto Hebron, and spake, saying, Behold, we are thy bone, and thy flesh.

2 Also in time past when Saul was king ouer vs, thou wast hee that leddest out and broughtest in Israel: and the Lord said to thee, Thou shalt feed my people Israel, and thou shalt bee a captaine ouer Israel.

3 So all the Elders of Israel came to the King to Hebron, and King Dauid made a league with them in Hebron before the Lord: and they anointed Dauid King ouer Israel.

4 ¶ Dauid was thirtie yeeres old when he began to reigne, and he reigned fourtie yeeres.

5 In Hebron he reigned ouer Iudah seuen yeeres, and sixe moneths: and in Ierusalem he reigned thirty and three yeres ouer all Israel and Iudah.

6 ¶ And the king and his men went to Ierusalem, vnto the Iebusites, the inhabitants of the land: which spake vnto Dauid, saying, Except thou take away the blind and the lame, thou shalt not come in hither: Thinking, Dauid cannot come in hither.

7 Neuerthelesse, Dauid tooke the strong hold of Zion: the same is the citie of Dauid.

8 And Dauid said on that day, Whosoeuer getteth vp to the gutter, and smiteth the Iebusites, and the lame, and the blind, that are hated of Dauids soule, he shall be chiefe and captaine: Wherefore they said, The blind and the lame shall not come into the house.

9 So Dauid dwelt in the fort, and called it the citie of Dauid, and Dauid built round about, from Millo and inward.

10 And Dauid went on, and grew great, and the Lord God of hosts was with him.

11 ¶ And Hiram king of Tyre sent messengers to Dauid, and Cedar trees, and carpenters, and Masons: and they built Dauid an house.

12 And Dauid perceiued that the Lord had established him King ouer Israel, and that he had exalted his kingdome for his people Israels sake.

13 ¶ And Dauid tooke him mo concubines and wiues out of Ierusalem, after he was come from Hebron, and there were yet sonnes and daughters borne to Dauid.

14 And these be the names of those that were borne vnto him in Ierusalem, Shammua, & Shobab, and Nathan, and Solomon:

15 Ibhar also, and Elishua, and Nepheg, and Iaphia,

16 And Elishama, and Eliada, and Eliphalet.

17 ¶ But when the Philistines heard that they had anointed Dauid King ouer Israel, all the Philistines came vp to seeke Dauid, and Dauid heard of it, and went downe to the hold.

18 The Philistines also came, and spred themselues in the valley of Rephaim.

19 And Dauid enquired of the Lord, saying, Shall I goe vp to the Philistines? wilt thou deliuer them into mine hand? And the Lord said vnto Dauid, Goe vp: for I will doubtlesse deliuer the Philistines into thine hand.

20 And Dauid came to Baal-Perazim, and Dauid smote them there, and said, The Lord hath broken foorth vpon mine enemies before me, as the breach of waters. Therefore he called the name of that place, Baal-Perazim.

21 And there they left their images, and Dauid and his men burnt them.

22 ¶ And the Philistines came vp yet againe, and spread themselues in the valley of Rephaim.

23 And when Dauid enquired of the Lord, he said, Thou shalt not goe vp: but fetch a compasse behinde them, and come vpon them ouer against the Mulbery trees.

24 And let it be when thou hearest the sound of a going in the tops of the mulbery trees, that then thou shalt bestirre thy selfe: for then shal the Lord goe out before thee, to smite the host of the Philistines.

25 And Dauid did so, as the Lord had commaunded him; and smote the Philistines from Geba, vntil thou come to Gazer.

David king over all Israel. (1-5) He takes the strong-hold of Zion. (6-10) David's kingdom established. (11-16) He defeats the Philistines. (17-25)1-5 David was anointed king a third time. His advances were gradual, that his faith might be tried, and that he might gain experience. Thus his kingdom typified that of the Messiah, which was to come to its height by degrees. Thus Jesus became our Brother, took upon him our nature, dwelt in it that he might become our Prince and Saviour: thus the humbled sinner takes encouragement from the endearing relation, applies for his salvation, submits to his authority, and craves his protection.

6-10 The enemies of God's people are often very confident of their own strength, and most secure when their day to fall draws nigh. But the pride and insolence of the Jebusites animated David, and the Lord God of hosts was with him. Thus in the day of God's power, Satan's strong-hold, the human heart, is changed into a habitation of God through the Spirit, and into a throne on which the Son of David rules, and brings every thought into obedience to himself. May He thus come, and claim, and cleanse, each of our hearts; and, destroying every idol, may he reign there for ever!

11-16 David's house was not the worse, nor the less fit to be dedicated to God, for being built by the sons of the stranger. It is prophesied of the gospel church, The sons of strangers shall build up thy walls, and their kings shall minister unto thee, #Isa 60:10|. David's government was rooted and built up. David was established king; so is the Son of David, and all who, through him, are made to our God kings and priests. Never had the nation of Israel appeared so great as it began now to be. Many have the favour and love of God, yet do not perceive it, and so want the comfort of it; but to be exalted to that, and to perceive it, is happiness. David owned it was for his people's sake God had done great things for him; that he might be a blessing to them, and that they might be happy under him.

17-25 The Philistines considered not that David had the presence of God with him, which Saul had forfeited and lost. The kingdom of the Messiah, as soon as it was set up in the world, was thus attacked by the powers of darkness. The heathen raged, and the kings of the earth set themselves to oppose it; but all in vain, #Ps 2:1, &c|. The destruction will turn, as this did, upon Satan's own kingdom. David owns dependence on God for victory; and refers himself to the good pleasure of God, Wilt thou do it? The assurance God has given us of victory over our spiritual enemies, should encourage us in our spiritual conflicts. David waited till God moved; he stirred then, but not till then. He was trained up in dependence on God and his providence. God performed his promise, and David failed not to improve his advantages. When the kingdom of the Messiah was to be set up, the apostles, who were to beat down the devil's kingdom, must not attempt any thing till they received the promise of the Spirit; who came with a sound from heaven, as of a rushing, mighty wind, #Ac 2:2|.

View All Discussusion for 2 Samuel Chapter 5... 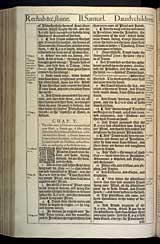