1 Then there was a famine in the dayes of Dauid three yeeres, yeere after yeere, and Dauid enquired of the Lord. And the Lord answered, It is for Saul, and for his bloodie house, because he slew the Gibeonites.

3 Wherefore Dauid said vnto the Gibeonites, What shall I doe for you? and wherwith shall I make the atonement, that ye may blesse the inheritance of the Lord ?

4 And the Gibeonites saide vnto him, We will haue no siluer nor golde of Saul, nor of his house, neither for vs shalt thou kill any man in Israel. And he said, What you shall say, that will I doe for you.

5 And they answered the king, The man that consumed vs, and that deuised against vs, that we should be destroied from remaining in any of the coasts of Israel,

6 Let seuen men of his sonnes bee deliuered vnto vs, and wee will hang them vp vnto the Lord in Gibeah of Saul, whome the Lord did chuse. And the king said, I will giue them.

8 But the king tooke the two sons of Rizpah the daughter of Aiah, whom she bare vnto Saul, Armoni and Mephibosheth, and the fiue sonnes of Michal the daughter of Saul, whome she brought vp for Adriel the sonne of Barzillai the Meholathite.

9 And hee deliuered them into the hands of the Gibeonites, and they hanged them in the hill before the Lord: and they fell all seuen together, and were put to death in the dayes of haruest, in the first dayes, in the beginning of barley haruest.

10 ¶ And Rizpah the daughter of Aiah tooke sackecloth, and spread it for her vpon the rocke, from the beginning of haruest, vntill water dropped vpon them out of heauen, and suffered neither the birds of the aire to rest on them by day, nor the beastes of the fielde by night.

11 And it was tolde Dauid what Rizpah the daughter of Aiah the concubine of Saul had done.

14 And the bones of Saul and Ionathan his sonne buried they in the countrey of Beniamin in Zelah, in the sepulchre of Kish his father: and they perfourmed all that the king commanded: and after that, God was entreated for the land.

16 And Ishbi-benob which was of the sonnes of the gyant, (the weight of whose speare weighed three hundred shekels of brasse in weight) he being girded with a new sword, thought to haue slaine Dauid.

17 But Abishai the sonne of Zeruiah succoured him, and smote the Philistine, and killed him. Then the men of Dauid sware vnto him, saying, Thou shalt goe no more out with vs to battell, that thou quench not the light of Israel.

18 And it came to passe after this, that there was againe a battell with the Philistines at Gob: then Sibbechai the Hushathite slew Saph, which was of the sonnes of the Gyant.

19 And there was againe a battell in Gob, with the Philistines, where Elhanan the sonne of Iaare-Oregim a Bethlehemite, slewe the brother of Goliath the Gittite, the staffe of whose speare was like a weauers beame.

20 And there was yet a battell in Gath, where was a man of great stature, that had on euery hand sixe fingers, and on euery foote sixe toes, foure and twenty in number, and he also was borne to the Gyant.

21 And when he defied Israel, Ionathan the sonne of Shimea the brother of Dauid, slew him.

The Gibeonites avenged. (1-9) Rizpah's care for the bodies of Saul's descendants. (10-14) Battles with the Philistines. (15-22)1-9 Every affliction arises from sin, and should lead us to repent and humble ourselves before God; but some troubles especially show that they are sent to bring sin to remembrance. God's judgments often look a great way back, which requires us to do so, when we are under his rebukes. It is not for us to object against the people's smarting for the sin of their king; perhaps they helped him. Nor against this generation suffering for the sin of the last. God often visits the sins of the fathers upon the children, and he gives no account of any matters. Time does not wear out the guilt of sin; nor can we build hopes of escape upon the delay of judgments. If we cannot understand all the reasons of Providence in this matter, still we have no right to demand that God should acquaint us with those reasons. It must be right, because it is the will of God, and in the end it will be proved to be so. Money is no satisfaction for blood. It should seem, Saul's posterity trod in his steps, for it is called a bloody house. It was the spirit of the family, therefore they are justly reckoned with for his sin, as well as for their own. The Gibeonites did not require this out of malice against Saul or his family. It was not to gratify any revenge, but for the public good. They were put to death at the beginning of harvest; they were thus sacrificed to turn away the wrath of Almighty God, who had withheld the harvest-mercies for some years past, and to obtain his favour in the present harvest. In vain do we expect mercy from God, unless we do justice upon our sins. Executions must not be thought cruel, which are for the public welfare.

10-14 That a guilty land should enjoy many years of plenty, calls for gratitude; and we need not wonder misused abundance should be punished with scarcity; yet how few are disposed to ask of the Lord concerning the sinful cause, while numbers search for the second causes by which he is pleased to work! But the Lord will plead the cause of those who cannot or will not avenge themselves; and the prayers of the poor are of great power. When God sent rain to water the earth, these bodies were buried, for then it appeared that God was entreated for the land. When justice is done on earth, vengeance from heaven ceases. God is pacified, and is entreated for us through Christ, who was hanged on a tree, and so made a curse for us, to do away our guilt, though he was himself guiltless.

15-22 These events seem to have taken place towards the end of David's reign. David fainted, but he did not flee, and God sent help in the time of need. In spiritual conflicts, even strong saints sometimes wax faint; then Satan attacks them furiously; but those who stand their ground and resist him, shall be relieved and made more than conquerors. Death is a Christian's last enemy, and a son of Anak; but through Him that triumphed for us, believers shall be more than conquerors at last, even over that enemy.

View All Discussusion for 2 Samuel Chapter 21... 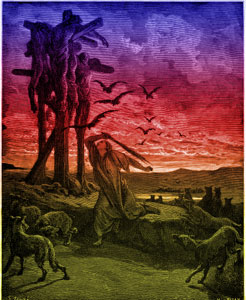 Rizpahs Kindness toward the Dead 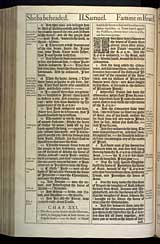