1 And it came to passe after this, that Absalom prepared him charets and horses, and fiftie men to runne before him.

2 And Absalom rose vp earely, and stood beside the way of the gate: and it was so, that when any man that had a controuersie, came to the king for iudgment, then Absalom called vnto him, and said, Of what citie art thou? And he said, Thy seruant is of one of the tribes of Israel.

3 And Absalom said vnto him, See, thy matters are good & right, but there is no man deputed of the king to heare thee.

4 Absalom said moreouer, Oh that I were made Iudge in the land, that euery man which hath any suit or cause, might come vnto me, and I would do him iustice.

5 And it was so, that when any man came nigh to him, to doe him obeisance, he put foorth his hand, and tooke him, and kissed him.

6 And on this maner did Absalom to all Israel, that came to the King for iudgement: so Absalom stole the hearts of the men of Israel.

7 ¶ And it came to passe after fourtie yeeres, that Absalom said vnto the king, I pray thee, let mee goe and pay my vow which I haue vowed vnto the Lord in Hebron.

8 For thy seruant vowed a vowe while I abode at Geshur in Syria, saying, If the Lord shall bring mee againe in deed to Ierusalem, then I will serue the Lord.

9 And the king said vnto him, Goe in peace. So he arose, and went to Hebron.

10 ¶ But Absalom sent spies thorowout all the tribes of Israel, saying, As soone as yee heare the sound of the trumpet, then yee shall say, Absalom reigneth in Hebron.

11 And with Absalom went two hundred men out of Ierusalem, that were called, and they went in their simplicitie, and they knew not any thing.

12 And Absalom sent for Ahithophel the Gilonite, Dauids counseller, from his citie, euen from Giloh, while he offered sacrifices: and the conspiracie was strong, for the people encreased continually with Absalom.

13 ¶ And there came a messenger to Dauid, saying, The hearts of the men of Israel are after Absalom.

14 And Dauid said vnto all his seruants that were with him at Ierusalem, Arise, and let vs flee; for wee shall not else escape from Absalom: make speede to depart, lest hee ouertake vs suddenly, and bring euill vpon vs, and smite the city with the edge of the sword.

15 And the kings seruants said vnto the king, Behold, thy seruants are readie to doe whatsoeuer my lord the king shall appoint.

16 And the king went foorth, and all his houshold after him: and the King left tenne women, which were concubines, to keepe the house.

17 And the king went forth, and all the people after him, and taried in a place that was farre off.

19 ¶ Then said the king to Ittai the Gittite, Wherefore goest thou also with vs? Returne to thy place, and abide with the King: for thou art a stranger, and also an exile.

20 Whereas thou camest but yesterday, should I this day make thee goe vp and downe with vs? Seeing I goe whither I may, returne thou, and take backe thy brethren: mercie and trueth be with thee.

21 And Ittai answered the King, and said, As the Lord liueth, and as my lord the king liueth, surely in what place my lord the king shall be, whether in death or life, euen there also will thy seruant be.

22 And Dauid said to Ittai, Goe, and passe ouer. And Ittai the Gittite passed ouer, and all his men, and all the little ones that were with him.

24 ¶ And loe, Zadok also, and all the Leuites were with him, bearing the Arke of the Couenant of God, and they set downe the Arke of God; and Abiathar went vp, vntill all the people had done passing out of the citie.

25 And the King said vnto Zadok, Cary backe the Arke of God into the citie: if I shall finde fauour in the eyes of the Lord, he wil bring me againe, and shew me both it, and his habitation.

26 But if he thus say, I haue no delight in thee: beholde, here am I, let him doe to me, as seemeth good vnto him.

27 The king said also vnto Zadok the Priest, Art not thou a Seer? Returne into the citie in peace, and your two sonnes with you, Ahimaaz thy sonne, and Ionathan the sonne of Abiathar.

28 See, I will tarie in the plaine of the wildernesse, vntill there come word from you to certifie me.

29 Zadok therefore and Abiathar caried the Arke of God againe to Ierusalem; and they taried there.

30 ¶ And Dauid went vp by the ascent of mount Oliuet, and wept as he went vp, and had his head couered, and he went barefoote, and all the people that was with him, couered euery man his head, and they went vp, weeping as they went vp.

31 ¶ And one tolde Dauid, saying, Ahithophel is among the conspirators with Absalom. And Dauid sayde, O Lord, I pray thee turne the counsell of Ahithophel into foolishnesse.

32 ¶ And it came to passe, that when Dauid was come to the top of the mount, where he worshipped God, behold, Hushai the Archite came to meet him, with his coat rent, and earth vpon his head:

33 Unto whom Dauid said, If thou passest on with me, then thou shalt be a burden vnto me.

34 But if thou returne to the citie, and say vnto Absalom, I wil be thy seruant, O king: as I haue bene thy fathers seruant hitherto, so will I now also be thy seruant: then mayest thou for mee defeat the counsell of Ahithophel.

36 Behold, they haue there with them their two sonnes, Ahimaaz Zadoks sonne, and Ionathan Abiathars sonne: and by them ye shall send vnto me euery thing that ye can heare.

37 So Hushai Dauids friend came into the citie, and Absalom came into Ierusalem.

Absalom's ambition. (1-6) His conspiracy. (7-12) David leaves Jerusalem. (13-23) David sends back the ark. (24-30) He prays against Ahithophel's counsel. (31-37)1-6 David allows Absalom's pomp. Those parents know not what they do, who indulge a proud humour in their children: many young people are ruined by pride. And those commonly are most eager for authority who least understand its duties.

7-12 See how willing tender parents are to believe the best concerning their children. But how easy and how wicked is it, for children to take advantage of good parents, and to deceive them with the show of religion! The principal men of Jerusalem joined Absalom's feast upon his sacrifice. Pious persons are glad to see others appear religious, and this gives occasion for deceptions. The policy of wicked men, and the subtlety of Satan, are exerted to draw good persons to countenance base designs.

13-23 David determined to quit Jerusalem. He took this resolve, as a penitent submitting to the rod. Before unrighteous Absalom he could justify himself, and stand out; but before the righteous God he must condemn himself, and yield to his judgments. Thus he accepts the punishment of his sin. And good men, when they themselves suffer, are anxious that others should not be led to suffer with them. He compelled none; those whose hearts were with Absalom, to Absalom let them go, and so shall their doom be. Thus Christ enlists none but willing followers. David cannot bear to think that Ittai, a stranger and an exile, a proselyte and a new convert, who ought to be encouraged and made easy, should meet with hard usage. But such value has Ittai for David's wisdom and goodness, that he will not leave him. He is a friend indeed, who loves at all times, and will adhere to us in adversity. Let us cleave to the Son of David, with full purpose of heart, and neither life nor death shall separate us from his love.

24-30 David is very careful for the safety of the ark. It is right to be more concerned for the church's prosperity than our own; to prefer the success of the gospel above our own wealth, credit, ease, and safety. Observe with what satisfaction and submission David speaks of the Divine disposal. It is our interest, as well as our duty, cheerfully to acquiesce in the will of God, whatever befalls us. Let us see God's hand in all events; and that we may not be afraid of what shall be, let us see all events in God's hand. David's sin was ever before him, #Ps 51:3|; but never so plain, nor ever appearing so black as now. He never wept thus when Saul hunted him, but a wounded conscience makes troubles lie heavy, #Ps 38:4|.

31-37 David prays not against Ahithophel's person, but against his counsel. He prayed this, in firm belief that God has all hearts in his hand, and tongues also. But we must second our prayers with endeavours, and David did so, else we tempt God. But we do not find wisdom and simplicity so united in any mere man, that we can perceive nothing which needs forgiveness. Yet, when the Son of David was treated with all possible treachery and cruelty, his wisdom, meekness, candour, and patience, were perfect. Him let us follow, cleave to, and serve, in life and in death.

View All Discussusion for 2 Samuel Chapter 15... 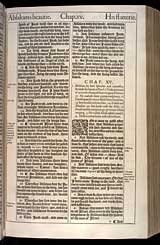