1 But there were false prophets also among the people, euen as there shall bee false teachers among you, who priuily shall bring in damnable heresies, euen denying the Lord that bought them, and bring vpon themselues swift destruction.

2 And many shall follow their pernicious wayes, by reason of whom the way of trueth shall be euill spoken of:

3 And through couetousnesse shall they with fained words, make marchandise of you, whose iudgement now of a long time lingereth not, and their damnation slumbreth not.

4 For if God spared not the Angels that sinned, but cast them downe to hell, and deliuered them into chaines of darkenesse, to be reserued vnto iudgment:

5 And spared not the old world, but saued Noah the eight person a preacher of righteousnesse, bringing in the flood vpon the world of the vngodly:

6 And turning the cities of Sodom and Gomorrha into ashes, condemned them with an ouerthrowe, making them an ensample vnto those that after should liue vngodly:

7 And deliuered iust Lot, vexed with the filthy conuersation of the wicked:

8 (For that righteous man dwelling among them, in seeing & hearing, vexed his righteous soule from day to day, with their vnlawfull deeds.)

9 The Lord knoweth how to deliuer the godly out of temptations, and to reserue the vniust vnto the day of iudgement to be punished:

10 But chiefly them that walke after the flesh in the lust of vncleannesse, and despise gouernment. Presumptuous are they; selfe willed: they are not afraid to speake euill of dignities:

11 Whereas Angels which are greater in power and might, bring not railing accusation against them before the Lord.

12 But these, as natural bruit beasts made to bee taken and destroyed speake euill of the things that they vnderstand not, and shall vtterly perish in their owne corruption,

13 And shall receiue the reward of vnrighteousnesse, as they that count it pleasure to riot in the day time: Spots they are and blemishes, sporting themselues with their owne deceiuings, while they feast with you:

15 Which haue forsaken the right way, and are gone astray, following the way of Balaam the sonne of Bosor, who loued the wages of vnrighteousnesse,

16 But was rebuked for his iniquity: the dumbe asse speaking with mais voice, forbade the madnesse of the Prophet.

17 These are welles without water, cloudes that are caried with a tempest, to whom the mist of darkenesse is reserued for euer.

18 For when they speake great svelling words of vanitie, they alure through the lusts of the flesh, through much wantonnesse, those that were cleane escaped from them who liue in errour.

19 While they promise them libertie, they themselues are the seruants of corruption: for of whom a man is ouercome, of the same is he brought in bondage.

20 For if after they haue escaped the pollutions of the world through the knowledge of the Lord and Sauiour Iesus Christ, they are againe intangled therein, and ouercome, the latter end is worse with them then the beginning.

21 For it had bin better for them not to haue knowen the way of righteousnesse, then after they haue knowen it, to turne from the holy commandement deliuered vnto them.

22 But it is happened vnto them according to the true prouerbe: The dog is turned to his own vomit againe, and the sowe that was washed, to her wallowing in the mire.

Believers are cautioned against false teachers, and the certainty of their punishment shown from examples. (1-9) An account of these seducers, as exceedingly wicked. (10-16) But as making high pretences to liberty and purity. (17-22)1-9 Though the way of error is a hurtful way, many are always ready to walk therein. Let us take care we give no occasion to the enemy to blaspheme the holy name whereby we are called, or to speak evil of the way of salvation by Jesus Christ, who is the Way, the Truth, and the Life. These seducers used feigned words, they deceived the hearts of their followers. Such are condemned already, and the wrath of God abides upon them. God's usual method of proceeding is shown by examples. Angels were cast down from all their glory and dignity, for their disobedience. If creatures sin, even in heaven, they must suffer in hell. Sin is the work of darkness, and darkness is the wages of sin. See how God dealt with the old world. The number of offenders no more procures favour, than their quality. If the sin be universal, the punishment shall likewise extend to all. If in a fruitful soil the people abound in sin, God can at once turn a fruitful land into barrenness, and a well-watered country into ashes. No plans or politics can keep off judgments from a sinful people. He who keeps fire and water from hurting his people, #Isa 43:2|, can make either destroy his enemies; they are never safe. When God sends destruction on the ungodly, he commands deliverance for the righteous. In bad company we cannot but get either guilt or grief. Let the sins of others be troubles to us. Yet it is possible for the children of the Lord, living among the most profane, to retain their integrity; there being more power in the grace of Christ, and his dwelling in them, than in the temptations of Satan, or the example of the wicked, with all their terrors or allurements. In our intentions and inclinations to commit sin, we meet with strange hinderances, if we mark them When we intend mischief, God sends many stops to hinder us, as if to say, Take heed what you do. His wisdom and power will surely effect the purposes of his love, and the engagements of his truth; while wicked men often escape suffering here, because they are kept to the day of judgment, to be punished with the devil and his angels.

10-16 Impure seducers and their abandoned followers, give themselves up to their own fleshly minds. Refusing to bring every thought to the obedience of Christ, they act against God's righteous precepts. They walk after the flesh, they go on in sinful courses, and increase to greater degrees of impurity and wickedness. They also despise those whom God has set in authority over them, and requires them to honour. Outward temporal good things are the wages sinners expect and promise themselves. And none have more cause to tremble, than those who are bold to gratify their sinful lusts, by presuming on the Divine grace and mercy. Many such there have been, and are, who speak lightly of the restraints of God's law, and deem themselves freed from obligations to obey it. Let Christians stand at a distance from such.

17-22 The word of truth is the water of life, which refreshes the souls that receive it; but deceivers spread and promote error, and are set forth as empty, because there is no truth in them. As clouds hinder the light of the sun, so do these darken counsel by words wherein there is no truth. Seeing that these men increase darkness in this world, it is very just that the mist ofdarkness should be their portion in the next. In the midst of their talk of liberty, these men are the vilest slaves; their own lusts gain a complete victory over them, and they are actually in bondage. When men are entangled, they are easily overcome; therefore Christians should keep close to the word of God, and watch against all who seek to bewilder them. A state of apostacy is worse than a state of ignorance. To bring an evil report upon the good way of God, and a false charge against the way of truth, must expose to the heaviest condemnation. How dreadful is the state here described! Yet though such a case is deplorable, it is not utterly hopeless; the leper may be made clean, and even the dead may be raised. Is thy backsliding a grief to thee? Believe in the Lord Jesus, and thou shalt be saved.

View All Discussusion for 2 Peter Chapter 2... 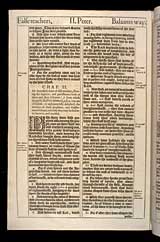