4 Came to king Demetrius in the hundreth and one and fiftieth yeere, presenting vnto him a crowne of golde, and a palme, and also of the boughes which were vsed solemnly in the Temple: and so that day he helde his peace.

5 Howbeit hauing gotten opportunity to further his foolish enterprise, and being called into counsel by Demetrius, & asked how the Iewes stood affected, and what they intēded, he answered therunto;

13 Cōmanding him to slay Iudas, & to scatter them that were wt him, & to make Alcimus high priest of the great Temple.

15 Now when the Iewes heard of Nicanors comming, and that the heathen were vp against them, they cast earth vpon their heads, and made supplication to him that had stablished his people for euer, and who alwayes helpeth his portion with manifestation of his presence.

25 He praied him also to take a wife, and to beget children: so he maried, was quiet, and tooke part of this life.

33 Hee stretched out his right hand toward the Temple, & made an oath in this maner: If you wil not deliuer me Iudas as a prisoner, I will lay this Temple of God euen with the ground, and I will breake downe the Altar, and erect a notable temple vnto Bacchus.

40 For he thought by taking him to do the Iewes much hurt.

View All Discussusion for 2 Maccabees Chapter 14... 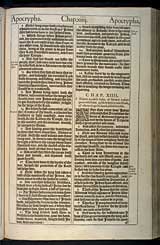