1 And Elisha the Prophet called one of the children of the Prophets, and said vnto him, Gird vp thy loines, and take this boxe of oile in thine hand, and goe to Ramoth Gilead.

2 And when thou commest thither, looke out there Iehu the sonne of Iehoshaphat, the sonne of Nimshi, and goe in, and make him arise vp from among his brethren, and carie him to an inner chamber.

3 Then take the boxe of oile, and powre it on his head, and say, Thus saith the Lord, I haue anointed thee king ouer Israel: then open the doore, and flee, and tary not.

5 And when hee came, behold, the captaines of the host were sitting; and hee said, I haue an errand to thee, O captaine: And Iehu said, Unto which of all vs? And he said, To thee, O captaine.

6 And hee arose, and went into the house, and hee powred the oyle on his head, and said vnto him, Thus sayth the Lord God of Israel, I haue anoynted thee king ouer the people of the Lord, euen ouer Israel.

7 And thou shalt smite the house of Ahab thy master, that I may auenge the blood of my seruants the Prophets, and the blood of all the seruants of the Lord, at the hand of Iezebel.

8 For the whole house of Ahab shal perish, and I will cut off from Ahab, him that pisseth against the wall, and him that is shut vp and left in Israel.

10 And the dogges shal eate Iezebel in the portion of Iezreel, and there shal be none to burie her. And he opened the doore, and fled.

11 ¶ Then Iehu came foorth to the seruants of his lord, and one said vnto him, Is all well? wherefore came this madde fellow to thee? And he said vnto them, Yee know the man, and his communication.

12 And they said, It is false, tell vs now: And hee sayde, Thus and thus spake he to me, saying, Thus saith the Lord, I haue anoynted thee King ouer Israel.

13 Then they hasted, and tooke euery man his garment, and put it vnder him on the top of the staires, and blewe with trumpets, saying, Iehu is king.

14 So Iehu the sonne of Iehoshaphat, the sonne of Nimshi, conspired against Ioram: (now Ioram had kept Ramoth Gilead, hee, and all Israel, because of Hazael king of Syria:

15 But king Ioram was returned to bee healed in Iezreel, of the wounds which the Syrians had giuen him, when he fought with Hazael king of Syria.) And Iehu said, If it be your minds, then let none goe forth nor escape out of the citie, to goe to tell it in Iezreel.

16 So Iehu rode in a charet, and went to Iezreel, (for Ioram lay there:) and Ahaziah king of Iudah was come downe to see Ioram.

17 And there stood a watchman on the towre in Iezreel, and hee spied the company of Iehu as he came, and said, I see a companie. And Ioram sayd, Take an horseman, and send to meete them, and let him say, Is it peace?

18 So there went one on horsebacke to meete him, and said, Thus sayth the king, Is it peace? And Iehu said, What hast thou to doe with peace? turne thee behinde me. And the watchman tolde, saying, The messenger came to them, but he commeth not againe.

19 Then he sent out a second on horsebacke, which came to them, and sayd, Thus sayth the king, Is it peace? And Iehu answered, What hast thou to doe with peace? turne thee behinde me.

20 And the watchman tolde, saying, He came euen vnto them, and commeth not againe: and the driuing is like the driuing of Iehu the sonne of Nimshi; for he driueth furiously.

21 And Ioram said, Make readie. And his charet was made ready. And Ioram king of Israel, and Ahaziah king of Iudah, went out, each in his charet, and they went out against Iehu, and met him in the portion of Naboth the Iezreelite.

22 And it came to passe when Ioram saw Iehu, that hee said, Is it peace, Iehu? And he answered, What peace, so long as the whoredomes of thy mother Iezebel, and her witchcrafts are so many?

23 And Ioram turned his hand, and fled, and said to Ahaziah, There is treachery, O Ahaziah.

24 And Iehu drew a bowe with his full strength, and smote Iehoram betweene his armes, and the arrow went out at his heart, and hee sunke downe in his charet.

25 Then said Iehu to Bidkar his captaine, Take vp, and cast him in the portion of the field of Naboth the Iezreelite: for remember, how that when I and thou rode together after Ahab his father, the Lord laide this burden vpon him:

26 Surely I haue seene yesterday the blood of Naboth, and the blood of his sonnes, sayd the Lord, and I will requite thee in this plat, sayth the Lord. Now therefore take and cast him into the plat of ground, according to the word of the Lord.

27 ¶ But when Ahaziah the king of Iudah saw this, hee fled by the way of the garden house: and Iehu followed after him, and said, Smite him also in the charet; and they did so, at the going vp to Gur, which is by Ibleam: And hee fled to Megiddo, and died there.

28 And his seruants caried him in a charet to Ierusalem, and buried him in his sepulchre with his fathers, in the citie of Dauid.

29 And in the eleuenth yeere of Ioram the sonne of Ahab, began Ahaziah to reigne ouer Iudah.

30 ¶ And when Iehu was come to Iezreel, Iezebel heard of it, and shee painted her face, and tyred her head, and looked out at a window.

31 And as Iehu entred in at the gate, she said, Had Zimri peace, who slew his master?

32 And he lift vp his face to the window, and said, Who is on my side, who? And there looked out to him two or three Eunuches.

33 And he said, Throw her downe. So they threw her downe, and some of her blood was sprinkled on the wall, and on the horses: and he trode her vnder foote.

34 And when he was come in, hee did eate and drinke, and saide, Goe, see now this cursed woman, and burie her: for she is a kings daughter.

35 And they went to burie her, but they found no more of her then the skul, and the feete, & the palmes of her hands.

36 Wherefore they came againe, and told him: and he said, This is the word of the Lord, which he spake by his seruant Elijah the Tishbite, saying, In the portion of Iezreel shall dogs eate the flesh of Iezebel:

37 And the carkeise of Iezebel shall be as doung vpon the face of the field in the portion of Iezreel, so that they shall not say, This is Iezebel.

Elisha sends to anoint Jehu. (1-10) Jehu and the captains. (11-15) Joram and Ahaziah slain by Jehu. (16-29) Jezebel eaten by dogs. (30-37)1-10 In these and the like events, we must acknowledge the secret working of God, disposing men to fulfil his purposes respecting them. Jehu was anointed king over Israel, by the Lord's special choice. The Lord still had a remnant of his people, and would yet preserve his worship among them. Of this Jehu was reminded. He was commanded to destroy the house of Ahab, and, as far as he acted in obedience to God, and upon right principles, he needed not to regard reproach or opposition. The murder of God's prophets is strongly noticed. Jezebel persisted in idolatry and enmity to Jehovah and his servants, and her iniquity was now full.

11-15 Those who faithfully deliver the Lord's message to sinners, have in all ages been treated as madmen. Their judgment, speech, and conduct are contrary to those of other men; they endure much in pursuit of objects, and are influenced by motives, into which the others cannot enter. But above all, the charge is brought by the worldly and ungodly of all sorts, who are mad indeed; while the principles and practice of the devoted servants of God, prove to be wise and reasonable. Some faith in the word of God, seems to have animated Jehu to this undertaking.

16-29 Jehu was a man of eager spirit. The wisdom of God is seen in the choice of those employed in his work. But it is not for any man's reputation to be known by his fury. He that has rule over his own spirit, is better than the mighty. Joram met Jehu in the portion of Naboth. The circumstances of events are sometimes ordered by Divine Providence to make the punishment answer to the sin, as face answers to face in a glass. The way of sin can never be the way of peace, #Isa 57:21|. What peace can sinners have with God? No peace so long as sin is persisted in; but when it is repented of and forsaken, there is peace. Joram died as a criminal, under the sentence of the law. Ahaziah was joined with the house of Ahab. He was one of them; he had made himself so by sin. It is dangerous to join evil-doers; we shall be entangled in guilt and misery by it.

30-37 Instead of hiding herself, as one afraid of Divine vengeance, Jezebel mocked at fear. See how a heart, hardened against God, will brave it out to the last. There is not a surer presage of ruin, than an unhumbled heart under humbling providences. Let those look at Jezebel's conduct and fate, who use arts to seduce others to commit wickedness, and to draw them aside from the ways of truth and righteousness. Jehu called for aid against Jezebel. When reformation-work is on foot, it is time to ask, Who sides with it? Her attendants delivered her up. Thus she was put to death. See the end of pride and cruelty, and say, The Lord is righteous. When we pamper our bodies, let us think how vile they are; shortly they will be a feast for worms under ground, or beasts above ground. May we all flee from that wrath which is revealed from heaven, against all ungodliness and unrighteousness of men.

View All Discussusion for 2 Kings Chapter 9... 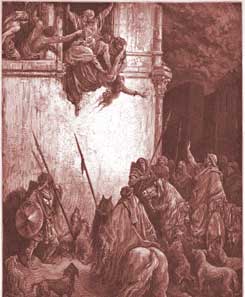 The Death of Jezebel 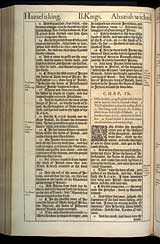