1 Then spake Elisha vnto the woman ( whose sonne he had restored to life) saying, Arise, and goe thou and thine housholde, and soiourne whersoeuer thou canst soiourne: for the Lord hath called for a famin, and it shall also come vpon the land seuen yeeres.

2 And the woman arose, and did after the saying of the man of God: and she went with her housholde, and soiourned in the land of the Philistines seuen yeeres.

3 And it came to passe at the seuen yeeres ende, that the woman returned out of the land of the Philistines: and she went foorth to crie vnto the king for her house, and for her land.

4 And the king talked with Gehazi the seruant of the man of God, saying, Tell mee, I pray thee, all the great things that Elisha hath done.

6 And when the king asked the woman, shee tolde him. So the King appointed vnto her a certaine officer, saying, Restore all that was hers, and all the fruites of the field, since the day that she left the land, euen till now.

7 ¶ And Elisha came to Damascus, and Benhadad the king of Syria was sicke, and it was tolde him, saying, The man of God is come hither.

8 And the king said vnto Hazael, Take a present in thine hand, and goe meete the man of God, and enquire of the Lord by him, saying, Shall I recouer of this disease?

9 So Hazael went to meete him, and tooke a present with him, euen of euery good thing of Damascus, fourtie camels burden, and came, and stood before him, and said, Thy sonne Benhadad king of Syria hath sent me to thee, saying, Shall I recouer of this disease?

10 And Elisha said vnto him, Goe, say vnto him, Thou mayest certeinly recouer: howbeit, the Lord hath shewed me, that he shall surely die.

11 And hee setled his countenance stedfastly, vntill he was ashamed: and the man of God wept.

12 And Hazael said, Why weepeth my lord? And he answered, Because I know the euill that thou wilt doe vnto the children of Israel: their strong holds wilt thou set on fire, and their young men wilt thou slay with the sword, and wilt dash their children, and rip vp their women with childe.

13 And Hazael said, But what, is thy seruant a dogge, that he should doe this great thing? And Elisha answered, The Lord hath shewed mee that thou shalt be king ouer Syria.

14 So he departed from Elisha, and came to his master, who saide to him, What said Elisha to thee? and hee answered, He told me that thou shouldst surely recouer.

15 And it came to passe on the morrow, that he tooke a thicke cloth, and dipt it in water, and spread it on his face, so that he died, and Hazael reigned in his stead.

17 Thirtie and two yeeres old was he when he began to reigne, and hee reigned eight yeeres in Ierusalem.

18 And he walked in the way of the kings of Israel, as did the house of Ahab: for the daughter of Ahab was his wife, and hee did euill in the sight of the Lord.

19 Yet the Lord would not destroy Iudah, for Dauid his seruants sake, as hee promised to giue to him alway a light, and to his children.

20 ¶ In his dayes Edom reuolted from vnder the hand of Iudah, and made a king ouer themselues.

21 So Ioram went ouer to Zair, and all the charets with him, and hee rose by night, and smote the Edomites, which compassed him about: and the captaines of the charets, and the people fled into their tents.

22 Yet Edom reuolted from vnder the hand of Iudah vnto this day. Then Libnah reuolted at the same time.

23 And the rest of the actes of Ioram, and all that hee did, are they not written in the booke of the Chronicles of the kings of Iudah?

25 ¶ In the twelfth yeere of Ioram the sonne of Ahab, king of Israel, did Ahaziah, the sonne of Iehoram king of Iudah, begin to reigne.

26 Two and twentie yeeres old was Ahaziah when he began to reigne, and he reigned one yeere in Ierusalem, and his mothers name was Athaliah the daughter of Omri king of Israel.

28 ¶ And he went with Ioram the sonne of Ahab, to the warre against Hazael king of Syria in Ramoth Gilead, and the Syrians wounded Ioram.

29 And king Ioram went backe to be healed in Iezreel, of the woundes which the Syrians had giuen him at Ramah, when hee fought against Hazael king of Syria: And Ahaziah the son of Iehoram king of Iudah, went downe to see Ioram the sonne of Ahab in Iezreel, because he was sicke.

A famine in Israel, The Shunammite obtains her land. (1-6) Elisha consulted by Hazael, Death of Benhadad. (7-15) Jehoram's wicked reign in Judah. (16-24) Ahaziah's wicked reign in Judah. (25-29)1-6 The kindness of the good Shunammite to Elisha, was rewarded by the care taken of her in famine. It is well to foresee an evil, and wisdom, when we foresee it, to hide ourselves if we lawfully may do so. When the famine was over, she returned out of the land of the Philistines; that was no proper place for an Israelite, any longer than there was necessity for it. Time was when she dwelt so securely among her own people, that she had no occasion to be spoken for to the king; but there is much uncertainty in this life, so that things or persons may fail us which we most depend upon, and those befriend us which we think we shall never need. Sometimes events, small in themselves, prove of consequence, as here; for they made the king ready to believe Gehazi's narrative, when thus confirmed. It made him ready to grant her request, and to support a life which was given once and again by miracle.

7-15 Among other changes of men's minds by affliction, it often gives other thoughts of God's ministers, and teaches to value the counsels and prayers of those whom they have hated and despised. It was not in Hazael's countenance that Elisha read what he would do, but God revealed it to him, and it fetched tears from his eyes: the more foresight men have, the more grief they are liable to. It is possible for a man, under the convictions and restraints of natural conscience, to express great abhorrence of a sin, yet afterwards to be reconciled to it. Those that are little and low in the world, cannot imagine how strong the temptations of power and prosperity are, which, if ever they arrive at, they will find how deceitful their hearts are, how much worse than they suspected. The devil ruins men, by saying they shall certainly recover and do well, so rocking them asleep in security. Hazael's false account was an injury to the king, who lost the benefit of the prophet's warning to prepare for death, and an injury to Elisha, who would be counted a false prophet. It is not certain that Hazael murdered his master, or if he caused his death it may have been without any design. But he was a dissembler, and afterwards proved a persecutor to Israel.

16-24 A general idea is given of Jehoram's badness. His father, no doubt, had him taught the true knowledge of the Lord, but did ill to marry him to the daughter of Ahab; no good could come of union with an idolatrous family.

25-29 Names do not make natures, but it was bad for Jehoshaphat's family to borrow names from Ahab's. Ahaziah's relation to Ahab's family was the occasion of his wickedness and of his fall. When men choose wives for themselves, let them remember they are choosing mothers for their children. Providence so ordered it, that Ahaziah might be cut off with the house of Ahab, when the measure of their iniquity was full. Those who partake with sinners in their sin, must expect to partake with them in their plagues. May all the changes, troubles, and wickedness of the world, make us more earnest to obtain an interest in the salvation of Christ.

View All Discussusion for 2 Kings Chapter 8... 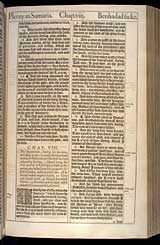