1 Then Elisha said, Heare yee the word of the Lord, Thus saith the Lord, To morrowe about this time shal a measure of fine flower be sold for a shekell, and two measures of barley for a shekel, in the gate of Samaria.

2 Then a lord on whose hand the king leaned, answered the man of God, and said, Behold, if the Lord would make windowes in heauen, might this thing bee? and he saide, Behold, thou shalt see it with thine eies, but shalt not eate thereof.

3 ¶ And there were foure leprous men at the entring in of the gate: and they saide one to another, Why sit wee here vntill we die?

4 If we say, We will enter into the citie, then the famine is in the citie, and wee shall die there: and if we sit still here, we die also. Now therefore come, and let vs fall vnto the host of the Syrians: if they saue vs aliue, we shall liue; and if they kill vs, we shall but die.

5 And they rose vp in the twilight, to goe vnto the campe of the Syrians: and when they were come to the vttermost part of the campe of Syria, behold, there was no man there.

6 For the Lord had made the host of the Syrians to heare a noise of charets, and a noise of horses, euen the noise of a great host: and they said one to another, Loe, the king of Israel hath hired against vs the kings of the Hittites, and the kings of the Egyptians, to come vpon vs.

7 Wherefore they arose and fled in the twilight, and left their tents, and their horses, and their asses, euen the campe as it was, and fled for their life.

9 Then they said one to another, We doe not well: this day is a day of good tydings, and we hold our peace: if we tarie till the morning light, some mischiefe will come vpon vs: nowe therefore come, that we may goe, and tell the kings houshold.

10 So they came, and called vnto the porter of the citie: and they told them, saying; We came to the campe of the Syrians, and behold, there was no man there, neither voice of man, but horses tyed, and asses tyed, and the tents as they were.

11 And hee called the porters, and they told it to the kings house within.

12 ¶ And the king arose in the night, and said vnto his seruants, I will now shew you what the Syrians haue done to vs: They know that we be hungrie, therefore are they gone out of the camp, to hide themselues in the field, saying; When they come out of the citie, we shal catch them aliue, and get into the citie.

14 They tooke therefore two charet horses, and the king sent after the hoste of the Syrians, saying, Goe, and see.

15 And they went after them vnto Iordane, and loe, all the way was full of garments, and vessels, which the Syrians had cast away in their haste: and the messengers returned, and told the king.

16 And the people went out, and spoiled the tents of the Syrians: So a measure of fine flowre was sold for a shekell, and two measures of barley for a shekel, according to the word of the Lord.

17 ¶ And the king appointed the lord on whose hand he leaned, to haue the charge of the gate: and the people trode vpon him in the gate, and he died, as the man of God had said, who spake when the king came downe to him.

18 And it came to passe, as the man of God had spoken to the king, saying, Two measures of barley for a shekel, and a measure of fine flowre for a shekel, shalbe to morrow about this time, in the gate of Samaria:

19 And that lord answered the man of God, and said, Now behold, if the Lord should make windowes in heauen, might such a thing be? And he said, Behold, thou shalt see it with thine eyes, but shalt not eate thereof.

20 And so it fell out vnto him: for the people trode vpon him in the gate, and he died.

Elisha prophesies plenty. (1,2) The flight of the Syrian army. (3-11) Samaria plentifully supplied. (12-20)1,2 Man's extremity is God's opportunity of making his own power to be glorious: his time to appear for his people is when their strength is gone. Unbelief is a sin by which men greatly dishonour and displease God, and deprive themselves of the favours he designed for them. Such will be the portion of those that believe not the promise of eternal life; they shall see it at a distance, but shall never taste of it. But no temporal deliverances and mercies will in the end profit sinners, unless they are led to repentance by the goodness of God.

3-11 God can, when he pleases, make the stoutest heart to tremble; and as for those who will not fear God, he can make them fear at the shaking of a leaf. Providence ordered it, that the lepers came as soon as the Syrians were fled. Their consciences told them that mischief would befall them, if they took care of themselves only. Natural humanity, and fear of punishment, are powerful checks on the selfishness of the ungodly. These feelings tend to preserve order and kindness in the world; but they who have found the unsearchable riches of Christ, will not long delay to report the good tidings to others. From love to him, not from selfish feelings, they will gladly share their earthly good things with their brethren.

12-20 Here see the wants of Israel supplied in a way they little thought of, which should encourage us to depend upon the power and goodness of God in our greatest straits. God's promise may be safely relied on, for no word of his shall fall to the ground. The nobleman that questioned the truth of Elisha's word, saw the plenty, to silence and shame his unbelief, and therein saw his own folly; but he did not eat of the plenty he saw. Justly do those find the world's promises fail them, who think that the promises of God will disappoint them. Learn how deeply God resents distrust of his power, providence, and promise: how uncertain life is, and the enjoyments of it: how certain God's threatenings are, and how sure to come on the guilty. May God help us to inquire whether we are exposed to his threatenings, or interested in his promises.

View All Discussusion for 2 Kings Chapter 7... 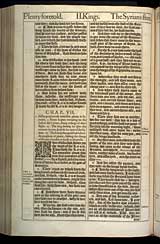