1 And it came to passe (at the end of twentie yeeres, wherein Solomon had built the house of the Lord, & his own house)

2 That the cities which Huram had restored to Solomon, Solomon built them, and caused the children of Israel to dwell there.

3 And Solomon went to Hamath Zobah, and preuailed against it.

4 And he built Tadmor in the wildernesse, and all the store-cities, which he built in Hamath.

8 But of their children, who were left after them in the land, whom the children of Israel consumed not; them did Solomon make to pay tribute, vntill this day.

9 But of the children of Israel did Solomon make no seruants for his worke: but they were men of warre, and chiefe of his captains, and captains of his charets and horsemen.

10 And these were the chiefe of king Solomons officers, euen two hundred and fifty, that bare rule ouer the people.

11 ¶ And Solomon brought vp the daughter of Pharaoh out of the citie of Dauid, vnto the house that he had built for her: for hee said, My wife shall not dwell in the house of Dauid king of Israel, because the places are holy, whereunto the Arke of the Lord hath come.

12 ¶ Then Solomon offered burnt offerings vnto the Lord on the Altar of the Lord, which he had built before the porch:

14 ¶ And he appointed, according to the order of Dauid his father, the courses of the Priests to their seruice, and the Leuites to their charges, to praise and minister before the Priests, as the duety of euery day required: the porters also by their courses, at euery gate: for so had Dauid the man of God commanded.

15 And they departed not from the commandement of the King vnto the Priests and Leuites, concerning any matter, or concerning the treasures.

16 Now all the worke of Solomon was prepared vnto the day of the foundation of the house of the Lord, and vntill it was finished: so the house of God was perfected.

17 ¶ Then went Solomon to Ezion Geber, and to Eloth, at the sea side in the land of Edom.

18 And Huram sent him by the hands of his seruants, shippes, and seruants that had knowledge of the sea; and they went with the seruants of Solomon to Ophir, and tooke thence foure hundred and fiftie talents of golde, and brought them to king Solomon.

- It sometimes requires more wisdom and resolution to govern a family in the fear of God, than to govern a kingdom with reputation. The difficulty is increased, when a man has a hinderance instead of a help meet in the wife of his bosom. Solomon kept up the holy sacrifices, according to the law of Moses. In vain had the altar been built, in vain had fire come down from heaven, if sacrifices had not been constantly brought. Spiritual sacrifices are required of us, which we are to bring daily and weekly; it is good to be in a settled method of devotion. When the service of the temple was put into good order, it is said, The house of the Lord was perfected. The work was the main matter, not the place; the temple was unfinished till all this was done. Canaan was a rich country, and yet must send to Ophir for gold The Israelites were a wise people, but must be beholden to the king of Tyre for men that had knowledge of the seas. Grace, and not gold, is the best riches, and acquaintance with God and his law, the best knowledge. Leaving the children of this world to scramble for the toys of this world, may we, as the children of God, lay up our treasure in heaven, that where our treasure is, our hearts also may be.

View All Discussusion for 2 Chronicles Chapter 8... 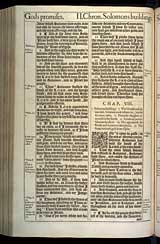