2 ¶ Also he made a molten Sea of ten cubites, from brim to brim, round in compasse, and fiue cubites the height thereof, and a line of thirtie cubites did compasse it round about.

3 And vnder it was the similitude of oxen, which did compasse it round about: tenne in a cubite compassing the Sea round about. Two rowes of oxen were cast, when it was cast.

5 And the thicknes of it was an hand breadth, & the brim of it like the worke of the brim of a cup, with flowers of Lillies: and it receiued and held three thousand baths.

6 ¶ He made also ten Lauers, and put fiue on the right hand, and fiue on the left, to wash in them: such things as they offered for the burnt offring, they washed in them, but the Sea was for the Priests to wash in.

7 And hee made ten candlesticks of gold according to their forme, and set them in the Temple, fiue on the right hand, and fiue on the left.

8 He made also ten tables, and placed them in the Temple, fiue on the right side, and fiue on the left: and hee made an hundred basens of gold.

9 ¶ Furthermore, hee made the court of the Priests, and the great court, and doores for the court, and ouerlayd the doores of them with brasse.

10 And he set the Sea on the rightside of the East end, ouer against the South.

11 And Huram made the pots, and the shouels, and the basens, and Huram finished the worke that he was to make for King Solomon for the house of God:

13 And foure hundred Pomegranats on the two wreathes: two rowes of Pomegranats on each wreath, to couer the two pommels of the chapiters, which were vpon the pillars.

14 He made also bases; and lauers made he vpon the bases.

16 The pots also, and the shouels, and the fleshhookes, and all their instruments, did Huram his father make to King Solomon for the house of the Lord, of bright brasse.

17 In the plaine of Iordan did the King cast them, in the clay-ground, betweene Succoth and Zeredathah.

18 Thus Solomon made all these vessels in great abundance: for the weight of the brasse could not be found out.

19 ¶ And Solomon made all the vessels, that were for the house of God, the golden Altar also, and the tables whereon the Shew-bread was set.

20 Moreouer the candlesticks with their lampes, that they should burne after the maner, before the Oracle, of pure gold:

21 And the flowers, and the lamps, and the tongs made he of golde, and that perfect gold.

22 And the snuffers, and the basens, and the spoones, and the censers, of pure gold. And the entry of the house, the inner doores thereof for the most Holy place, and the doores of the house of the Temple, were of gold.

The furniture of the temple.

- Here is a further account of the furniture of God's house. Both without doors and within, there was that which typified the grace of the gospel, and shadowed out good things to come, of which the substance is Christ. There was the brazen altar. The making of this was not mentioned in the book of Kings. On this all the sacrifices were offered, and it sanctified the gift. The people who worshipped in the courts might see the sacrifices burned. They might thus be led to consider the great Sacrifice, to be offered in the fulness of time, to take away sin, and put an end to death, which the blood of bulls and goats could not possibly do. And, with the smoke of the sacrifices, their hearts might ascend to heaven, in holy desires towards God and his favour. In all our devotions we must keep the eye of faith fixed upon Christ. The furniture of the temple, compared with that of the tabernacle, showed that God's church would be enlarged, and his worshippers multiplied. Blessed be God, there is enough in Christ for all.

View All Discussusion for 2 Chronicles Chapter 4... 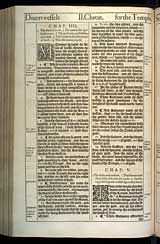