1 Iosiah was eight yeeres old when hee beganne to reigne, and he reigned in Ierusalem one and thirty yeeres.

2 And he did that which was right in the sight of the Lord, and walked in the wayes of Dauid his father, and declined neither to the right hand nor to the left.

3 ¶ For in the eight yeare of his reigne, while he was yet young, hee beganne to seeke after the God of Dauid his father: and in the twelfth yeere hee beganne to purge Iudah and Ierusalem from the high places and the groues, and the carued images, and the molten images.

4 And they brake downe the altars of Baalim in his presence, and the images that were on high aboue them, he cut downe, and the groues, and the carued images, and the molten images he brake in peeces, and made dust of them, and strowed it vpon the graues of them, that had sacrificed vnto them.

5 And hee burnt the bones of the priests vpon their altars, and cleansed Iudah and Ierusalem.

6 And so did he in the cities of Manasseh, and Ephraim, and Simeon, euen vnto Naphtali, with their mattockes, round about.

7 And when he had broken downe the altars and the groues, and had beaten the grauen images into pouder, and cut downe all the idoles throughout all the land of Israel, hee returned to Ierusalem.

8 ¶ Now in the eighteenth yeere of his reigne, when hee had purged the land, and the house; he sent Shaphan the sonne of Azaliah, and Maasiah the gouernour of the citie, and Ioah the sonne of Ioahaz the recorder, to repaire the house of the Lord his God.

9 And when they came to Hilkiah the high priest, they deliuered the money that was brought into the house of God, which the Leuites that kept the doores, had gathered of the hand of Manasseh, and Ephraim, and of all the remnant of Israel, and of all Iudah, and Beniamin, and they returned to Ierusalem.

11 Euen to the artificers and builders gaue they it, to buy hewen stone, and timber for couplings, and to floore the houses, which the kings of Iudah had destroyed.

13 Also they were ouer the bearers of burdens, and were ouerseers of all that wrought the worke in any manner of seruice: and of the Leuites there were Scribes, and officers, and porters.

14 ¶ And when they brought out the money that was brought into the house of the Lord, Hilkiah the priest found a booke of the lawe of the Lord, giuen by Moses.

16 And Shaphan caried the booke to the king, and brought the king word backe againe, saying, All that was committed to thy seruants, they doe it.

18 Then Shaphan the scribe tolde the king, saying, Hilkiah the priest hath giuen me a booke. And Shaphan read it before the king.

19 And it came to passe when the king had heard the words of the lawe, that he rent his clothes.

20 And the king commanded Hilkiah, and Ahikam the sonne of Shaphan, and Abdon the sonne of Mirah, and Shaphan the scribe, and Asaiah a seruant of the kings, saying,

21 Goe, enquire of the Lord for me, and for them that are left in Israel and in Iudah, concerning the wordes of the booke that is found: for great is the wrath of the Lord that is powred out vpon vs, because our fathers haue not kept the word of the Lord, to doe after all that is written in this booke.

22 And Hilkiah and they that the king had appointed went to Huldah the prophetesse, the wife of Shallum the sonne of Tikuath, the sonne of Hasrah, keeper of the wardrobe (now she dwelt in Ierusalem in the colledge,) and they spake to her to that effect.

23 ¶ And she answered them, Thus saith the Lord God of Israel: Tell ye the man that sent you to me,

24 Thus saith the Lord, behold, I will bring euill vpon this place, and vpon the inhabitants thereof, euen all the curses that are written in the booke which they haue read before the king of Iudah:

25 Because they haue forsaken mee, and haue burned incense vnto other gods, that they might prouoke mee to anger with all the workes of their hands, therefore my wrath shall bee powred out vpon this place, and shall not be quenched.

26 And as for the king of Iudah, who sent you to enquire of the Lord, so shal ye say vnto him: Thus saith the Lord God of Israel, concerning the words which thou hast heard:

28 Behold, I will gather thee to thy fathers, and thou shalt bee gathered to thy graue in peace, neither shall thine eyes see all the euill that I will bring vpon this place, and vpon the inhabitants of the same. So they brought the king word againe.

29 ¶ Then the king sent, and gathered together all the Elders of Iudah and Ierusalem.

31 And the King stood in his place, & made a Couenant before the Lord, to walke after the Lord, and to keep his Commandements, and his Testimonies, and his Statutes, with all his heart, & with all his soule, to performe the words of the Couenant which are written in this booke.

32 And he caused all that were present in Ierusalem and Beniamin, to stand to it. And the inhabitants of Ierusalem did according to the couenant of God, the God of their fathers.

33 And Iosiah tooke away all the abominations out of all the countreys that perteined to the children of Israel, and made all that were present in Israel to serue, euen to serue the Lord their God. And all his dayes they departed not from folowing the Lord the God of their fathers.

- As the years of infancy cannot be useful to our fellow-creatures, our earliest youth should be dedicated to God, that we may not waste any of the remaining short space of life. Happy and wise are those who seek the Lord and prepare for usefulness at an early age, when others are pursuing sinful pleasures, contracting bad habits, and forming ruinous connexions. Who can express the anguish prevented by early piety, and its blessed effects? Diligent self-examination and watchfulness will convince us of the deceitfulness and wickedness of our own hearts, and the sinfulness of our lives. We are here encouraged to humble ourselves before God, and to seek unto him, as Josiah did. And believers are here taught, not to fear death, but to welcome it, when it takes them away from the evil to come. Nothing hastens the ruin of a people, nor ripens them for it, more than their disregard of the attempts made for their reformation. Be not deceived, God is not mocked. The current and tide of affections only turns at the command of Him who raises up those that are dead in trespasses and sins. We behold peculiar loveliness, in the grace the Lord bestows on those, who in tender years seek to know and to love the Saviour. Hath Jesus, the Day-spring from on high, visited you? Can you trace your knowledge of this light and life of man, like Josiah, from your youth? Oh the unspeakable happiness of becoming acquainted with Jesus from our earliest years!

View All Discussusion for 2 Chronicles Chapter 34... 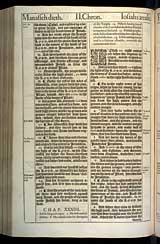