2 And hee did that which was right in the sight of the Lord, according to all that Dauid his father had done.

4 And hee brought in the Priests, and the Leuites, and gathered them together into the East street,

5 And said vnto them, Heare me, ye Leuites, sanctifie now your selues, and sanctifie the house of the Lord God of your fathers, and cary foorth the filthinesse out of the holy place.

6 For our fathers haue trespassed, and done that which was euill in the eyes of the Lord our God, and haue forsaken him, and haue turned away their faces from the habitation of the Lord, and turned their backs.

7 Also they haue shut vp the doores of the Porch, and put out the lampes, and haue not burnt incense, nor offered burnt offerings in the holy place, vnto the God of Israel.

8 Wherfore the wrath of the Lord was vpon Iudah and Ierusalem, and he hath deliuered them to trouble, to astonishment, and to hissing, as yee see with your eyes.

9 For loe, our fathers haue fallen by the sword, and our sonnes and our daughters, and our wiues, are in captiuitie for this.

10 Now it is in mine heart to make a couenant with the Lord God of Israel, that his fierce wrath may turne away from vs.

11 My sonnes, bee not now negligent: for the Lord hath chosen you to stand before him, to serue him, and that you should minister vnto him, and burne incense.

15 And they gathered their brethren, and sanctified themselues, and came according to the commandement of the king, by the words of the Lord, to cleanse the house of the Lord.

19 Moreouer all the vessels which king Ahaz in his reigne did cast away in his transgression, haue we prepared and sanctified, and behold, they are before the altar of the Lord.

20 ¶ Then Hezekiah the king rose earely, and gathered the rulers of the citie, and went vp to the house of the Lord.

21 And they brought seuen bullocks and seuen rammes, and seuen lambes, and seuen hee goats for a sinne offring for the kingdome, and for the Sanctuarie, and for Iudah: and he commaunded the priests the sonnes of Aaron to offer them on the Altar of the Lord.

23 And they brought foorth the hee goats for the sinne offering, before the king and the congregation, and laide their hands vpon them:

24 And the priests killed them, and they made reconciliation with their blood vpon the altar, to make an atonement for all Israel: for the king commanded that the burnt offring and the sin offering should be made for all Israel.

26 And the Leuites stood with the instruments of Dauid, and the priestes with the trumpets.

28 And all the congregation worshipped, and the singers sang, and the trumpetters sounded: and all this continued vntill the burnt offering was finished.

29 And when they had made an end of offering, the king and all that were present with him, bowed themselues and worshipped.

30 Moreouer Hezekiah the king and the Princes, commanded the Leuites to sing praise vnto the Lord, with the words of Dauid, and of Asaph the Seer: and they sang praises with gladnes, and they bowed their heads and worshipped.

31 Then Hezekiah answered and said, Now ye haue consecrated your selues vnto the Lord: come neere and bring sacrifices, and thanke-offerings into the house of the Lord. And the congregation brought in sacrifices, and thank-offrings, and as many as were of a free heart, burnt offerings.

32 And the number of the burnt offerings which the congregation brought, was threescore and ten bullockes, an hundred rammes, and two hundred lambs: all these were for a burnt offring to the Lord.

33 And the consecrated things were, sixe hundred oxen, and three thousand sheepe.

34 But the Priests were too few, so that they could not flay all the burnt offerings: wherefore their brethren the Leuites did helpe them, till the worke was ended, and vntill the other Priestes had sanctified themselues: for the Leuites were more vpright in heart, to sanctifie themselues, then the Priests.

35 And also the burnt offerings were in abundance, with the fat of the peace offerings, & the drinke offrings, for euery burnt offering. So the seruice of the house of the Lord was set in order.

36 And Hezekiah reioyced, and all the people, that God had prepared the people: for the thing was done suddenly.

Hezekiah's good reign in Judah. (1-19) Hezekiah's sacrifice of atonement. (20-36)1-19 When Hezekiah came to the crown, he applied at once to work reform. Those who begin with God, begin at the right end of their work, and it will prosper accordingly. Those that turn their backs upon God's ordinances, may truly be said to forsake God himself. There are still such neglects, if the word be not duly read and opened, for that was signified by the lighting the lamps, and also if prayers and praise be not offered up, for that was signified by the burning incense. Neglect of God's worship was the cause of the calamities they had lain under. The Lord alone can prepare the heart of man for vital godliness: when much good is done in a little time, the glory must be ascribed to him; and all who love him or the souls of men, will rejoice therein. Let those that do good work, learn to do it well.

20-36 As soon as Hezekiah heard that the temple was ready, he lost no time. Atonement must be made for the sins of the last reign. It was not enough to lament and forsake those sins; they brought a sin-offering. Our repentance and reformation will not obtain pardon but in and through Christ, who was made sin, that is, a sin-offering for us. While the offerings were on the altar, the Levites sang. Sorrow for sin must not prevent us from praising God. The king and the congregation gave their consent to all that was done. It is not enough for us to be where God is worshipped, if we do not ourselves worship with the heart. And we should offer up our spiritual sacrifices of praise and thanksgiving, and devote ourselves and all we have, as sacrifices, acceptable to the Father only through the Redeemer.

View All Discussusion for 2 Chronicles Chapter 29... 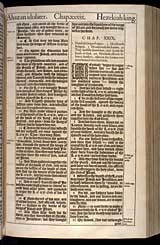