1 Ahaz was twentie yeeres olde when hee beganne to reigne, and he reigned sixteene yeres in Ierusalem: but hee did not that which was right in the sight of the Lord, like Dauid his father.

2 For he walked in the wayes of the Kings of Israel, and made also molten images for Baalim.

3 Moreouer, he burnt incense in the valley of the sonne of Hinnom, & burnt his children in the fire, after the abominations of the heathen, whome the Lord had cast out before the children of Israel.

4 Hee sacrificed also, and burnt incense in the high places, and on the hils, and vnder euery greene tree.

6 ¶ For Pekah the sonne of Remaliah slew in Iudah an hundred & twentie thousand in one day, which were all valiant men: because they had forsaken the Lord God of their fathers.

7 And Zichri a mightie man of Ephraim, slue Maaseiah the kings sonne, and Azrikam the gouernour of the house, and Elkanah that was next to the King.

8 And the children of Israel caried away captiue of their brethren, two hundred thousand, women, sonnes and daughters, and tooke also away much spoile from them, and brought the spoile to Samaria.

9 But a Prophet of the Lord was there, whose name was Oded: and hee went out before the hoste that came to Samaria, and said vnto them, Behold, because the Lord God of your fathers was wroth with Iudah, he hath deliuered them into your hand, and yee haue slaine them in a rage that reacheth vp vnto heauen.

10 And now ye purpose to keepe vnder the children of Iudah and Ierusalem for bondmen, and bondwomen vnto you: But are there not with you, euen with you, sinnes against the Lord your God?

11 Now heare me therefore, and deliuer the captiues againe, which ye haue taken captiue of your brethren: for the fierce wrath of God is vpon you.

13 And said vnto them, Ye shall not bring in the captiues hither: for whereas wee haue offended against the Lord already, ye intend to adde more to our sinnes and to our trespasse: for our trespasse is great, and there is fierce wrath against Israel.

14 So the armed men left the captiues, and the spoile before the Princes, and all the congregation.

15 And the men which were expressed by name, rose vp and tooke the captiues, and with the spoile clothed all that were naked among them, and arayed them, and shod them, and gaue them to eate and to drinke, and anointed them, and caried all the feeble of them vpon asses, and brought them to Iericho, the city of palme-trees, to their brethren: then they returned to Samaria.

16 ¶ At that time did king Ahaz send vnto the kings of Assyria to helpe him.

17 For againe the Edomites had come and smitten Iudah, and caried away captiues.

19 For the Lord brought Iudah low, because of Ahaz king of Israel; for he made Iudah naked, and transgressed sore against the Lord.

20 And Tilgath-Pilneser king of Assyria came vnto him, and distressed him, but strengthened him not.

22 ¶ And in the time of this distresse did hee trespasse yet more against the Lord: This is that king Ahaz.

23 For he sacrificed vnto the gods of Damascus, which smote him: and he said, Because the gods of the kings of Syria helpe them, therefore will I sacrifice to them, that they may helpe me: but they were the ruine of him, and of all Israel.

25 And in euery seuerall city of Iudah hee made high places to burne incense vnto other gods, and prouoked to anger the Lord God of his fathers.

26 ¶ Now the rest of his acts, and of all his wayes, first and last, behold, they are written in the booke of the kings of Iudah and Israel.

27 And Ahaz slept with his fathers, and they buried him in the citie, euen in Ierusalem: but they brought him not into the sepulchres of the kings of Israel: and Hezekiah his sonne reigned in his stead.

The wicked reign of Ahaz in Judah.

- Israel gained this victory because God was wroth with Judah, and made them the rod of his indignation. He reminds them of their own sins. It ill becomes sinners to be cruel. Could they hope for the mercy of God, if they neither showed mercy nor justice to their brethren? Let it be remembered, that every man is our neighbour, our brother, our fellow man, if not our fellow Christian. And no man who is acquainted with the word of God, need fear to maintain that slavery is against the law of love and the gospel of grace. Who can hold his brother in bondage, without breaking the rule of doing to others as he would they should do unto him? But when sinners are left to their own heart's lusts, they grow more desperate in wickedness. God commands them to release the prisoners, and they obeyed. The Lord brought Judah low. Those who will not humble themselves under the word of God, will justly be humbled by his judgments. It is often found, that wicked men themselves have no real affection for those that revolt to them, nor do they care to do them a kindness. This is that king Ahaz! that wretched man! Those are wicked and vile indeed, that are made worse by their afflictions, instead of being made better by them; who, in their distress, trespass yet more, and have their hearts more fully set in them to do evil. But no marvel that men's affections and devotions are misplaced, when they mistake the author of their trouble and of their help. The progress of wickedness and misery is often rapid; and it is awful to reflect upon a sinner's being driven away in his wickedness into the eternal world.

View All Discussusion for 2 Chronicles Chapter 28... 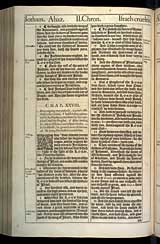