1 Iotham was twenty and fiue yeeres olde, when hee began to reigne, and hee reigned sixteene yeeres in Ierusalem: his mothers name also was Ierushah, the daughter of Zadok.

2 And he did that which was right in the sight of the Lord, according to all that his father Uzziah did: howbeit hee entred not into the temple of the Lord. And the people did yet corruptly.

3 He built the high gate of the house of the Lord, and on the wall of Ophel, he built much.

4 Moreouer hee built cities in the mountaines of Iudah, and in the forrests he built castles and towers.

6 So Iotham became mightie, because he prepared his wayes before the Lord his God.

7 ¶ Now the rest of the actes of Iotham and all his warres, and his wayes, lo, they are written in the booke of the Kings of Israel and Iudah.

8 Hee was fiue and twentie yeeres olde when he began to reigne, and reigned sixteene yeeres in Ierusalem.

9 ¶ And Iotham slept with his fathers, and they buried him in the city of Dauid: and Ahaz his sonne reigned in his stead.

- The people did corruptly. Perhaps Jotham was wanting towards the reformation of the land. Men may be very good, and yet not have courage and zeal to do what they might. It certainly casts blame upon the people. Jotham prospered, and became mighty. The more stedfast we are in religion, the more mighty we are, both to resist evil, and to do good. The Lord often removes wise and pious rulers, and sends others, whose follies and vices punish a people that valued not their mercies.

View All Discussusion for 2 Chronicles Chapter 27... 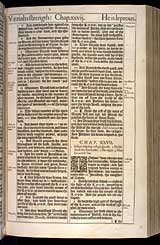