1 Then all the people of Iudah tooke Uzziah, who was sixteene yeeres old, and made him King in the roome of his father Amaziah.

2 He built Eloth, and restored it to Iudah: after that the King slept with his fathers.

3 Sixteene yeeres old was Uzziah, when he began to reigne, and he reigned fiftie and two yeeres in Ierusalem: his mothers name also was Iecoliah of Ierusalem.

4 And hee did that which was right in the sight of the Lord, according to all that his father Amaziah did.

5 And hee sought God in the dayes of Zechariah, who had vnderstanding in the visions of God: and as long as he sought the Lord, God made him to prosper.

7 And God helped him against the Philistines, and against the Arabians, that dwelt in Gur-baal, and the Mehunims.

8 And the Ammonites gaue gifts to Uzziah, and his name spread abroad euen to the entring in of Egypt: for hee strengthened himselfe exceedingly.

10 Also he built towers in the desert, and digged many welles, for hee had much cattell, both in the low countrey, and in the plaines: husbandmen also, and vine dressers in the mountaines, and in Carmel: for hee loued husbandrie.

11 Moreouer, Uzziah had an host of fighting men, that went out to warre by bands, according to the number of their account, by the hand of Ieiel the Scribe, and Maasiah the ruler, vnder the hand of Hananiah, one of the kings captaines.

12 The whole number of the chiefe of the fathers of the mightie men of valour, were two thousand and sixe hundred.

13 And vnder their hand was an armie, three hundred thousand, and seuen thousand, and fiue hundred, that made warre with mightie power, to helpe the king against the enemie.

14 And Uzziah prepared for them throughout all the hoste, shields, and speares, and helmets, and habergions, and bowes, and slings to cast stones.

15 And hee made in Ierusalem engines inuented by cunning men, to bee on the towers, & vpon the bulwarks, to shoote arrowes and great stones withall: and his name spread farre abroad, for he was marueilously helped, till he was strong.

16 ¶ But when he was strong, his heart was lifted vp to his destruction: for he transgressed against the Lord his God, and went into the temple of the Lord, to burne incense vpon the altar of incense.

17 And Azariah the priest went in after him, and with him fourescore priests of the Lord, that were valiant men.

18 And they withstood Uzziah the king, and said vnto him, It perteineth not vnto thee, Uzziah, to burne incense vnto the Lord, but to the priestes the sonnes of Aaron, that are consecrated to burne incense. Goe out of the Sanctuarie; for thou hast trespassed, neither shall it be for thine honour from the Lord God.

19 Then Uzziah was wroth, and had a censer in his hand, to burne incense, and while he was wroth with the priests, the leprosie euen rose vp in his forehead, before the priests, in the house of the Lord, from beside the incense altar.

20 And Azariah the chiefe priest, and all the priests looked vpon him, and behold, he was leprous in his forehead, and they thrust him out from thence, yea himselfe hasted also to goe out, because the Lord had smitten him.

21 And Uzziah the king was a leper vnto the day of his death, and dwelt in a seuerall house being a leper, for he was cut off from the house of the Lord: and Iotham his sonne was ouer the kings house, iudging the people of the land.

22 ¶ Now the rest of the actes of Uzziah first and last, did Isaiah the prophet the sonne of Amoz write.

23 So Uzziah slept with his fathers, and they buried him with his fathers in the field of the buriall which belonged to the kings: for they saide, He is a leper: And Iotham his sonne reigned in his stead.

Uzziah's good reign in Judah. (1-15) Uzziah's attempt to burn incense. (16-23)1-15 As long as Uzziah sought the Lord, and minded religion, God made him to prosper. Those only prosper whom God makes to prosper; for prosperity is his gift. Many have owned, that as long as they sought the Lord, and kept close to their duty, they prospered; but when they forsook God, every thing went cross. God never continues either to bless the indolent or to withhold his blessing from the diligent. He will never suffer any to seek his face in vain. Uzziah's name was famed throughout all the neighbouring countries. A name with God and good people makes truly honourable. He did not delight in war, nor addict himself to sports, but delighted in husbandry.

16-23 The transgression of the kings before Uzziah was, forsaking the temple of the Lord, and burning incense upon idolatrous altars. But his transgression was, going into the holy place, and attempting to burn incense upon the altar of God. See how hard it is to avoid one extreme, and not run into another. Pride of heart was at the bottom of his sin; a lust that ruins many. Instead of lifting up the name God in gratitude to him who had done so much for him, his heart was lifted up to his hurt. Men's pretending to forbidden knowledge, and seeking things too high for them, are owing to pride of heart. The incense of our prayers must be, by faith, put into the hands of our Lord Jesus, the great High Priest of our profession, else we cannot expect it to be accepted by God, #Re 8:3|. Though Uzziah strove with the priests, he would not strive with his Maker. But he was punished for his transgression; he continued a leper to his death, shut out from society. The punishment answered the sin as face to face in a glass. Pride was at the bottom of his transgression, and thus God humbled him, and put dishonour upon him. Those that covet forbidden honours, forfeit allowed ones. Adam, by catching at the tree of knowledge which he might not eat of, debarred himself of the tree of life which he might have eaten of. Let all that read say, The Lord is righteous. And when the Lord sees good to throw prosperous and useful men aside, as broken vessels, if he raises up others to fill their places, they may rejoice to renounce all worldly concerns, and employ their remaining days in preparation for death.

View All Discussusion for 2 Chronicles Chapter 26... 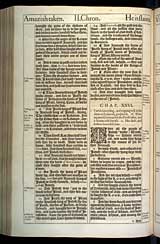