1 And the inhabitants of Ierusalem made Ahaziah his yongest sonne, king in his stead: for the band of men that came with the Arabians to the campe, had slaine all the eldest. So Ahaziah the sonne of Iehoram king of Iudah reigned.

2 Fourtie and two yeeres old was Ahaziah, when he began to reigne, and he reigned one yeere in Ierusalem: his mothers name also was Athaliah the daughter of Omri.

3 Hee also walked in the wayes of the house of Ahab: for his mother was his counseller to doe wickedly.

4 Wherefore he did euill in the sight of the Lord, like the house of Ahab: for they were his counsellers after the death of his father, to his destruction.

5 ¶ He walked also after their counsell, and went with Iehoram the sonne of Ahab king of Israel, to warre against Hazael king of Syria at Ramoth Gilead: and the Syrians smote Ioram.

7 And the destruction of Ahaziah was of God by comming to Ioram: For when he was come, hee went out with Iehoram against Iehu the sonne of Nimshi, whome the Lord had anointed to cut off the house of Ahab.

8 And it came to passe, that when Iehu was executing iudgement vpon the house of Ahab, and found the princes of Iudah, and the sonnes of the brethren of Ahaziah, that ministred to Ahaziah, he slew them.

9 And he sought Ahaziah: and they caught him (for he was hid in Samaria) and brought him to Iehu: and when they had slaine him, they buried him: because, said they, hee is the sonne of Iehoshaphat, who sought the Lord with all his heart. So the house of Ahaziah had no power to keepe still the kingdome.

10 ¶ But when Athaliah the mother of Ahaziah, sawe that her sonne was dead, shee arose, and destroyed all the seed royall of the house of Iudah.

12 And he was with them hid in the house of God sixe yeeres, and Athaliah reigned ouer the land.

The reign of Ahaziah, Athaliah destroys the royal family.

- The counsel of the ungodly ruins many young persons when they are setting out in the world. Ahaziah gave himself up to be led by evil men. Those who advise us to do wickedly, counsel us to our destruction; while they pretend to be friends, they are our worst enemies. See and dread the mischief of bad company. If not the infection, yet let the destruction be feared, #Re 18:4|. We have here, a wicked woman endeavouring to destroy the house of David, and a good woman preserving it. No word of God shall fall to the ground. The whole truth of the prophecies that the Messiah was to come from David, and thereby the salvation of the world, appeared to be now hung upon the brittle thread of the life of a single infant, to destroy whom was the interest of the reigning power. But God had purposed, and vain were the efforts of earth and hell.

View All Discussusion for 2 Chronicles Chapter 22... 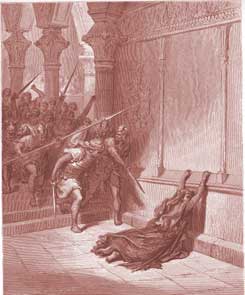 The Death of Athaliah 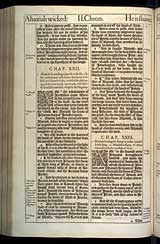