2 And Solomon told out threescore and tenne thousand men to beare burdens, and fourescore thousand to hewe in the mountaine, and three thousand and sixe hundred to ouersee them.

3 ¶ And Solomon sent to Huram the king of Tyre, saying, As thou diddest deale with Dauid my father, and diddest send him Cedars to builde him an house to dwell therein, euen so deale with me.

4 Behold, I build an house to the name of the Lord my God, to dedicate it to him, and to burne before him sweet incense, and for the continuall shew-bread, and for the burnt offrings morning and euening, on the Sabbaths, and on the new Moones, and on the solemne feasts of the Lord our God. This is an ordinance for euer to Israel.

5 And the house which I build, is great: for great is our God aboue all gods.

7 Send me now therefore a man, cunning to worke in gold and in siluer, and in brasse, and in yron, and in purple and crimson, and blew, and that can skil to graue, with the cunning men that are with me in Iudah, and in Ierusalem, whome Dauid my father did prouide.

8 Send me also Cedar trees, firre trees, and Algume trees, out of Lebanon: (for I know that thy seruants can skill to cut timber in Lebanon) and behold, my seruants shalbe with thy seruants,

9 Euen to prepare me timber in abundance: for the house which I am about to build, shalbe wonderfull great.

11 ¶ Then Huram the king of Tyre answered in writing, which hee sent to Solomon: Because the Lord hath loued his people, hee hath made thee King ouer them.

12 Huram said moreouer, Blessed be the Lord God of Israel that made heauen and earth, who hath giuen to Dauid the King a wise sonne, indued with prudence and vnderstanding, that might build an house for the Lord, and an house for his kingdome.

13 And now I haue sent a cunning man (indued with vnderstanding) of Huram my fathers:

14 The sonne of a woman of the daughters of Dan, and his father was a man of Tyre, skilfull to worke in golde and in siluer, in brasse, in yron, in stone and in timber, in purple, in blew, and in fine linen, and in crimson: also to graue any maner of grauing, and to find out euery deuice which shall be put to him, with thy cunning men, and with the cunning men of my lord Dauid thy father.

15 Now therefore the wheate and the barley, the oyle and the wine, which my lord hath spoken of, let him send vnto his seruants:

16 And wee will cut wood out of Lebanon, as much as thou shalt need, and wee will bring it to thee in flotes by sea to Ioppa, and thou shalt carie it vp to Ierusalem.

17 ¶ And Solomon numbred all the strangers that were in the lande of Israel, after the numbring wherewith Dauid his father had numbred them: and they were found an hundred and fiftie thousand, and three thousand and sixe hundred.

18 And he set threescore and ten thousand of them to be bearers of burdens, and fourescore thousand to be hewers in the mountaine, and three thousand and sixe hundred ouerseers to set the people a worke.

Solomon's message to Huram respecting the temple, His treaty with Huram.

- Solomon informs Huram of the particular services to be performed in the temple. The mysteries of the true religion, unlike those of the Gentile superstitions, sought not concealment. Solomon endeavoured to possess Huram with great and high thoughts of the God of Israel. We should not be afraid or ashamed to embrace every opportunity to speak of God, and to impress others with a deep sense of the importance of his favour and service. Now that the people of Israel kept close to the law and worship of God, the neighbouring nations were willing to be taught by them in the true religion, as the Israelites had been willing in the days of their apostacy, to be infected with the idolatries and superstitions of their neighbours. A wise and pious king is an evidence of the Lord's special love for his people. How great then was God's love to his believing people, in giving his only-begotten Son to be their Prince and their Saviour.

View All Discussusion for 2 Chronicles Chapter 2... 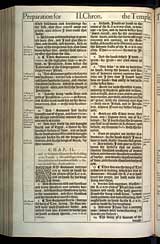