1 So Abiiah slept with his fathers, and they buried him in the citie of Dauid, and Asa his sonne reigned in his stead: in his dayes the land was quiet ten yeeres.

2 And Asa did that which was good and right in the eyes of the Lord his God.

3 For hee tooke away the altars of the strange gods, and the high places, and brake downe the images, and cut downe the groues:

4 And commanded Iudah to seeke the Lord God of their fathers, and to do the Law, and the Commandement.

5 Also he tooke away out of all the cities of Iudah, the high places and the images: and the kingdome was quiet before him.

6 ¶ And hee built fenced cities in Iudah; for the land had rest, and hee had no warre in those yeeres; because the Lord had giuen him rest.

7 Therefore hee said vnto Iudah, Let vs build these cities, & make about them walles, and towers, gates and barres, while the land is yet before vs: because wee haue sought the Lord our God, wee haue sought him, and hee hath giuen vs rest on euery side: so they built, and prospered.

8 And Asa had an armie of men that bare targets and speares, out of Iudah three hundred thousand, and out of Beniamin, that bare shields and drew bowes, two hundred and fourescore thousand: all these were mighty men of valour.

9 ¶ And there came out against them Zerah the Ethiopian, with an host of a thousand thousand, and three hundred charets, and came vnto Mareshah.

10 Then Asa went out against him, and they set the battel in aray in the valley of Zephathah at Mareshah.

11 And Asa cried vnto the Lord his God, and said, Lord, it is nothing with thee to helpe, whether with many, or with them that haue no power. Helpe vs, O Lord our God, for we rest on thee, and in thy Name wee goe against this multitude: O Lord thou art our God, let not man preuaile against thee.

13 And Asa and the people that were with him, pursued them vnto Gerar: and the Ethiopians were ouerthrown, that they could not recouer themselues, for they were destroyed before the Lord, and before his hoste, and they caried away very much spoile.

14 And they smote all the cities round about Gerar, for the feare of the Lord came vpon them: and they spoiled all the cities, for there was exceeding much spoile in them.

15 They smote also the tents of cattell, and caried away sheepe and camels inabundance, and returned to Ierusalem.

Asa's piety, He strengthens his kingdom.

- Asa aimed at pleasing God, and studied to approve himself to him. Happy those that walk by this rule, not to do that which is right in their own eyes, or in the eye of the world, but which is so in God's sight. We find by experience that it is good to seek the Lord; it gives us rest; while we pursue the world, we meet with nothing but vexation. Asa consulted with his people how to make a good use of the peace they enjoyed; and concluded with them that they must not be idle, nor secure. A formidable army of Ethiopians invaded Asa's kingdom. This evil came upon them, that their faith in God might be tried. Asa's prayer is short, but it is the real language of faith and expectation from God. When we go forth in God's name, we cannot but prosper, and all things work together for the good of those whom he favours.

View All Discussusion for 2 Chronicles Chapter 14... 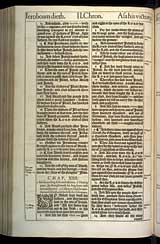