1 And when Rehoboam was come to Ierusalem, he gathered of the house of Iudah and Beniamin, an hundred and fourescore thousand chosen men, which were warriers, to fight against Israel, that hee might bring the kingdome againe to Rehoboam.

2 But the worde of the Lord came to Shemaiah the man of God, saying,

3 Speake vnto Rehoboam the son of Solomon, king of Iudah, and to all Israel in Iudah & Beniamin, saying,

4 Thus saith the Lord; Ye shall not goe vp, nor fight against your brethren: returne euery man to his house, for this thing is done of me. And they obeyed the words of the Lord, and returned from going against Ieroboam.

5 ¶ And Rehoboam dwelt in Ierusalem, and built cities for defence in Iudah.

6 He built euen Bethlehem, and Etam, and Tekoa,

7 And Bethzur, and Shoco, and Adullam,

8 And Gath, and Maresha, and Ziph,

9 And Adoraim, and Lachish, and Azekah,

10 And Zorah, and Aialon, and Hebron, which are in Iudah and in Beniamin, fenced cities.

11 And he fortified the strong holds, and put captaines in them, and store of vitaile, and of oyle and wine.

12 And in euery seuerall citie he put shields and speares, and made them exceeding strong, hauing Iudah and Beniamin on his side.

13 ¶ And the Priests and the Leuites that were in all Israel, resorted to him out of all their coasts.

14 For the Leuites left their suburbs, and their possession, and came to Iudah and Ierusalem: for Ieroboam and his sonnes had cast them off from executing the Priests office vnto the Lord.

17 So they strengthened the kingdome of Iudah, and made Rehoboam the sonne of Solomon strong, three yeeres: for three yeeres they walked in the way of Dauid and Solomon.

20 And after her, hee tooke Maacah the daughter of Absalom, which bare him Abiiah, and Atthai, and Ziza, and Shelomith.

22 And Rehoboam made Abiiah the sonne of Maacah the chiefe, to be ruler among his brethren: for he thought to make him king.

23 And he dealt wisely, and dispersed of all his children throughout all the countries of Iudah and Beniamin, vnto euery fenced citie: and he gaue them vitaile in abundance: and hee desired many wiues.

Rehoboam forbidden to war against Israel. (1-12) The priests and Levites find refuge in Judah. (13-23)1-12 A few good words might have prevented the rebellion of Rehoboam's subjects; but all the force of his kingdom cannot bring them back. And it is in vain to contend with the purpose of God, when it is made known to us. Even those who are destitute of true faith, will at times pay some regard to the word of God, and be kept by it from wrong actions, to which they are prone by nature.

13-23 When the priests and Levites came to Jerusalem, the devout, pious Israelites followed them. Such as set their hearts to seek the Lord God of Israel, left the inheritance of their fathers, and went to Jerusalem, that they might have free access to the altar of God, and be out of the temptation to worship the calves. That is best for us, which is best for our souls; in all our choices, religious advantages must be sought before all outward conveniences. Where God's faithful priests are, his faithful people should be. And when it has been proved that we are willing to renounce our worldly interests, so far as we are called to do so for the sake of Christ and his gospel, we have good evidence that we are truly his disciples. And it is the interest of a nation to protect religion and religious people.

View All Discussusion for 2 Chronicles Chapter 11... 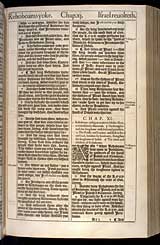