1 And Solomon the sonne of Dauid was strengthned in his kingdome, and the Lord his God was with him, & magnified him exceedingly.

2 Then Solomon spake vnto all Israel, to the captaines of thousands, and of hundreds, and to the Iudges, and to euery gouernour in all Israel, the chiefe of the fathers.

3 So Solomon and all the Congregation with him, went to the high place that was at Gibeon, for there was the Tabernacle of the Congregation of God, which Moses the seruant of the Lord had made in the wildernesse.

4 But the Arke of God had Dauid brought vp from Kiriath-iearim, to the place which Dauid had prepared for it: for he had pitched a tent for it at Ierusalem.

5 Moreouer the brasen Altar that Bezaleel the sonne of Uri, the sonne of Hur, had made, hee put before the Tabernacle of the Lord: and Solomon and the Congregation sought vnto it.

6 And Solomon went vp thither to the brasen Altar before the Lord, which was at the Tabernacle of the Congregation, and offered a thousand burnt offerings vpon it.

7 ¶ In that night did God appeare vnto Solomon, and saide vnto him; Aske what I shall giue thee.

8 And Solomon saide vnto God, Thou hast shewed great mercy vnto Dauid my father, and hast made me to reigne in his stead:

9 Now, O Lord God, let thy promise vnto Dauid my father be established: for thou hast made mee King ouer a people, like the dust of the earth in multitude.

10 Giue mee now wisedome and knowledge, that I may goe out and come in before this people. For who can iudge this thy people, that is so great?

11 And God said to Solomon, Because this was in thine heart, and thou hast not asked riches, wealth, or honour, nor the life of thine enemies, neither yet hast asked long life; but hast asked wisedome and knowledge for thy selfe, that thou mayest iudge my people, ouer whom I haue made thee King:

12 Wisedome and knowledge is granted vnto thee, and I will giue thee riches, and wealth, and honour, such as none of the kings haue had, that haue beene before thee, neither shall there any after thee haue the like.

13 ¶ Then Solomon came from his iourney to the high place that was at Gibeon, to Ierusalem, from before the Tabernacle of the Congregation, and reigned ouer Israel.

14 And Solomon gathered charets and horsemen: and hee had a thousand and foure hundred charets, and twelue thousand horsemen, which he placed in the charet-cities, and with the King at Ierusalem.

15 And the King made siluer and gold at Ierusalem as plenteous as stones, and Cedar trees made hee as the Sycomore trees, that are in the vale for abundance.

16 And Solomon had horses brought out of Egypt, and linen yarne: the Kings merchants receiued the linnen yarne at a price.

17 And they fetcht vp and brought foorth out of Egypt, a charet for sixe hundred shekels of siluer, and an horse for an hundred and fiftie: and so brought they out horses for all the kings of the Hittites, and for the kings of Syria, by their meanes.

Solomon's choice of wisdom, His strength and wealth.

- SOLOMON began his reign with a pious, public visit to God's altar. Those that pursue present things most eagerly, are likely to be disappointed; while those that refer themselves to the providence of God, if they have not the most, have the most comfort. Those that make this world their end, come short of the other, and are disappointed in this also; but those that make the other world their end, shall not only obtain that, and full satisfaction in it, but shall have as much of this world as is good for them, in their way. Let us then be contented, without those great things which men generally covet, but which commonly prove fatal snares to the soul.

View All Discussusion for 2 Chronicles Chapter 1... 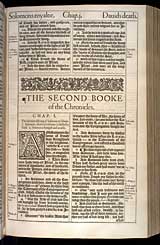