1 For your selues, brethren, knowe our entrance in vnto you, that it was not in vaine.

2 But euen after that wee had suffered before, and were shamefully entreated, as ye know, at Philippi, wee were bold in our God, to speake vnto you the Gospel of God with much contention.

3 For our exhortation was not of deceite, nor of vncleannesse, nor in guile:

4 But as we were allowed of God to bee put in trust with the Gospel, euen so wee speake, not as pleasing men, but God, which trieth our hearts.

5 For neither at any time vsed wee flattering wordes, as yee knowe, nor a cloke of couetousnesse, God is witnesse:

6 Nor of men sought we glorie, neither of you, nor yet of others, when we might haue beene burdensome, as the Apostles of Christ.

7 But wee were gentle among you, euen as a nurse cherisheth her children:

8 So being affectionately desirous of you, we were willing to haue imparted vnto you, not the Gospel of God only, but also our owne soules, because ye were deare vnto vs.

9 For yee remember, brethren, our labour and trauaile: for labourng night and day, because wee would not bee chargeable vnto any of you, wee preached vnto you the Gospel of God.

10 Yee are witnesses, and God also, how holily, and iustly, and vnblameably wee behaued our selues among you that beleeue.

11 As you know, how wee exhorted and comforted, and charged euery one of you, (as a father doeth his children,)

12 That ye would walke worthy of God, who hath called you vnto his kingdome and glory.

14 For yee, brethren, became followers of the Churches of God, which in Iudea are in Christ Iesus: for ye also haue suffered like things of your owne countreymen, euen as they haue of the Iewes:

15 Who both killed the Lord Iesus, and their owne Prophets, and haue persecuted vs: and they please not God, and are contrary to all men:

16 Forbidding vs to speake to the Gentiles, that they might bee saued, to fill vp their sinnes alway: for the wrath is come vpon them to the vttermost.

17 But wee, brethren, beeing taken from you for a short time, in presence, not in heart, endeuored the more abundantly to see your face with great desire.

18 Wherefore we would haue come vnto you (euen I Paul) once & againe: but Satan hindered vs.

19 For what is our hope, or ioy, or crowne of reioycing? Are not euen ye in the presence of our Lord Iesus Christ at his comming?

The apostle reminds the Thessalonians of his preaching and behaviour. (1-12) And of their receiving the gospel as the word of God. (13-16) His joy on their account. (17-20)1-6 The apostle had no wordly design in his preaching. Suffering in a good cause should sharpen holy resolution. The gospel of Christ at first met with much opposition; and it was preached with contention, with striving in preaching, and against opposition. And as the matter of the apostle's exhortation was true and pure, the manner of his speaking was without guile. The gospel of Christ is designed for mortifying corrupt affections, and that men may be brought under the power of faith. This is the great motive to sincerity, to consider that God not only sees all we do, but knows our thoughts afar off, and searches the heart. And it is from this God who trieth our hearts, that we must receive our reward. The evidences of the apostle's sincerity were, that he avoided flattery and covetousness. He avoided ambition and vain-glory.

7-12 Mildness and tenderness greatly recommend religion, and are most conformable to God's gracious dealing with sinners, in and by the gospel. This is the way to win people. We should not only be faithful to our calling as Christians, but in our particular callings and relations. Our great gospel privilege is, that God has called us to his kingdom and glory. The great gospel duty is, that we walk worthy of God. We should live as becomes those called with such a high and holy calling. Our great business is to honour, serve, and please God, and to seek to be worthy of him.

13-16 We should receive the word of God with affections suitable to its holiness, wisdom, truth, and goodness. The words of men are frail and perishing, like themselves, and sometimes false, foolish, and fickle; but God's word is holy, wise, just, and faithful. Let us receive and regard it accordingly. The word wrought in them, to make them examples to others in faith and good works, and in patience under sufferings, and in trials for the sake of the gospel. Murder and persecution are hateful to God, and no zeal for any thing in religion can excuse it. Nothing tends more to any person or people's filling up the measure of their sins, than opposing the gospel, and hindering the salvation of souls. The pure gospel of Christ is abhorred by many, and the faithful preaching of it is hindered in many ways. But those who forbid the preaching it to sinners, to men dead in sin, do not by this please God. Those have cruel hearts, and are enemies to the glory of God, and to the salvation of his people, who deny them the Bible.

17-20 This world is not a place where we are to be always, or long together. In heaven holy souls shall meet, and never part more. And though the apostle could not come to them yet, and thought he might never be able to come, yet our Lord Jesus Christ will come; nothing shall hinder that. May God give faithful ministers to all who serve him with their spirit in the gospel of his Son, and send them to all who are in darkness

View All Discussusion for 1 Thessalonians Chapter 2... 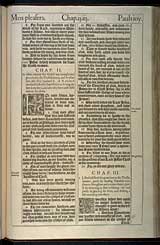