2 And he had a sonne, whose name was Saul, a choice young man, and a goodly: and there was not among the children of Israel a goodlier person then hee: from his shoulders and vpward, hee was higher then any of the people.

3 And the asses of Kish, Sauls father, were lost; and Kish said to Saul his sonne, Take nowe one of the seruants with thee, and arise, goe seeke the asses.

5 And when they were come to the land of Zuph, Saul said to his seruant that was with him, Come, and let vs returne, lest my father leaue caring for the asses, and take thought for vs.

6 And hee said vnto him, Behold now, there is in this citie a man of God, and he is an honourable man; all that he saith, commeth surely to passe: Now let vs goe thither; peraduenture he can shew vs our way that we should goe.

7 Then said Saul to his seruaunt, But behold, if we goe, what shall wee bring the man? for the bread is spent in our vessels, and there is not a present to bring to the man of God: What haue wee?

8 And the seruant answered Saul againe, and said, Behold, I haue here at hand the fourth part of a shekel of siluer; that wil I giue to the man of God, to tell vs our way.

9 (Beforetime in Israel, when a man went to enquire of God, thus he spake; Come, and let vs go to the Seer: for he that is now called a Prophet, was beforetime called a Seer.)

10 Then said Saul to his seruant, Wel said, come, let vs go: so they went vnto the city where the man of God was.

11 ¶ And as they went vp the hill to the city, they found yong maydens going out to draw water, and said vnto them, Is the Seer here?

12 And they answered them, and said, He is: behold, he is before you, make haste now: for he came to day to the citie; for there is a sacrifice of the people to day in the hie place.

13 Assoone as ye be come into the citie, ye shall straightway finde him, before he goe vp to the high place to eate: for the people will not eate vntill hee come, because he doth blesse the sacrifice, and afterwards they eat that be bidden: Now therefore get you vp, for about this time ye shall finde him.

14 And they went vp into the citie: and when they were come into the citie, behold, Samuel came out against them, for to goe vp to the hie place.

15 ¶ Now the Lord had told Samuel in his eare a day before Saul came, saying,

16 To morrow about this time I will send thee a man out of the land of Beniamin, and thou shalt anoynt him to be Captaine ouer my people Israel, that he may saue my people out of the hand of the Philistines: for I haue looked vpon my people, because their cry is come vnto me.

17 And when Samuel saw Saul, the Lord said vnto him, Behold the man whom I spake to thee of: this same shall reigne ouer my people.

18 Then Saul drew neere to Samuel in the gate, and said, Tell me, I pray thee, where the Seers house is.

19 And Samuel answered Saul, and said, I am the Seer: Goe vp before me vnto the high place, for ye shall eate with me to day, and to morrow I will let thee goe, and will tell thee all that is in thine heart.

20 And as for thine asses that were lost three dayes agoe, set not thy minde on them, for they are found: And on whom is all the desire of Israel? is it not on thee, & on all thy fathers house?

21 And Saul answered, and said, Am not I a Beniamite, of the smallest of the tribes of Israel? and my family the least of all the families of the tribe of Beniamin? Wherefore then speakest thou so to me?

22 And Samuel tooke Saul, and his seruant, and brought them into the parlour, & made them sit in the chiefest place among them that were bidden, which were about thirtie persons.

23 And Samuel said vnto the cooke, Bring the portion which I gaue thee, of which I said vnto thee, Set it by thee.

24 And the cooke took vp the shoulder, and that which was vpon it, and set it before Saul, and Samuel said, Behold, that which is left, set it before thee, and eate: for vnto this time hath it bene kept for thee, since I said I haue inuited the people: So Saul did eat with Samuel that day.

25 ¶ And when they were come downe from the high place into the citie, Samuel communed with Saul vpon the top of the house.

26 And they arose early: and it came to passe about the spring of the day, that Samuel called Saul to the top of the house, saying, Up, that I may send thee away: And Saul arose, and they went out both of them, hee and Samuel, abroad.

27 And as they were going downe to the end of the city, Samuel said to Saul, Bid the seruant passe on before vs, (and he passed on) but stand thou still a while, that I may shew thee the word of God.

Saul is brought to Samuel. (1-10) Samuel told concerning Saul. (11-17) Samuel's treatment of Saul. (18-27)1-10 Saul readily went to seek his father's asses. His obedience to his father was praise-worthy. His servant proposed, that since they were now at Ramah, they should call on Samuel, and take his advice. Wherever we are, we should use our opportunities of acquainting ourselves with those who are wise and good. Many will consult a man of God, if he comes in their way, that would not go a step out of their way to get wisdom. We sensibly feel worldly losses, and bestow much pains to make them up; but how little do we attempt, and how soon are we weary, in seeking the salvation of our souls! If ministers could tell men how to secure their property, or to get wealth, they would be more consulted and honoured than they now are, though employed in teaching them how to escape eternal misery, and to obtain eternal life. Most people would rather be told their fortune than their duty. Samuel needed not their money, nor would he have denied his advice, if they had not brought it; but they gave it to him as a token of respect, and of the value they put upon his office, and according to the general usage of those times, always to bring a present to those in authority.

11-17 The very maid-servants of the city could direct to the prophet. They had heard of the sacrifice, and could tell of the necessity for Samuel's presence. It is no small benefit to live in religious and holy places. And we should always be ready to help those who are seeking after God's prophets. Though God had, in displeasure, granted Israel's request for a king, yet he sends them a man to be captain over them, to save them out of the hand of the Philistines. He does it, listening graciously to their cry.

18-27 Samuel, that good prophet, was so far from envying Saul, or bearing him any ill-will, that he was the first and most forward to do him honour. Both that evening and early the next morning, Samuel communed with Saul upon the flat roof of the house. We may suppose Samuel now convinced Saul that he was the person God had fixed upon for the government, and of his own willingness to resign. How different are the purposes of the Lord for us, from our intentions for ourselves! Perhaps Saul was the only one who ever went out to seek asses, and literally found a kingdom; but many have set out and moved their dwellings to seek riches and pleasures, who have been guided to places where they found salvation for their souls. Thus they have met with those who addressed them as if aware of the secrets of their lives and hearts, and have been led seriously to regard the word of the Lord. If this has been our case, though our worldly plans have not prospered, let us not care for that; the Lord has given us, or has prepared us for, what is far better.

View All Discussusion for 1 Samuel Chapter 9... 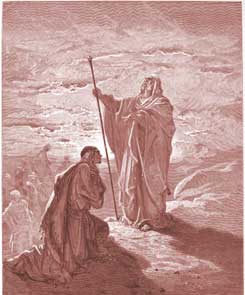 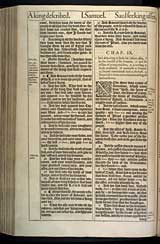