2 And it came to passe while the Arke abode in Kiriath-iearim, that the time was long: for it was twentie yeeres: and all the house of Israel lamented after the Lord.

3 ¶ And Samuel spake vnto all the house of Israel, saying, If ye doe returne vnto the Lord with all your hearts, then put away the strange gods, and Ashtaroth from among you, and prepare your hearts vnto the Lord, and serue him onely: & he will deliuer you out of the hand of the Philistines.

4 Then the children of Israel did put away Baalim, and Ashtaroth, and serued the Lord onely.

5 And Samuel said, Gather all Israel to Mizpeh, and I will pray for you vnto the Lord.

6 And they gathered together to Mizpeh, and drew water, and powred it out before the Lord, and fasted on that day, and said there, We haue sinned against the Lord. And Samuel iudged the children of Israel in Mizpeh.

8 And the children of Israel said to Samuel, Cease not to crie vnto the Lord our God for vs, that he will saue vs out of the hand of the Philistines.

9 ¶ And Samuel tooke a sucking lambe, and offered it for a burnt offering wholly vnto the Lord; and Samuel cried vnto the Lord for Israel, and the Lord heard him.

10 And as Samuel was offering vp the burnt offering, the Philistines drewe neere to battell against Israel: but the Lord thundred with a great thunder on that day vpon the Philistines, and discomfited them, and they were smitten before Israel.

11 And the men of Israel went out of Mizpeh, and pursued the Philistines, and smote them, vntill they came vnder Bethcar.

12 Then Samuel tooke a stone, and set it betweene Mizpeh and Shen, and called the name of it Eben-Ezer, saying, Hitherto hath the Lord helped vs.

13 ¶ So the Philistines were subdued, and they came no more into the coast of Israel: and the hand of the Lord was against the Philistines, all the dayes of Samuel.

14 And the cities which the Philistines had taken from Israel, were restored to Israel, from Ekron euen vnto Gath, and the coasts thereof did Israel deliuer out of the hands of the Philistines: and there was peace betweene Israel and the Amorites.

15 And Samuel iudged Israel all the dayes of his life.

16 And he went from yeere to yeere in circuit to Bethel, and Gilgal, and Mizpeh, and iudged Israel in all those places.

17 And his returne was to Ramah: for there was his house: and there hee iudged Israel, and there hee built an altar vnto the Lord.

The ark removed to Kirjath-jearim. (1-4) The Israelites solemnly repent. (5,6) The Lord discomfits the Philistines. (7-12) They are subdued, Samuel judges Israel. (13-17)1-4 God will find a resting-place for his ark; if some thrust it from them, the hearts of others shall be inclined to receive it. It is no new thing for God's ark to be in a private house. Christ and his apostles preached from house to house, when they could not have public places. Twenty years passed before the house of Israel cared for the want of the ark. During this time the prophet Samuel laboured to revive true religion. The few words used are very expressive; and this was one of the most effectual revivals of religion which ever took place in Israel.

5,6 Israel drew water and poured it out before the Lord; signifying their humiliation and sorrow for sin. They pour out their hearts in repentance before the Lord. They were free and full in their confession, and fixed in their resolution to cast away from them all their wrong doings. They made a public confession, We have sinned against the Lord; thus giving glory to God, and taking shame to themselves. And if we thus confess our sins, we shall find our God faithful and just to forgive us our sins.

7-12 The Philistines invaded Israel. When sinners begin to repent and reform, they must expect that Satan will muster all his force against them, and set his instruments at work to the utmost, to oppose and discourage them. The Israelites earnestly beg Samuel to pray for them. Oh what a comfort it is to all believers, that our great Intercessor above never ceases, is never silent! for he always appears in the presence of God for us. Samuel's sacrifice, without his prayer, had been an empty shadow. God gave a gracious answer. And Samuel erected a memorial of this victory, to the glory of God, and to encourage Israel. Through successive generations, the church of God has had cause to set up Eben-ezers for renewed deliverances; neither outward persecutions nor inward corruptions have prevailed against her, because "hitherto the Lord hath helped her:" and he will help, even to the end of the world.

13-17 In this great revival of true religion, the ark was neither removed to Shiloh, nor placed with the tabernacle any where else. This disregard to the Levitical institutions showed that their typical meaning formed their chief use; and when that was overlooked, they became a lifeless service, not to be compared with repentance, faith, and the love of God and man.

View All Discussusion for 1 Samuel Chapter 7... 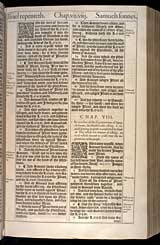