1 And the Arke of the Lord was in the countrey of the Philistines seuen moneths.

2 And the Philistines called for the priests and the diuiners, saying, What shall we doe to the Arke of the Lord ? Tell vs wherewith we shall send it to his place?

3 And they said, If yee send away the Arke of the God of Israel, send it not empty: but in any wise returne him a trespasse offring: then ye shall be healed, and it shall be knowen to you, why his hand is not remooued from you.

4 Then said they, What shall be the trespasse offering, which wee shall returne to him? They answered, Fiue golden Emerods, and fiue golden mice, according to the number of the lordes of the Philistines: for one plague was on you all, and on your lords.

6 Wherefore then doe yee harden your hearts, as the Egyptians and Pharaoh hardened their hearts? when he had wrought wonderfully among them, did they not let the people goe, and they departed?

7 Now therefore make a new cart, and take two milch-kine, on which there hath come no yoke, and tie the kine to the cart, and bring the calues home from them.

8 And take the Arke of the Lord, and lay it vpon the cart, and put the iewels of golde, which ye returne him for a trespasse offering, in a coffer by the side thereof, and send it away, that it may goe.

9 And see, if it goeth vp by the way of his owne coast to Bethshemesh, then he hath done vs this great euill: but if not, then wee shall know that it is not his hand that smote vs; it was a chance that happened to vs.

10 ¶ And the men did so: and tooke two milch-kine, and tied them to the cart, and shut vp their calues at home.

11 And they layde the Arke of the Lord vpon the cart, and the coffer, with the mice of golde, and the images of their Emerods.

12 And the kine tooke the straight way to the way of Bethshemesh, and went along the high way, lowing as they went, and turned not aside to the right hand, or to the left: and the lords of the Philistines went after them, vnto the border of Bethshemesh.

13 And they of Bethshemesh were reaping their wheat haruest in the valley: and they lifted vp their eyes, and saw the Arke, and reioyced to see it.

14 And the cart came into the field of Ioshua a Bethshemite, & stood there, where there was a great stone: and they claue the wood of the cart, and offered the kine, a burnt offering vnto the Lord.

15 And the Leuites tooke downe the Arke of the Lord, and the coffer that was with it, wherein the iewels of golde were, and put them on the great stone: And the men of Bethshemesh offered burnt offrings, and sacrificed sacrifices the same day vnto the Lord.

16 And when the fiue lordes of the Philistines had seene it, they returned to Ekron the same day.

17 And these are the golden Emerods which the Philistines returned for a trespasse offering vnto the Lord; for Ashdod one, for Gaza one, for Askelon one, for Gath one, for Ekron one.

18 And the golden Mice according to the number of all the cities of the Philistines, belonging to the fiue lordes, both of fenced cities, and of countrey villages, euen vnto the great stone of Abel, whereon they set downe the Arke of the Lord; which stone remaineth vnto this day, in the field of Ioshua the Bethshemite.

19 ¶ And he smote the men of Bethshemesh, because they had looked into the Arke of the Lord, euen he smote of the people fiftie thousand, and threescore and tenne men: and the people lamented, because the Lord had smitten many of the people with a great slaughter.

20 And the men of Bethshemesh said, Who is able to stand before this holy Lord God? and to whom shal he goe vp from vs?

21 ¶ And they sent messengers to the inhabitants of Kiriath-iearim, saying, The Philistines haue brought againe the Arke of the Lord; come ye downe, and fetch it vp to you.

The Philistines consult how to send back the ark. (1-9) They bring it to Bethshemesh. (10-18) The people smitten for looking into the ark. (19-21)1-9 Seven months the Philistines were punished with the presence of the ark; so long it was a plague to them, because they would not send it home sooner. Sinners lengthen out their own miseries by refusing to part with their sins. The Israelites made no effort to recover the ark. Alas! where shall we find concern for religion prevail above all other matters? In times of public calamity we fear for ourselves, for our families, and for our country; but who cares for the ark of God? We are favoured with the gospel, but it is treated with neglect or contempt. We need not wonder if it should be taken from us; to many persons this, though the heavies of calamities, would occasion no grief. There are multitudes whom any profession would please as well as that of Christianity. But there are those who value the house, the word, and the ministry of God above their richest possessions, who dread the loss of these blessings more than death. How willing bad men are to shift off their convictions, and when they are in trouble, to believe it is a chance that happens; and that the rod has no voice which they should hear or heed!

10-18 These two kine knew their owner, their great Owner, whom Hophin and Phinehas knew not. God's providence takes notice even of brute creatures, and serves its own purposes by them. When the reapers saw the ark, they rejoiced; their joy for that was greater than the joy of harvest. The return of the ark, and the revival of holy ordinances, after days of restraint and trouble, are matters of great joy.

19-21 It is a great affront to God, for vain men to pry into, and meddle with the secret things which belong not to them, #De 29:29; Col 2:18|. Man was ruined by desiring forbidden knowledge. God will not suffer his ark to be profaned. Be not deceived, God is not mocked. Those that will not fear his goodness, and reverently use the tokens of his grace, shall be made to feel his justice. The number smitten is expressed in an unusual manner in the original, and it is probable that it means 1170. They desire to be rid of the ark. Foolish men run from one extreme to the other. They should rather have asked, How may we have peace with God, and recover his favor? #Mic 6:6,7|. Thus, when the word of God works with terror on sinners' consciences, they, instead of taking the blame and shame to themselves, quarrel with the word, and put that from them. Many stifle their convictions, and put salvation away from them.

View All Discussusion for 1 Samuel Chapter 6... 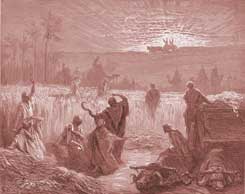 The Ark Is Returned to Beth-shemesh 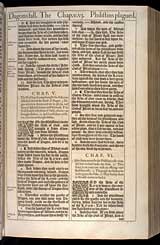